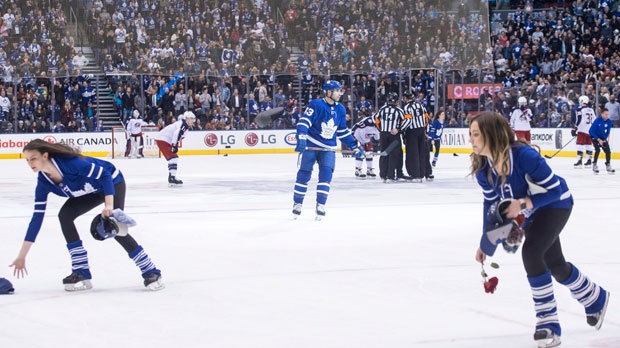 Toronto Maple Leafs Nazem Kadri skates by as hats are thrown onto the ice after he scored his third goal against the Columbus Blue Jackets during third period NHL hockey action in Toronto on Wednesday, February 14 , 2018.THE CANADIAN PRESS/Chris Young

TORONTO -- All it took was a subtle change of the forward lines to unlock some new-found offence.

Nazem Kadri picked up his fourth-career hat trick and recorded a career-high five points as the Toronto Maple Leafs defeated the Columbus Blue Jackets 6-3 on Wednesday.

"My linemates contributed just as much as I did," Kadri said. "They found me, I just tried to get open, and the puck seemed to find me tonight."

The production far exceeds what Kadri and Marleau managed with Leo Komarov, their regular linemate for a large chunk of the season.

"I'm not sure," Leafs coach Mike Babcock said when asked about the change in the lineup. "I used them together, Kadri and Marner, last year and they were no good together. That's the beauty of having more players. You move them around and once in awhile you get lucky."

Frederik Andersen made a career-high 54 saves for the Maple Leafs (35-19-5), who went 5-0-0 on their homestand. It was the first time they have swept a homestand of five games or more in franchise history.

"I had a clean view of most of the shots, and I think that was the key to withstand all of that," Andersen said.

The Blue Jackets (29-24-4) recorded 50 or more shots in their third straight game, making them the first team to accomplish the feat in the post-expansion era (since 1967-68).

Joonas Korpisalo made 22 saves in defeat.

The Leafs played much of the game without defenceman Jake Gardiner, who left the game after one period of play with a lower-body injury.

"I'm not exactly sure how it happened. He's got some kind of spasm or something like that," Babcock said. "He just couldn't get it to relax or whatever so they (Toronto's medical staff) wouldn't let him come back."

Toronto opened the scoring when Dominic Moore scored his fifth goal of the season while on a 2-on-1. With David Savard taking away the passing lane to Kasperi Kapanen, Moore took a backhanded shot and beat Korpisalo. Roman Polak and Travis Dermott collected the assists at 4:38.

The Leafs added to its lead when Kadri cut around Koripsalo before using a screen to score his first goal of the game to make it 2-0. James van Riemsdyk and Morgan Rielly collected assists at 7:36.

The Blue Jackets cut Toronto's lead in half when Nick Foligno received a centring pass from Alexander Wennberg and fired a backhander past Andersen. Dean Kukan picked up the secondary assist at 18:21.

Foligno scored his second goal of the game early in the second period. He received a pass from Wennberg on a 2-on-1 to beat Andersen. Oliver Bjorkstrand picked up the secondary assist at 2:25.

Kadri replied with his second goal of the night to reclaim the lead for Toronto. Rielly's centring pass went straight to Kadri near the Columbus net and beat Korpisalo with a one-timer to make it 3-2. Dermott picked up another assist at 8:03.

Toronto restored its two-goal lead when Kadri centred a pass to Marner, who beat Korpisalo on a one-timer to make it 4-2. Marleau also picked up an assist at 10:17.

Jack Johnson fired a slap shot from the left circle that beat Andersen and went off the post and into the net to cut the Leafs lead to 4-3. Foligno and Markus Nutivaara picked up assists at 14:35.

Kadri completed the hat trick at 11:21 of the third period. Marleau and Marner collected assists.

"I saw Pat in front and Naz sneaking in backdoor," Marner said of setting up Kadri's third goal. "Lucky enough it got through."

Marleau then scored an empty-net goal at 18:13. Komarov and Kadri collected assists.