A frustrated restaurateur is blaming the “never ending” LRT construction on Eglinton Avenue for the closure of his two-and-a-half-year-old Prohibition Gastrohouse.

Michael Summerfield opened near the bustling Yonge and Eglinton intersection based on the popularity of his Queen Street East location downtown. But he says the LRT construction ruined his business.

“It's a direct result of the construction apocalypse. It is truly an apocalypse,” Summerfield said.

Summerfield said he sold his house to try to keep the restaurant above water until the construction is expected to end in 2021, but that didn’t work. He adds, the closure didn’t come as a surprise to people who knew what was happening.

“It’s not a surprise to our vendors, our staff, our guests, you know, the community in general. However it doesn't make things better.”

When Michael Perrella heard the news that the bar across from his Second Cup location was shutting down he said it hit “a little close to home.”

He’s been running his coffee shop for a decade, but admits it hasn’t been easy since the LRT construction began.

“It’s been a struggle, hasn’t been easy for sure. Had to tighten your belt.”

And while he believes things will improve once the construction finishes, he’s not confident he’ll be able to keep tightening his belt to get there.

For customers, news of the closure is disappointing. Cassandra Kong was shocked when she found the front doors locked on Friday afternoon. “It’s a little sad to see that a neighbourhood pub just shuts down because of construction,” she said.

The local city councillor said while he never heard from Summerfield, he has heard similar stories of struggle from other business owners all along the LRT path.

Josh Matlow has represented the area for nine years. “The LRT has been a dream for a long time, but the construction is a nightmare,” he said. 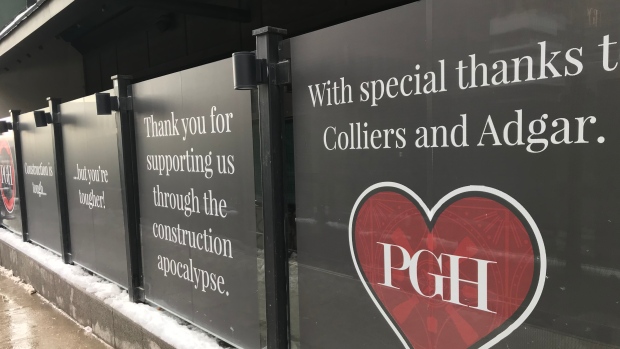 He wants to see governments factor in the business costs when projects like this are developed.

“We all want more transit projects built in the future. The government better darn well have a better plan not just to support the project, but to make sure that these businesses aren’t collateral damage.”

Mayor John Tory agrees, saying at a news conference Friday morning, “Might we look at ways in which we can sort of provide some degree of recognition of the financial impact on businesses? I think we can. But it’s a very complicated matter because of what I said, how do you decide who gets it?”

Summerfield says he will move on from this and try to expand his business elsewhere in the city.

But he’s leaving Eglinton Avenue with a bad taste in his mouth.