Ontario’s political parties may be able to sway some voters in ridings that were close calls in 2018 based on their housing affordability and rent control policies.

According to data provided by Environics Analytics, about 12 per cent of Ontario households intend to buy real estate in the next year.

According to Senior Vice President Rupen Seoni, the voting populations that have said they intend to purchase property are suburban households in the Greater Toronto Area and Ottawa, as well as smaller city suburban families and Ontarians living in neighbourhoods with large concentrations of newer Canadians.

All three of these voter groupings voted primarily Progressive Conservative in 2018.

“While home prices in these areas are not low, they are not the most expensive parts of the province,” he said.

Voters living in ridings with the lowest home values were also least likely to be interested in buying a home. 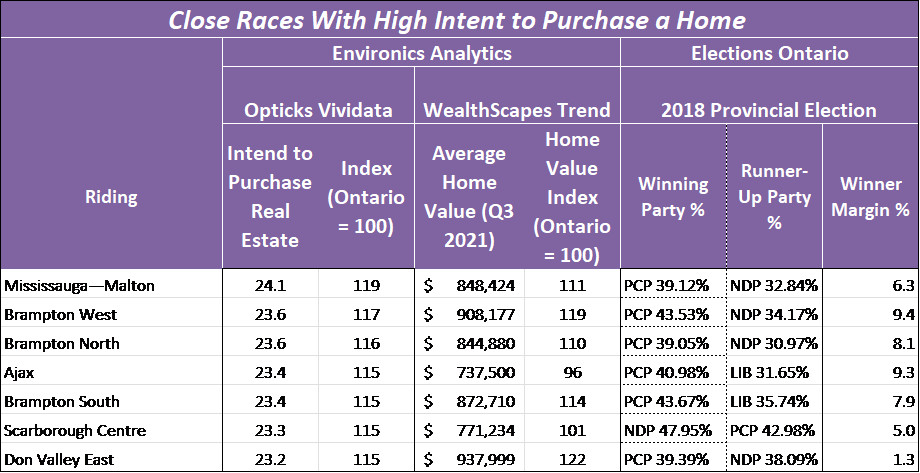 This chart shows the ridings with a high intent to purchase a home. (Environics Analytics)

Seoni identified six “close races” from the last provincial election in which voters had a high intent to purchase a home. The PCs won all but a single riding.

“If housing market proposals by the parties are received well, the one in four residents who say they intend to purchase might be up for the taking in these ridings,” he said.

All four major political parties have made big housing pledges, promising to build hundreds of thousands of new homes in the next 10 years if elected.

The Ontario New Democratic Party, on the other hand, appears to have a slight upper hand among renters, who are primarily made up of younger and newcomer voters.

“Rent control promises could help the NDP hang on to more votes in these segments,” Seoni said.

Both the Ontario NDP and Liberals have pledged to reintroduce rent control. Currently, annual rent increases are slightly regulated in Ontario to align with the Ontario Consumer Price Index; however this does not apply to newer buildings constructed after 2018 or in a scenario in which a unit is vacant. 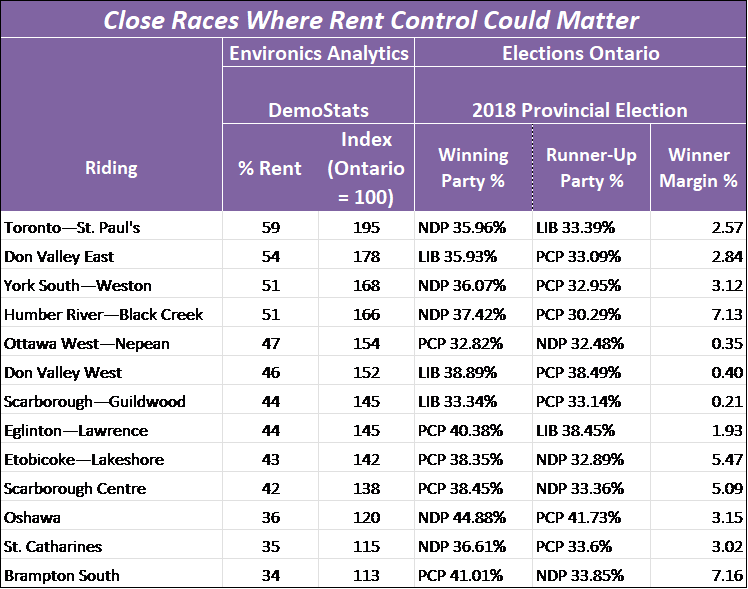 Of 13 close races from 2018—in which a riding was won by under 10 percentage points—Environics Analytics found that all but two were located in and around Toronto.

“Renters make up at least one third, and in a few cases, over half of households. So high rents will be on many of these residents’ minds,” Seoni said. “Five of these ridings went to the PCs with slim margins.”

Seoni adds that if renters can be mobilized, the PCs would be most vulnerable in Ottawa West-Nepean, Eglinton-Lawrence, Etobicoke-Lakeshore, Scarborough Centre and Brampton-South.