Hedley frontman Jacob Hoggard has been granted bail pending the outcome of an appeal into his June 2022 sexual assault conviction, in which he was sentenced to five years behind bars.

The decision from an Ontario Court of Appeal judge comes hours after the Canadian musician's sentencing.

At 2:30 p.m. Thursday, Hoggard's lawyer Megan Savard along with Crown Attorney Catherine Weiler, met with Justice Grant Huscroft to present their reasons why Hoggard should or should not be released from jail while the appeal is being heard.

After both sides made their submissions, Huscroft said he would notify lawyers once he had reached a decision. Late Thursday, the judge granted Hoggard’s bail application.

“In all of the circumstances, given that (Hoggard) poses no public safety or flight concerns and raises arguable grounds of appeal, I am satisfied that his detention is not necessary in the public interest,” Huscroft wrote in his decision.

The bail hearing was held just hours after Hoggard was sentenced to five years in prison after being found guilty of sexually assaulting an Ottawa woman in a Toronto hotel room six years ago.

Ontario Superior Court Justice Gillian Roberts delivered the sentence this morning, noting that she accepts the victim’s account in “its entirety.”

The Crown in the case had asked for a sentence of six to seven years while the defence requested that Hoggard only be kept behind bars for three to four years.

The defence argued that a psychiatric report indicated that the Hedley frontman was a low risk to reoffend and had a good chance at rehabilitation, while the Crown suggested that he was a danger to the public and needed to be kept in custody.

In arriving at her sentence, Roberts said she considered the trauma inflicted upon the victim, whose identity cannot be revealed due to a publication ban, both by the assault and the trial process as well as the continuing impacts the 2016 sexual assault have had on her life for Hoggard’s moments of “sexual gratification.”

“She’s a different person than she was when she went to meet Mr. Hoggard,” the judge said Thursday.

Roberts noted that Hoggard had no prior criminal record and provided 52 letters from individuals, attesting to his “good character.”

She said she also took into consideration that since news of Hoggard’s alleged sexual impropriety surfaced he’s been seen as a “recognizable pariah” resulting in him and his family being fearful of going out in public.

Further, Roberts said that the $2.8 million lawsuit filed by the victim on Oct. 6, the first day of the sentencing hearing, would “hang over” Hoggard and his family for a long time, “maybe even forever.”

Nonetheless, Roberts said that the sentence “must be proportionate to the gravity of the offending conduct.”

“It must be sufficient to reflect the inherent harmfulness of a manipulative and particularly degrading rape. … The full picture must be recognized and considered in sentencing,” she said, calling the assault “heinous” and noting that the victim feared for her life and was forced to endure several hours of violent sexual intercourse and degradation. Hoggard admitted in court that he did not use a condom.

Roberts also indicated that Hoggard, in a follow up conversation with the victim, attempted to “gaslight” her and wanted to create a “certain narrative.”

After asking Hoggard to stand up and receive his sentence, Roberts thanked the defense and crown attorneys for their “very effective and proficient” handling of this case then wished him “the best of luck.”

Hoggard then hugged and kissed his wife Rebekah Asselstine before being handcuffed and led out of the court room. 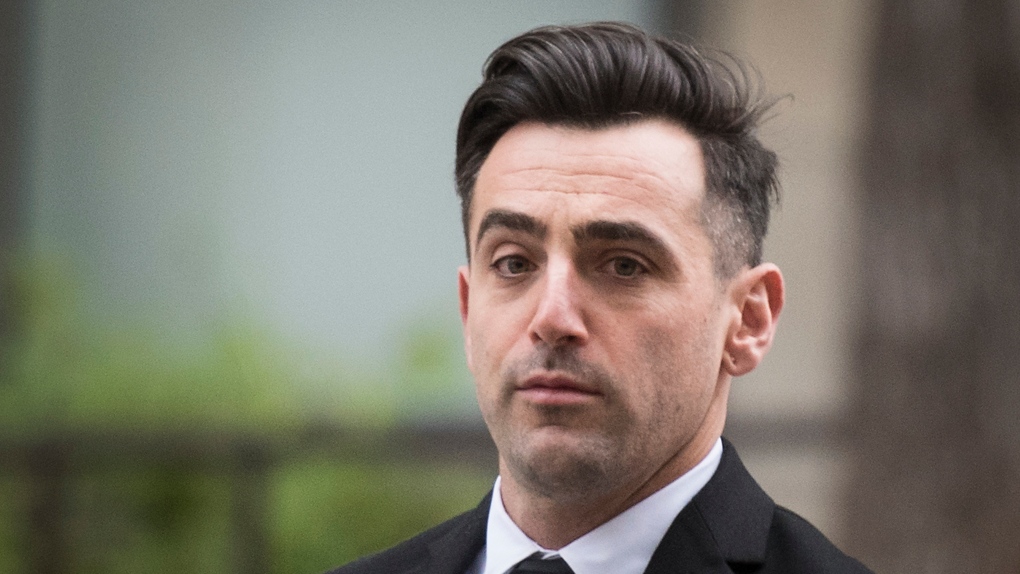 Canadian musician Jacob Hoggard arrives at the Toronto courthouse for sentencing after being found guilty earlier this year of sexually assaulting an Ottawa woman, on Thursday, October 20, 2022. THE CANADIAN PRESS/ Tijana Martin

Aside from sentencing Hoggard to five years of jail time, Roberts also ordered that he be issued a 10-year ban on possessing any weapons and be placed on the sex offender registry for the next 20 years.

Speaking to reporters outside the University Avenue Courthouse following the sentencing hearing, Crown Attorney Kelly Slate commended the jury for their “diligence in this matter," and Roberts for her “fairness.”

Slate also gave credit to the two “very brave” complainants for coming forward to the and speaking to police, and for testifying at both the preliminary hearing and trial for Hoggard.

Back in 2018, Hoggard was charged with two counts of sexual assault causing bodily harm and one count of sexual interference after allegedly violently and repeatedly raping two females, one of whom was a minor, in separate incidents in the fall of 2016. Prosecutors also alleged he also groped the girl after a Hedley concert in April 2016 when she was 15.

He pleaded not guilty to all three counts.

On June 5, Hoggard was found guilty of one count of sexual assault causing bodily harm in the case involving the adult woman, but was acquitted of the same charge in connection with his alleged involvement with a teenage fan.

At that time, he was also found not guilty of the sexual interference charge, which also pertained to interactions he allegedly had with the underage girl.

“This is no doubt a very difficult process, but it's a necessary one,” Slate said.

“Mr. Hoggard’s conviction and sentence sends a message to the community that sexual violence will not be tolerated by our community, by anyone.” 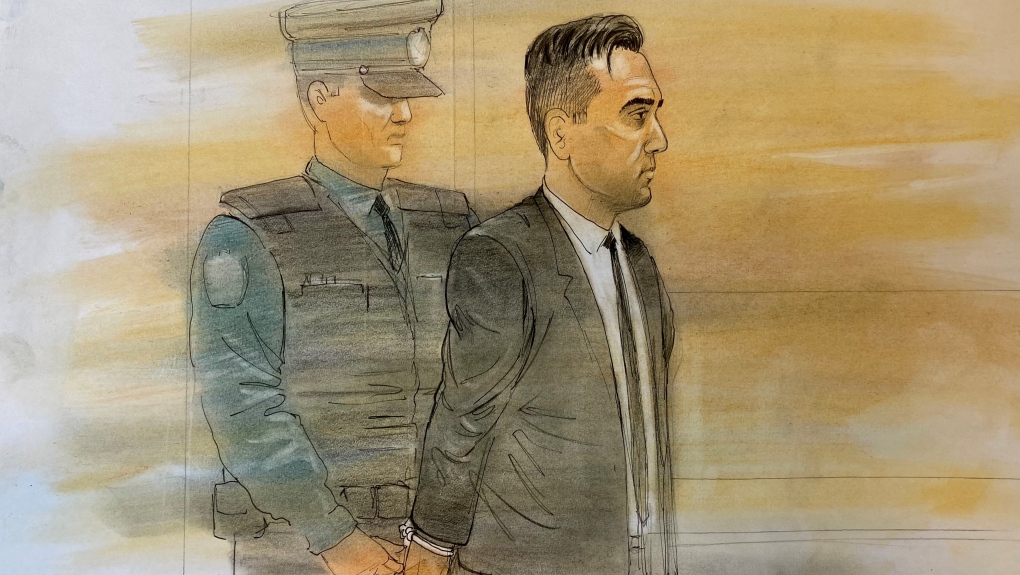 A sketch of Canadian musician Jacob Hoggard in handcuffs after he was sentenced to five years in prison on Oct 20, 2022 (John Mantha).

Last March, Hoggard, who was born and raised in B.C.’s Lower Mainland, was charged with sexual assault causing bodily harm in connection with another unrelated incident that reportedly occurred on June 25, 2016 in Kirkland Lake, Ont. He has denied the allegation and said through his lawyer that he intends to plead not guilty. A judicial pre-trial was held at a northeastern Ontario court on Oct. 17. Another appearance has been scheduled for Oct. 27.