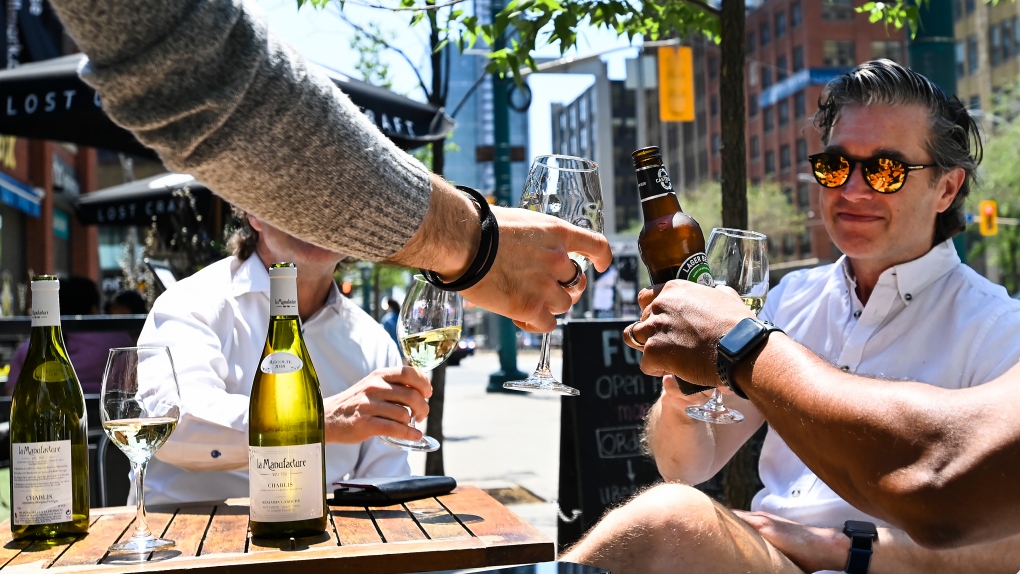 People enjoy drinks and friends on outdoor patios during the COVID-19 pandemic in downtown Toronto on Friday, June 11, 2021. THE CANADIAN PRESS/Nathan Denette

TORONTO -- This weekend, the sidewalks in Toronto are a little busier, the patios are full, and, as resident Lucie Malbeteau describes it, there’s a sense of “freedom” in the air.

As she sits in a Queen Street West cafe having brunch on Sunday, Malbeteau is experiencing the city for the first time, having moved here from France nine months ago.

She says the simple act of having brunch indoors feels both normal and wonderful at the same time.

The cafe, called Marvellous by Fred, is busy with a lot of walk-in traffic, and people wanting to sit down.

"It's just like something that we used to have, and now we just discover how good it is to have it back," store supervisor Melanie Ven Der Horst said.

Ontario entered Step 3 of its reopening plan on Friday, which once again allows for indoor dining and a host of other loosened public health restrictions. There’s no limit on the number of people per table, but restaurants must allow for social distancing between groups.

Outside Scotiabank Theatre, Davin Lengyel is about to go see the newest installment in the “Fast and Furious” franchise, “F9.”

Lengyel said he can't wait to share in the experience with other people in the audience.

"Movies are always a communal experience in the first place. That's what they're for," he said.

And as moviegoers trickle in on a hot July afternoon, Lengyel says watching movies and TV at home during the pandemic just can't compete with the theatre.

"It’s the large screen," he says. "It's the experience of seeing it with a group of other people you can hear them appreciate it, you can hear the ‘oohs’ and the ‘awes.’"

At an F45 gym in Etobicoke, owner Adam Meghji was cleaning up, after a weekend of nearly full classes.

He says the feeling inside was “jovial."

"The mood is just so excited. I think people are not only excited to come back into the studio to work out but also just to see other people,” Meghji explained.

After being closed for nearly nine months, gym staff said they were prepared to reopen and pick up where they left off.

"I feel like there's more optimism this time around the reopening that we're going to stay open," Meghji said.

A little more freedom, a little more optimism, and a lot of hope that there will be no looking back.