Del Duca won the leadership race on the first ballot, securing 59 per cent of the party’s support. Instead of congratulating the new leader, the Progressive Conservative party led by Ontario Premier Doug Ford took to Twitter to say that the province “can’t afford a Del Duca-Wynne.”

Here's a reminder of the Del Duca-Wynne legacy - the Liberals that brought you:
•Skyrocketing hydro rates
•Out of control debt and deficits
•300K manufacturing jobs lost pic.twitter.com/oMTj1wrH0Z

Water under the bridge? As Minister of Transportation under Kathleen Wynne, Steven Del Duca built a bridge UPSIDE DOWN. Ontario can't afford a Del Duca-Wynne. pic.twitter.com/z3bnKKCEMH

The social media posts make reference to the party’s former leader Kathleen Wynne, who lost the 2018 election to Doug Ford and resigned as the party’s frontrunner. Del Duca held positions as transportation and economic development minister during Wynne’s reign.

Speaking to reporters following his win, Del Duca said that the attacks did not come as a surprise.

“The attacks from the conservatives against me started back in December when they decided using taxpayer dollars, I think rather inappropriately, that they wanted to blame me for their very politically motivated decision to cancel for example the Hamilton LRT. We know that they attacks have been ongoing since that point in time.” 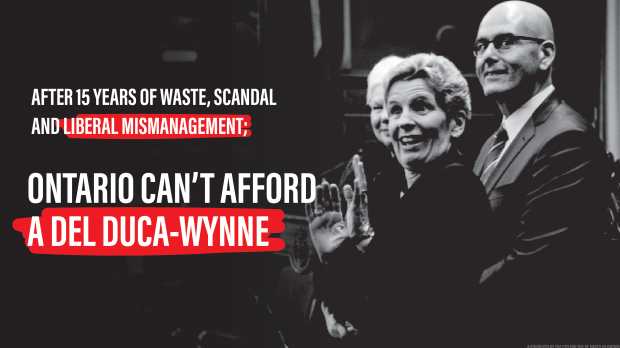 “There is a very clear reason why the attacks have already begun and they aren’t going to stop and that is because they are desperate. They are desperate because they know that the agenda they are pursing here in the province is reckless, it is incompetent, their polling numbers reflect that and that’s politics.”

The 47-year-old said that he has “broad shoulders” and can handle the attacks.

This is the only way we could fit 15 years of Liberal mismanagement onto one page. pic.twitter.com/6BVhuQWtor

The Progressive Conservative’s also issued a letter to supporters asking for donations to help “hold Del Duca and the Liberals accountable.”

“Following 15 disastrous years of Liberal waste, scandal and mismanagement, Ontario is back on the right track thanks to the leadership of Doug Ford and our PC government – and in just 18 short months, we’re already delivering on our promise to build a stronger, more prosperous province,” the letter reads. “But we need your help. Can we count on you to help us hold Del Duca and the Liberals accountable?”

Government House Leader Paul Calandra told reporters that he was unimpressed with Del Duca’s talking points and said that e was “doubling down on the policies of Kathleen Wynne.”

“It’s like he learned nothing from the 2018 election,” he said. “The Wynne-Del Duca government is not something the people of Ontario look back on fondly.”

“They had an opportunity here to move forward, they chose to go back.”

While Green Party Leader Mike Schreiner took a moment to congratulate Del Duca, but he also questioned his ties to the previous Wynne government.

"I am not sure that someone associated with the old guard of Liberal establishment and embroiled in past controversies can deliver the leadership that Ontario needs,” he said.

The Ontario New Democratic Party has yet to issue a statement about the election, but party leader Andrea Horwath took to Twitter to congratulate the newly-elected Del Duca.

“See you on the campaign trail,” she wrote.

The Ontario Liberals hold only eight seats in the legislature. Del Duca lost his Vaughan seat during the 2018 election.