TORONTO -- Wynne-era cabinet minister and former MPP Steven Del Duca has won the leadership of the Ontario Liberal Party on the first ballot, securing 59 per cent of support.

The 47-year-old lost his Vaughan seat in the 2018 general election, when the Ontario Liberals were reduced to seven seats in the 122 seat legislature.

“There are very few things in my life that can make me speechless, but this is one of those things,” the former aide to Greg Sorbara told a crowd at Mississauga’s International Centre after winning.

He thanked his family and then a raft of people in his own campaign along with the other five candidates, saying they were “just about the best field of candidates I could imagine for our party and for our province at this moment.”

One of his top aides, Omar Khan, told CP24 that Del Duca would begin a tour of the province “as soon as Monday,” echoing what he said throughout the leadership race about the need for a serious effort at rebuilding trust with voters after the party’s drubbing two years ago.

“What will create is a modernized political movement that will hit the ground running and that will deliver progress for the people of Ontario,” Del Duca told the crowd. 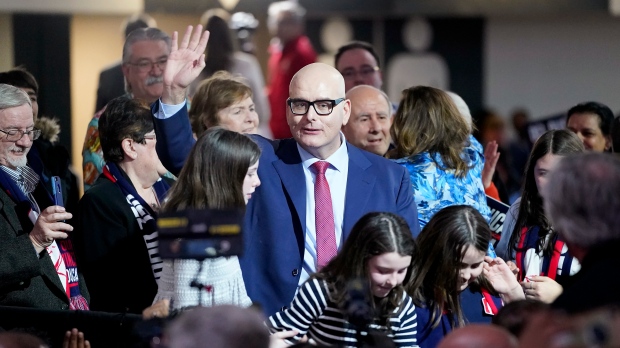 “I want to congratulate Steven Del Duca on his election as our next leader,” Coteau said after the result was announced. “He ran an excellent campaign based on hard work and dedication to our party.”

The opposition parties were quick to comment on the party’s choice for leader, with the Ontario PCs tweeting “Ontario can’t afford a Del Duca-Wynne.

“See you on the campaign trail,” she wrote on Twitter.

See you on the campaign trail.

"I am not sure that someone associated with the old guard of Liberal establishment and embroiled in past controversies can deliver the leadership that Ontario needs.”

Del Duca said the PCs pounced on him immediately today because they’re “desperate.”

“They’re desperate because they know that the agenda they are pursuing in this province is reckless, it’s incompetent their polling numbers reflect that, but that’s politics.”

Speaking as the Tories’ observer at the convention, PC MPP Paul Calandra questioned why Del Duca wouldn’t immediately seek a seat in the legislature.

“He was a cabinet minister for a number of years with Kathleen Wynne, there was a question related to a GO train station he didn’t listen to his public service and tried to move it into his riding, and then how possibly could he not know that he couldn’t build a swimming pool that backs onto a conservation area,” Calandra said.

Del Duca refused to speak about the swimming pool story when asked Saturday.

“I think at the end of the day it’s about the team, the values and the hard work,” he said.

Speaking to the party faithful earlier in the morning, Del Duca suggested a resurgent Liberal party would do well to focus on the fundamentals like healthcare and education, but jettison the deficit hawkishness of the current Ford government.

“If you are seriously ill and your entire world shrinks down to the size of the hospital bed, in that moment when you’re waiting to see your doctor, I don’t believe you’re obsessing about the size of the provincial deficit," he said. "I believe you just want to get better.” 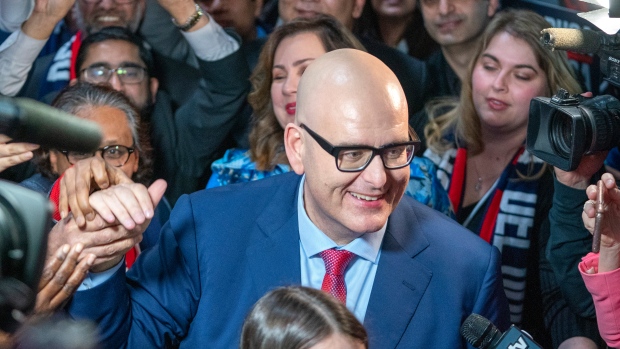 The former transportation and economic development minister under Kathleen Wynne gains the reins of a party in significant debt, with less than 40,000 members, a number dwarfed several times over by the Tories.

MP Yvan Baker, a former MPP working to organize the convention, told CP24 the fact that Del Duca will not have a seat should he win is a double-edged sword.

“We’ve seen in other parties and in the Liberal party situation where a new leader is elected and doesn’t immediately have a seat,” he said. “The new leader will have to make a decision about at what point he seeks a seat, depending on when that opportunity presents itself but it will also give him a chance to travel the province and reach out to different parts of the province and hear from folks what their priorities are.”

Del Duca told reporters Saturday that he would not immediately seek a seat in the legislature, joking that he only would do so quickly if a spot opened up in his home riding of Vaughan—Woodbridge.

“What happens at Queen’s Park is very, very important but people face extreme challenges in their everyday lives,” he said, reiterating his plan for a tour of Ontario in the coming weeks.

He said that should he secure a victory in 2022, he would work to reverse the Ford government’s cuts to OSAP, return public schools to their status before 2018 and re-enact a raft of climate change measures including some sort of carbon pricing, electric vehicle purchase incentives and tree-planting.

“We got a little away from the Liberal roots that we normally follow along,” delegate Don Matheson, who is supported Del Duca, told CP24 before the results were announced.

He agreed they need to embark on a humble tour trying to regain voters’ trust and repair the frustration that boiled over in 2018.

“The Liberal Party wasn’t listening to what the needs of the people of Ontario were,” he said.