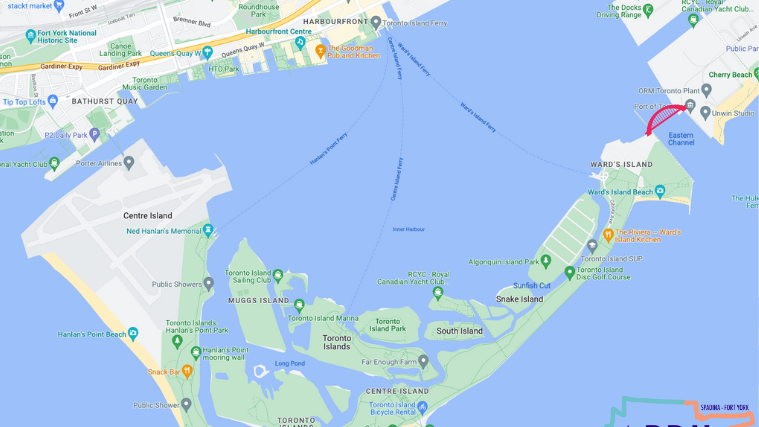 April Engelberg, a candidate for city councillor, has proposed a bridge that would connect Toronto's Port Lands to the Islands. (Image provided by Engelberg)

A candidate for city council wants to build a lift bridge that would connect Toronto’s Port Lands to the Islands.

The proposal came from April Engelberg, a candidate for Spadina-Fort York.

“I’ve been talking to a lot of people while working on the campaign and what I’ve noticed is people’s top priority is park access,” she told CTV News Toronto over the phone.

“Given that the Rail Deck Park is not happening the way we initially envisioned because the city doesn’t own the air rights and given that Ontario Place is getting redeveloped in a way that favours the private sector…this is an opportunity for Toronto to make available its massive, largest public park to all Torontonians for free.”

The idea would be to build a 250-metre bridge for pedestrian and cyclist use connecting Ward’s Island to the Port Lands.

I am advocating for a pedestrian cycling lift bridge to the Toronto Islands! All Torontonians deserve to access our ward’s largest public park for free.

It's practical. It's possible. It's a priority.

Engelberg says a pedestrian could walk the bridge in a minute or two while a cyclist could get across in under that time.

The bridge would also have the capacity to lift and allow large shipping or cargo vessels to pass through the area.

Engelberg says she’s done a lot of research to ensure the proposal is possible and estimates the infrastructure could cost between $10 million and $15 million depending on which level of governments pitch in.

As it stands now, residents wanting to visit the Islands have to take a ferry across Lake Ontario at a cost of about $9 for an adult return trip.

“Our ferry system is old, expensive and slow,” Engelberg said while adding that Torontonians should be able to access the Islands for free.

“It’s about making the most equitable use of the green space that city actually owns.”

Toronto's municipal elections are scheduled to be held on Oct. 24.