Cannabis and exercise go hand-in-hand for some fitness buffs 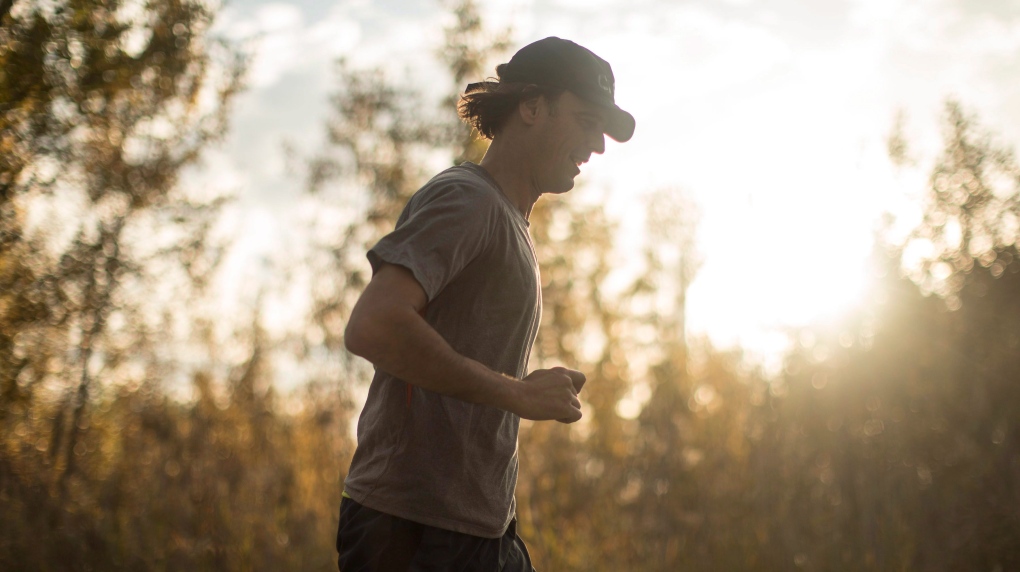 Marathon runner Adrian Landini is pictured in Tommy Thompson Park in Toronto on Wednesday, October 10, 2018. As an avid runner with some two dozen marathons under his belt, Landini is thoroughly familiar with the runner's high. He's also quite experienced running while high. THE CANADIAN PRESS/Chris Young

TORONTO -- As an avid runner with some two dozen marathons under his belt, Adrian Landini is thoroughly familiar with the runner's high. He's also quite experienced running while high.

Yes, the longtime pot smoker says he routinely lights up during a run, and sometimes before -- a recent habit that he says has become inextricably linked to his endurance training.

"I just kind of zen out, I pay attention to my movements and what's around me and whatnot and just bring it in with good form," the 43-year-old Toronto resident says of why he smokes.

"It helps with the sense of awareness, and of course that could be bad if you're not able to deal with any type of pain. Your toes usually hurt or your feet or whatever and (that's bad) if you can't lock that out but I never have a problem with that. I don't really quit my runs."

The notion of using marijuana while exercising -- especially smoking it -- would seem to fly in the face of what a workout is all about, Landini acknowledges.

Conventional thinking is that pot slows down reflexes and motor skills, and is far more likely to inspire couch-bound munchies than a drive to compete.

You'd also be hard-pressed to find an expert who doesn't caution against combining recreational drugs and exercise.

But Landini says he only uses enough to help him relax and focus on the task at hand.

He typically smokes mid-run while training and will reserve his stash for the 30-kilometre mark on race day. Still, he admits to tackling a handful of full marathons high, including the Hamilton marathon last year.

"I got there really early and checked my bags (and) there was no one around so I just light up, puff up and just try and relax," recalls Landini, now preparing for the next Hamilton run Nov. 4, as well as the Toronto marathon two weeks earlier Oct. 21.

"Because that's a big part of it, too -- you've just got to be a relaxed runner. If you're expending unnecessary energy you'll fail or you just won't have a good run. A system like that works for me."

Impending legalization Wednesday is lifting the veil around the unexpected ways weed has long been integrated into some users' lives.

Among those are the fitness buffs who are keen to dispel the stereotype of the lazy stoner, with amateur athletes, health-and-wellness gurus, and marketing experts touting the potential of cannabis-fuelled workouts that go well beyond ganja yoga.

Vancouver-based advocate Bethany Rae says she will use cannabis before a long bike trip to help her focus, and applies topicals after a tough course to ease any resulting aches and pains.

The founder and CEO of the female-focused lifestyle brand Flower & Freedom describes cannabis in therapeutic terms, and says she prefers it to more traditional painkillers for menstrual cramps or muscle pain.

Rae steers clear of products high in tetrahydrocannabinol, or THC, which is the property that causes most of marijuana's psychoactive effects.

"Occasionally I might lightly use a vape pen and take one or two draws on that," she says, noting that's more likely to occur while running and practising yoga where "the mind/body connection can be enhanced with some cannabis."

But mostly, she applies lotions high in cannabidiol, or CBD, on joints before and after a workout to stave off soreness, pointing to its anti-inflammatory properties.

Rae says cannabis-fuelled workouts and recovery are more common than most would think, and can unfold in a wide variety of ways.

"I have a low tolerance so I'm consuming a very small amount of THC when I'm microdosing but for someone else they might not feel that at all, or for someone else it might be too much.... You really need to become an educated consumer and not just pick a product randomly or just take what someone is recommending because it's a very personal (choice). Each has a different biochemistry and cannabis is quite complex."

Dr. Jason Busse, co-director of the Centre for Medicinal Cannabis Research at McMaster University in Hamilton, cautions that driver simulation labs have showed recreational marijuana use results in decreased reaction time, hand-eye co-ordination, and perception -- none of which would aid any sport that requires rapid decisions or complex hand-eye co-ordination.

"We also know that soon after you consume cannabis, it will result in some increased heart rate, some increase in blood pressure and even something called orthostatic hypotension, which means it can result in dizzyness, light-headedness," he says. "If you were doing something involving heavy weights you could imagine that might not be particularly helpful."

Busse adds that he's only familiar with studies that looked at cannabis and exercise involving high doses of THC, and they date back decades. Studies involving actual athletes employing the more measured approach outlined by Landini and Rae are largely unavailable, he says.

In the meantime, many users appear to be experimenting on themselves, he notes.

"I think people are really engaging in a balancing act where they're taking just enough that it reduces some of that stress and anxiety but not so much that it actually gets them into a sedation and limits their co-ordination. You could imagine it would be a very challenging thing to try to recommend as a general strategy," he says.

There does seem to be evidence that CBD-infused topicals have analgesic and anti-inflammatory properties and may help accelerate recovery when applied directly to a sore joint, he allows.

But those studies involved indirect populations, such as multiple sclerosis patients seeking treatment for muscle spasms, or arthritis-related pain in animal models, he adds.

"It's a bit of a stretch to take evidence from those kinds of studies and then apply it to individuals that are dealing with delayed onset muscle stiffness or soreness."

Dr. Ira Price, whose Hamilton clinic Synergy Health Services is dedicated to evaluating patients for the use of medical cannabis, says CBD-infused products are well-used in the field of mixed martial arts as a post-fight recovery aid that can ease reliance on narcotics.

And he says low doses of THC, too, can be helpful during some workouts by alleviating pain, citing evidence of recent studies.

"It actually interacts quite well with different receptors in our body that may help us with things like attention, and help us with focus during exercise in low doses," adds Price, who specializes in sports medicine and cautions anyone considering cannabis for their workout to consult a professional first.

"The most important thing you can remember regarding dosing is starting low and going slow. It also depends on what method of use you are using. You don't want to ingest a lot of cannabis and if you're vaporizing it's a lot easier to titrate. What I don't recommend are things like smoking or combustions because that's not healthy at all."

Nonetheless, Landini says he prefers to smoke his marijuana. He's tried edibles but found their effects too unpredictable.

The challenge of smoking, he notes, becomes finding a spot to light up during a race. Often, he'll run into a portable toilet when he needs a puff.

"I've just blasted off in there and then joined the rest of the crew on the course," says Landini. "You might get some weird looks when you leave. People are like, 'That doesn't smell like an outhouse!"'