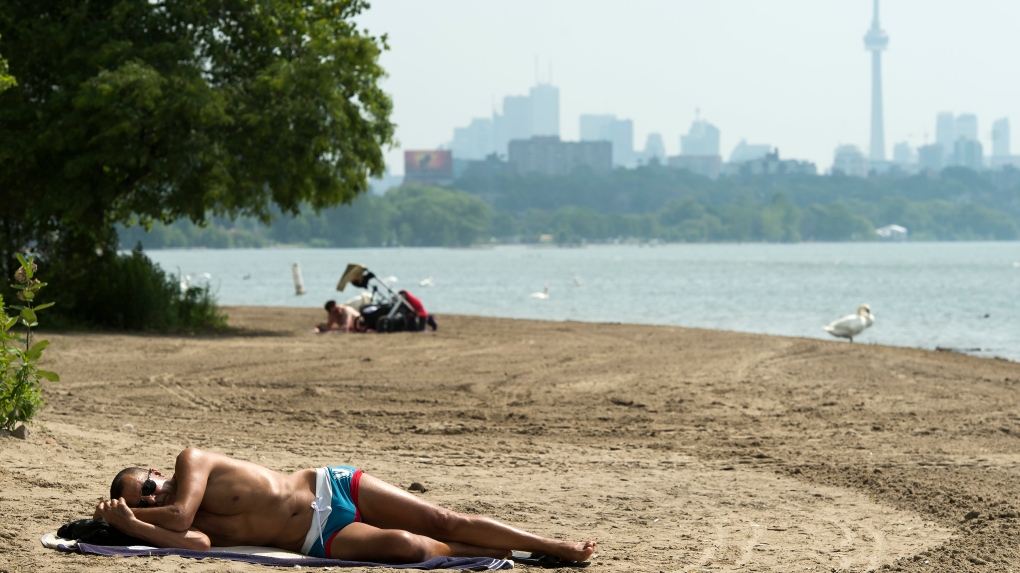 A man sleeps on the sandy beach along Lake Ontario in the extreme heat in Toronto on Friday, July 19, 2019. THE CANADIAN PRESS/Nathan Denette

Advocates are sounding the alarm on the city’s current approach to extreme heat, saying the framework does little for Toronto's homeless community, as the city sees its third straight day of hot temperatures and high humidity.

The Heat Relief Network Strategy, first implemented in 2019, is the city’s current approach to extreme heat, aiming to reduce heat-related illness and death during heatwaves. Within the network, residents are directed to one of approximately 300 locations across Toronto marked as ‘designated cool spaces.’ These include libraries, civic centres, indoor and outdoor pools, splash pads and malls, among others.

Prior to this plan, the city opened and operated just over a dozen cooling centres when heat warnings were issued.

While there are more 'designated cooling spaces' in the Heat Relief Network than there ever were cooling centres, the centres were better equipped with resources and healthcare needed to attend to those suffering from extreme heat, advocates say.

“We've lost dedicated spaces, and instead, are relying on existing infrastructure like libraries and community centres to function as de facto ‘cool spaces,’ but [there are no] additional resources for them to do this, including the resources needed to extend hours on days like Sunday when most libraries are closed,” Chan McNally said.

This past Sunday, when temperatures hit the mid-thirties and humidex levels sat at 41 C, many community centres and libraries listed as designated cooling spaces were closed, as per their regularly scheduled hours of operation.

When reached for comment, the City of Toronto did not provide a statement on whether all designated cool spaces should be open on Sundays when heat warnings are in place.

A spokesperson for the city provided a statement to CTV News Toronto that said, in the face of climate change, the city approach to managing hot weather responses has “evolved based on evidence demonstrating that heat is growing in intensity and heat waves are more frequent and more prolonged due to climate change.”

They say a small number of temporary cooling centres have been shown insufficient at minimizing heat-related health risks.

The Heat Relief Strategy “allows for greater access to [cooling] locations across the city” and provides relief “though familiar, public locations where vulnerable people are located, including the elderly and disabled,” they said

The city also said street teams are activated when heat warnings are issued to do wellness outreach to those living outdoors.

Rafi Aaron, spokesperson for Toronto’s Interfaith Coalition to Fight Homelessness, told CTV News Toronto that, despite the increase in the number of cooling locations, the locations are not always friendly to homeless populations.

“[The city is] sending clients to places where they are not welcome ... or that are not near to where they are,” Aaron said in an interview Monday.

He said a client recently heeded the city’s advice and went to a splash park in an effort to cool down, where he says other residents called the authorities upon his arrival.

McNally says private spaces, like malls, may also be “unwelcoming to unhoused and low-income people.”

“They also do not have health care on-site to address heat-related illness, or food or drinks,” she said.

She notes the city’s interactive map poses a challenge to some homeless individuals as well.

“This just isn't accessible to people who can't use or don't have smartphones or access to WiFi or data,” she said.

Chan McNally says that having cooling centres in existing community infrastructure is not an inherent problem “so long as they are funded to extend hours and bring health care, food and drink on-site.”

“Climate change is only going to exacerbate inequality unless we design a Heat Relief Network that prioritizes those most vulnerable to heat,” she said.

Aaron agrees with both the city’s and Chan McNally’s sentiments that responses to extreme weather need to adapt with the ever-evolving climate crisis, but says the city is “abdicating moral and ethical responsibility” by pointing people to locations without enough resources.

Instead, Aaron says he wants to see the city move towards dedicated emergency weather centres, open all-year round and equipped with adequate resources.

In the meantime, he’s spending his time passing out water bottles – flats of them – to the city’s homeless community in an effort to help people endure the heat.

“We simply cannot keep up with the demand for water,” he said. “People can’t exist like this. They need somewhere to go.”

In an effort to help alleviate the heat for residents, the City of Toronto also extended the hours of seven public pools until 11:45 p.m. on Saturday and Sunday as part of its response to the warnings.