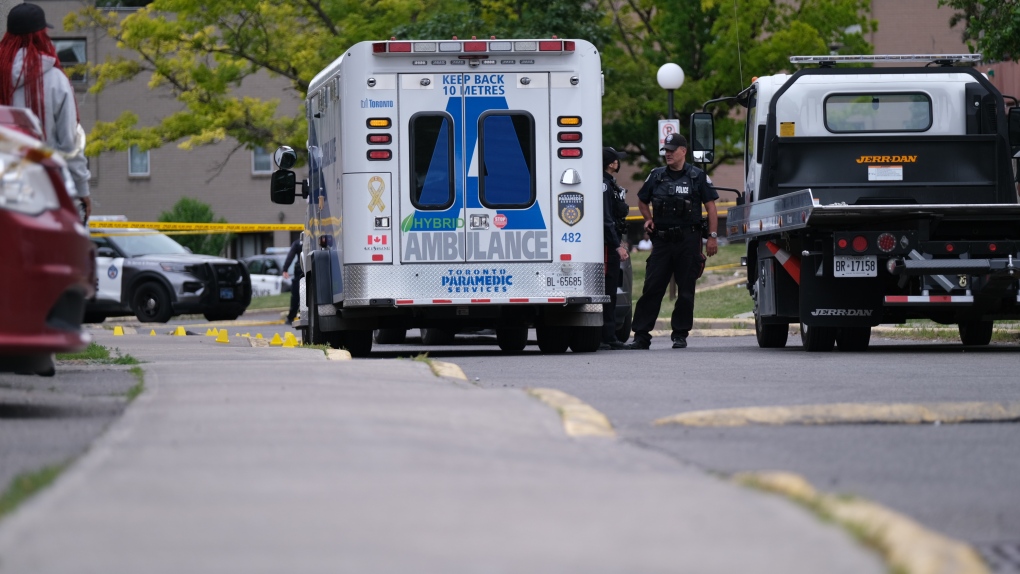 Police are on the scene of a shooting on Lotherton Pathway, in the Caledonia Road and Lawrence Avenue West area, on Sunday, June 19, 2022. (Simon Sheehan/CP24)

Two men have been arrested in Montreal in connection with a fatal shooting in North York on Father's Day.

It happened on the afternoon of June 19 in the area of Lotherton Pathway and Caledonia Road, south of Lawrence Avenue West.

When police and paramedics arrived, they located a 24-year-old Jaron Williams with no vital signs suffering from gunshot wounds.

He was later pronounced dead at the scene.

They appeared in court virtually on Sunday and were remanded into custody.

Police previously said that four suspects were seen fleeing the scene in a vehicle described as a 2010-2015 beige or champagne-coloured Chevrolet Equinox shortly after the shooting.

Police were also looking at whether the incident is linked to another shooting a few kilometres away in the area of Amaranth Court and Flemington Road that occurred minutes before that left a 43-year-old man seriously injured.

It was a violent Father's Day in Toronto this year, with four separate shootings, including the two in North York, that left one person dead and seven others injured.