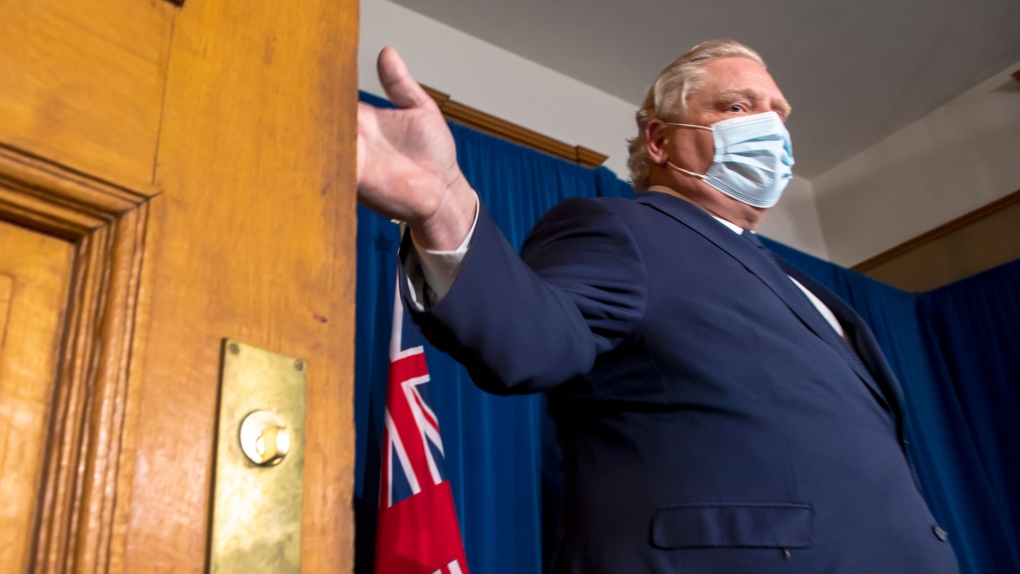 Ontario Premier Doug Ford arrives to make an announcement during the daily briefing at Queen's Park in Toronto on Thursday April 1, 2021. THE CANADIAN PRESS/Frank Gunn

TORONTO -- Ontario Premier Doug Ford said in the strongest terms yet Thursday that the province will not create a vaccine passport that would allow people to signal to businesses and other organizations that they have been vaccinated.

“The answer is no, we're not gonna do it. We're not gonna have a split society,” Ford told reporters in response to a question about creating vaccine passports Thursday at the first press conference he has held in some time.

“I just, no. We aren’t doing it. It’s as simple as that. We’re just gonna move forward,” Ford said. “Now if it's federal – getting across the border – that's up to the federal government. We'll see what they decide to do.”

Toronto Mayor John Tory has called for such a system to be developed, as has the Toronto Region Board of Trade.

TRBT CEO Jan De Silva told CP24 earlier this week that it would be a way for businesses to help ensure that they are able to stay open after having been shut down and/ or severely restricted for nearly a year and a half.

Some post-secondary institutions have already said that students will need to be fully vaccinated in order to return to campus in-person. Quebec has also said that it plans to use some sort of proof of vaccination to limit access to nonessential services if that province’s COVID-19 situation worsens in the fall.

However Ford said Thursday that he doesn’t plan on telling businesses who they should and should not serve and pointed out that Ontario’s Chief Medical Officer of Health Dr. Kieran Moore has said that he is not in favour of such a system either.

The premier also ruled out the possibility of making vaccinations mandatory, including for health care workers.

“No, hard no,” he said when asked whether he would consider the move.

He pointed to Ontario’s relatively high vaccine uptake, with close to 80 per cent of the population having received at least one dose, and said the province will continue to encourage every resident to get vaccinated.

“Folks just please go get vaccinated, that's all I can ask.”

Figures released by the province Thursday show that 79.6 per cent of adults 18+ have had at least one vaccine dose while 59. 5 per cent are fully vaccinated.