'We’re all going through our personal hell,' demonstrators gather in Toronto to support Ukraine

'We’re all going through our personal hell,' demonstrators gather in Toronto to support Ukraine

As tens of thousands of people flee Ukraine in the wake of a Russian invasion, a group of people in Toronto rallied outside of the U.S. consulate calling for more support.

A march is scheduled for Sunday at Dundas Square in downtown Toronto, but one of the co-organizers said that a group of about 100 people decided to gather a day earlier because “tomorrow may be late.”

“We need Canadians to see what is happening,” Svitlana Nechyporenko, the co-founder of Second Front: Toronto, told CP24. “We need to attract attention. We need people watching the news.”

“We’re all going through our personal hell right now. None of us have slept since Wednesday.”

In the early morning on Thursday, Russian President Vladimir Putin launched a military operation, sending troops towards Ukraine’s capital. According to U.S. officials, more than 250 missiles have been launched at Ukrainian targets.

As of Saturday, nearly 120,000 people have fled Ukraine into Poland and other neighbouring countries in an attempt to escape the invasion.

Canada, along with the United States and other European allies, have issued numerous financial sanctions over the invasion. The U.S. has also announced a $350-million package of additional military assistance.

Speaking on Saturday, Nechyporenko said the rally is meant to spread awareness of what is happening and encourage governments to get more involved.

Nechyporenko went on to say that people are sleeping in rotations so that someone is constantly monitoring social media and news reports from the region—so that if there is a significant development someone is available to reach out to family members and tell them to run.

“We are barely standing,” she said. “Many of us have not eaten because we just don’t have time for that.”

Many of the people gathered outside of the consulate brought with them stories of family or friends that are in danger.

“My friend just called me they don't have food. Its explosions everywhere. They live in fear,” Iryna Salamay told CTV News Toronto.

Julia Zaritsky, another organizer of the event, said that she hasn’t heard from her brother in almost a day. He lives in Kyiv.

At the rally, Zaritsky could be seen with her hand raised in the air--covered in red paint she says represents the blood already spilled during the invasion. 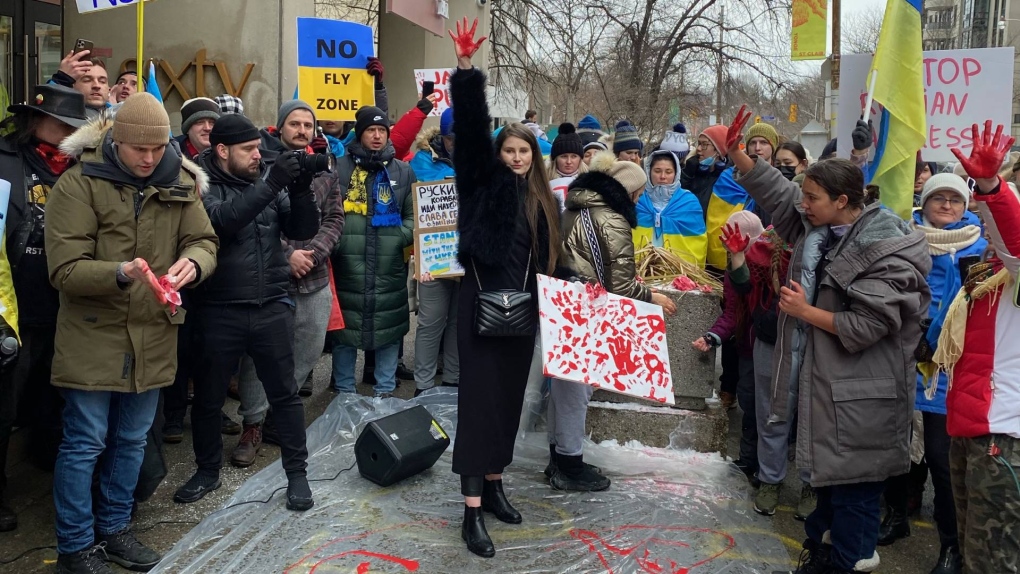 Toronto residents gather outside of the U.S. consulate in the downtown core on Feb. 26, 2022. (Sean Leathong/CTV News Toronto)

Later in the afternoon the group, waving the flag of Ukraine and holding signs that said “stop war” and “impose no-fly zone,” travelled to the Russian consulate on St. Clair Avenue. There they sang songs and chanted in solidarity with the people in Ukraine.

Toronto residents with family members overseas told CP24 their relatives are either fleeing to Poland or preparing to join the fight.

“It’s been hard. They’ve been trying for 12 hours,” one rally participant said of his family trying to cross the border, adding they are travelling with a two-year-old and six-year-old child.

“My brother is a minor so he’s going to go to Germany to old friends, wait for a better time there,” another man said.