While enforcement and funding are important, Toronto Police Chief Mark Saunders says, an understanding of residents’ day-to-day lives in communities rocked by gun violence is crucial.

In a sit-down interview with CTV News Toronto on Wednesday afternoon, shortly after announcing an 11-week program to help reduce a recent spike in shootings, Saunders stressed that enforcement alone will not help prevent these troubling incidents that have occurred over the past few months throughout the city

Police have recorded 267 shooting incidents this year as of Aug. 11, with 401 victims.

During the interview, Saunders reflected on his years working in the homicide unit, saying that an investigation into a murder led detectives to a network of mothers who had banded together to make sure their children were safe after each time gunfire was heard in their neighbourhood.

“When I was working in homicide, I had a case where there was a young man that was killed,” he said. “A mother showed up and said ‘That’s my son.’ We were trying to figure out how she knew that.”

At the time, Saunders said that he learned there was a group of 10 mothers who would call each other and check on their sons every time there were shots fired close to home.

“When she got the call she went to check and her son wasn’t there and low and behold she dropped the phone and came out and that’s how she knew,” he said.

“Where mothers are trying to figure out what do they need to do to make sure their kids are safe … where mothers will put a mattress in their bathtub to have their kids sleep in it so that if there are gunshots that night they can get a full night sleep.”

When asked if he believes these networks and practices are still in place now, he said “of course.” 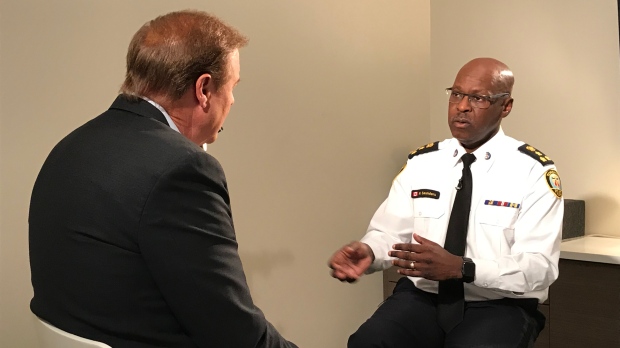 The program launched by Saunders on Wednesday—dubbed Project Community Space—is a result of an additional $4.5 million in funding that was promised jointly by all three levels of government earlier in the week. He said that the money will be used to bring additional resources to at-risk neighbourhoods and will be based on intelligence-gathering efforts.

The funding was announced amid a string of summer shootings in Toronto. Over the August long weekend, 17 people were injured in 14 separate shootings in the city.

Saunders said numerous factors are involved with reducing the number of shootings in Toronto, noting there has to be equal resources provided to each affected area.

“That is where it gets a little complicated,” he said.

The first “basket,” as he describes it, is to act proactively and help prevent youth from getting involved in gangs and from picking up a gun in the first place. Saunders stressed the importance of having core funding for programs in the community, as grants have to be reapplied for every few years and do not provide a concrete or permanent feeling of support.

“A lot of things in play are grant-funded,” Saunders said.

Following prevention, Saunders said that law enforcement is next - investing and solving crimes and bringing suspects into the court system.

The third piece occurs following incarceration and includes a “multi-pronged approach” for people who have been charged with firearm-related offences and who are either out on bail or have been released from prison.

“There should be a deterrent,” Saunders said. 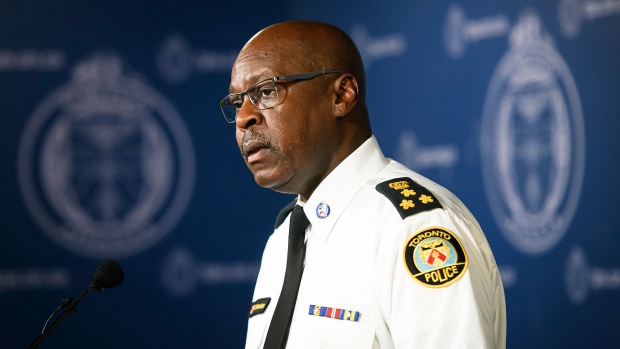 Last week, Saunders said that about 326 people who have been charged with firearm-related offences were out on bail in Toronto.

He told reporters at the time that he hoped to establish a stronger relationship with the court to allow for a better understanding about the impact gun violence has within Toronto communities.

On Wednesday, Saunders told CTV News Toronto that the city has a “large street gang population,” but also said that he does believe people who have been released from jail can, and should, rejoin their communities.

“That’s what is supposed to happen. Those are the laws that we have all agreed makes Canada, Canada,” he said. “There are so many people who have gone through this circle and, sometimes more than once, who have moved on.”

Saunders also said that the Toronto Police Service “needs a lot of partners if we are going to get this right.” It starts, he said, by building relationships with at-risk communities.

“With most of our cases, we know who the shooter is, and if we know, that means the community knows,” he said. “There are guns in bedrooms right across certain communities and the communities know better than us.”

The police chief said that he believes this is the first year where people are starting to grasp that dealing with gun violence isn’t solely about law enforcement.

In numerous round tables, he said he has heard that too much policing is not the answer, but at the same time investigators need to do their job and arrest people who are using guns.