A Toronto family’s vast display of front lawn Christmas decorations was literally cut short early Monday morning after someone appeared to slash a number of the holiday-themed inflatables.

Diana Goldie told CTV News Toronto that for more than a decade their home’s festive arrangement had become a holiday favourite for neighbours.

“We’ve set it up so that people can come and take pictures of their kids,” Goldie said. “It’s really nice and we love when people say, ‘Oh, we love your decorations.”

The collection of inflatable decorations includes a 12-foot singing Christmas tree, Santa playing hockey with a beaver, Minions going down a chimney, and a number of others.

Goldie said her 18-year-old daughter spent a day-and-a-half working to put the display together last week. 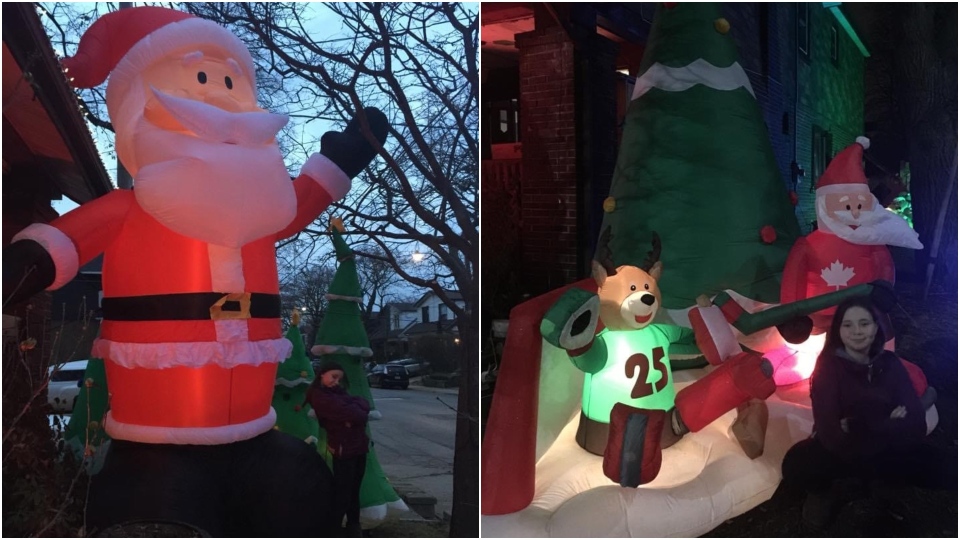 But between 1:15 and 1:20 a.m. Monday, Goldie explained that one of Santa’s inflatable hands began to deflate. It was captured on surveillance video from a camera on the front porch.

Goldie said she would later discover that someone had come onto her property and destroyed the entire display, which she said is worth hundreds of dollars.

Even with duct tape, Goldie said it appears the decorations are not salvageable.

To make matters worse, Goldie said that she’s unable to replace the inflatables due to the cost.

“We are heartbroken,” Goldie said. “We’re really disappointed, we can’t believe someone would do this.”