TORONTO -- Police are looking for the driver of a vehicle that was allegedly involved in a hit-and-run incident that seriously injured a mother, a grandmother and their toddler in Scarborough Sunday.

Emergency crews were called to the area of Pharmacy Avenue and Ellesmere Road around 11 a.m. after receiving reports of three pedestrians that had been struck at the intersection. 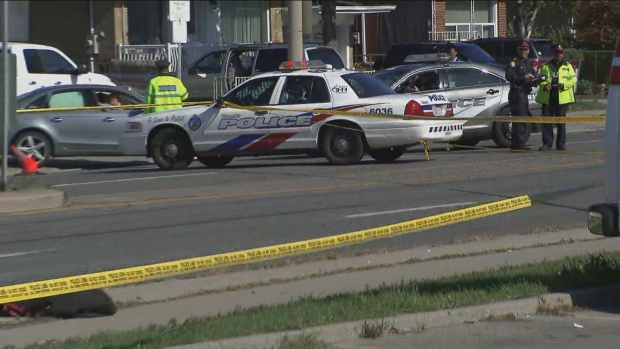 The vehicle drove past a few stopped vehicles, according to police, and failed to stop at a red light at the intersection.

In surveillance video obtained by CTV News Toronto, the vehicle can be seen mounting the sidewalk, where a 57-year-old woman and a 37-year-old woman were standing with a 20-month baby boy in a stroller. All three people were struck and suffered serious injuries.

The two woman are now in stable condition, and the baby is expected to recover. 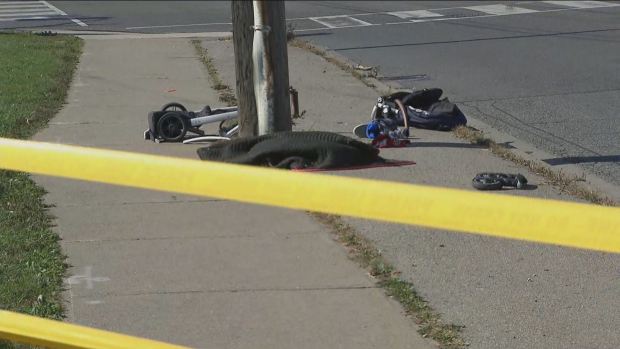 The vehicle later stopped on the sidewalk just east of where the pedestrians were hit, police said. Investigators believe two occupants exited the vehicle, walked around and assessed the scene.

Police said one person got back into the vehicle and fled the scene southbound on Pharmacy Avenue and the other person fled on foot.

The vehicle, involved in the crash, was located in a parking lot in the St. Clair Avenue East and O'Connor Drive area Monday following a tip from the public, police said.

A warrant has been issued for 34-year-old Derek DeSousa, who investigators identify as the driver of the motor vehicle. His whereabouts are unknown, police said.

Police said Monday that they now also have images of the person believed to have ditched the vehicle. Police said they do not believe this person was involved in the collision. 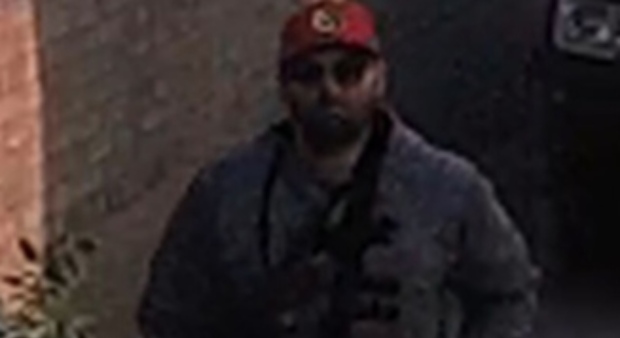 The person of interest, who allegedly ditched the vehicle, is pictured in this handout photo. (Toronto police)

But police are looking to identify the man, who has been described as a white male, with a beard and who wears glasses. He was wearing a grey sweater, black pants and a red hat.

On Sunday, investigators said they were looking to speak with 49-year-old Cory Munroe, 34-year-old Derek Desousa, and 30-year-old Amanda Rioux in connection with the incident. All are from Toronto.

On Monday morning, police said Rouix had been located by police. The other three people are still outstanding.

Family 'doing what they were supposed to do,' Tory says

Speaking to reporters on Tuesday, Mayor John Tory said there's nothing the city could have done to prevent the hit-and-run.

Tory said the family members were "doing what they were supposed to do" – standing on the sidewalk, waiting their turn to cross the street – when they were struck.

"I'm not sure there is anything we could have done as a city government that would have stopped someone who is driving, let’s call it, in erratic circumstances," Tory told reporters Tuesday.

"I’m terribly sorry about it."

Tory vowed earlier this year to lower speed limits and crack down on motorists who break traffic laws in an effort to reduce the number of pedestrian and cyclist deaths in the city.

The measures are part of an updated plan presented to city council over the summer, which also includes other traffic-calming efforts such as changes to road design and additional crossings. 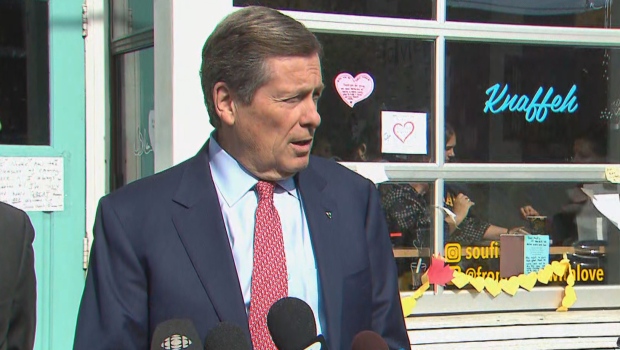 Meanwhile on Sunday evening, a man who identified himself as the father of the child said his son is “doing okay.”

"He's got a lot of energy. He loves to play, runs around a lot. I’m not sure he will be the same after this," the father, who did not want to be identified, told CTV News Toronto. “Right now he is still in the hospital being monitored, but he is okay."

The father said the other two women who were struck by the car are his wife and his mother-in-law. They are both recovering at Sunnybrook Hospital, but he said they don’t have any memory of what happened.

"It could have been a lot worse," he said. "Right now, I am shifting my focus more on making sure that whoever is responsible for this is accountable and they turn themselves in."

"They could have been killed today and if that was the case, he or she, whoever, left them there to die the way I see it."