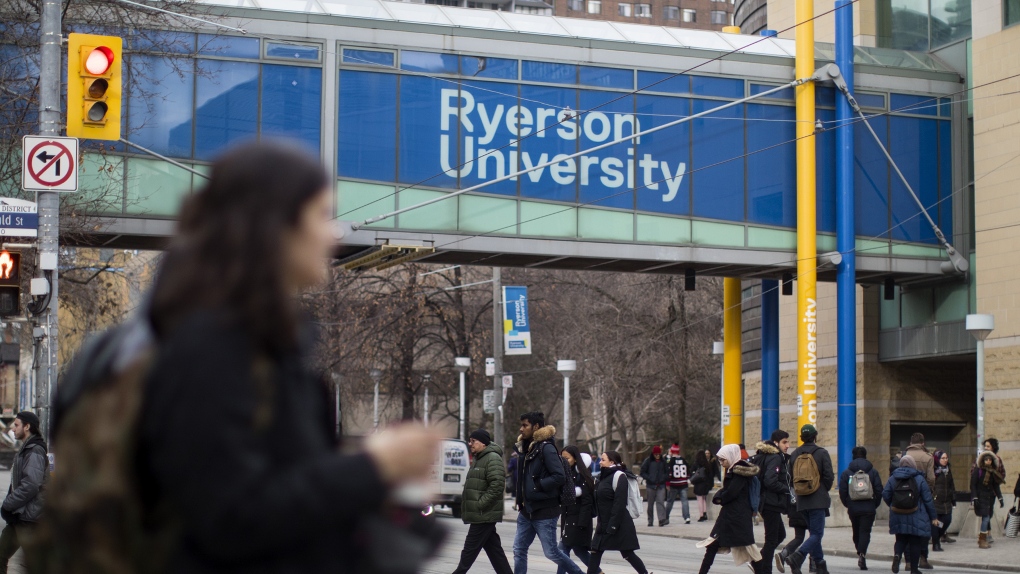 A general view of the Ryerson University campus in Toronto, is seen on Thursday, January 17, 2019. THE CANADIAN PRESS/Chris Young

Breanna Reid-Clarke has attended all her university classes over the last two years from her bedroom and it's taking a toll.

Studying from home as a result of the pandemic has meant feeling isolated, and has brought challenges in building strong connections with colleagues and instructors, says the 21-year-old.

Now, even as universities make plans for students to return gradually over the next month, some like Reid-Clarke say they aren't hopeful their post-secondary experiences can be turned around.

"My school experience (was) basically taken from me ... so it's frustrating," says Reid-Clarke, who studies politics and governance at Ryerson University in Toronto.

"I don't really have hope that everything is going to return, and if in the event that it does return, I just feel like things are just going to be shut down again."

Post-secondary institutions moved learning online when the pandemic hit and a return to campus that began in September was suspended when the Omicron variant arrived late last year. Many universities have now said they're planning a phased return to in-person education in the coming weeks.

Reid-Clarke says the uncertainty around her school schedule over the last two years has made it difficult to plan not just her academic activities, but also her shifts working at a retail store and a students' association.

He says he needs access to university laboratories and equipment to do his research, noting that remote learning has delayed some of his work.

"It's been really challenging for me to find a place to work on my inventions and projects," he says "I really was uncertain about it -- what I really should do going forward? Should I stop all my work for the year ahead?"

York University was among several post-secondary schools to recently announce a phased return to campus that is set to start Jan. 31. The University of Toronto and Waterloo University, meanwhile, said on-campus classes and activities will start resuming on Feb 7.

Ryerson University said it will start a gradual return on Jan. 31, with a full return anticipated by Feb. 28.

"I hope that many of you will welcome this return and see it as an opportunity to begin a post-pandemic way of living, learning and working," Ryerson president Mohamed Lachemi wrote in a letter to students last week.

Kelly Gallagher-Mackay, an assistant professor at Wilfrid Laurier University who has been researching educational experiences during the pandemic, says online learning works better for some and is less successful for others.

Going to university is more than just academics, she says, and online learning that's taken place so far has deprived students of some of the in-person experiences that come with being on campus.

"They don't go out for a coffee after class, they don't kind of take what they learned in the classroom and go into social life with other students," she says. "There's big lost opportunities for peer learning, for socializing."

Educators feel the impact too, she says.

Gallagher-Mackay says she got to know students she taught in-person much better than those she taught online.

"It was only a tiny handful of the students who rarely turn the cameras on (who) I know well enough to write a letter of reference for," she says.

"I knew quite a lot of my in-person students well enough to talk informally ... or get a sense of what their interests were, why they were taking our program, all those kinds of things. And that two-way knowledge leads students to be more likely to seek help from their professors when they need it."

Kristina Llewellyn, an associate professor of social development studies at the University of Waterloo, says remote learning has exacerbated inequality issues that some students from equity-seeking communities face when they study from home.

"It's everything from basic access to the internet, to the time that it takes for online learning when you're juggling full-time employment or other caretaking responsibilities," she says.

"We know that there's great inequality when it comes to who has to juggle, for example, during the pandemic, a full-time position in addition to their learning."

The pandemic has also compounded mental health issues many university students have had, she says.

"There are not enough robust resources happening on university campuses to address mental health concerns of students," she says. "We need to ensure that those resources are put in place now and post-pandemic."

This report by The Canadian Press was first published Jan. 24, 2022.

Canada's Chief Public Health Officer Dr. Theresa Tam and other federal officials are providing an update on the COVID-19 pandemic in a virtual press conference.

Foreign Minister Melanie Joly is today announcing a fresh wave of sanctions against Vladimir Putin's regime including a ban on importing Russian vodka, caviar and diamonds. The ban on the import of certain luxury goods from Russia covers alcoholic drinks, fish and seafood.

Why Canada is banning Huawei from participating in Canada's 5G network

The federal government is banning China's Huawei Technologies from involvement in Canada's 5G wireless network. Huawei and the Chinese government have vigorously denied accusations around the danger of spying, saying that the company poses no security threat.

The results of the recent coroner's inquest into the police killing of an Indigenous woman in New Brunswick demonstrate the urgent need for an Indigenous-led inquiry into systemic racism, according to the six chiefs of the Wolastoqey Nation.

A 12-year-old Ottawa boy is sharing his story after a magnet fishing trip turned up an unexpected find.

Mercedes just sold the world's most expensive car for $142 million

Mercedes-Benz confirmed on Thursday that it recently sold the world's most expensive car. A very rare 1955 Mercedes-Benz SLR coupe that had been kept in the German automaker's collection was sold to a private owner for €135 million, the equivalent of $142 million.

Blocking inflammation may be why some pain becomes chronic, study finds

A new Canadian study has found that using anti-inflammatory drugs and steroids after injury may actually increase the chances of developing chronic pain.

The cooling housing market has left some buyers with mortgages that can't cover the full cost of their home following an appraisal. Toronto-based mortgage broker Mary Sialtsis discusses what options these buyers have.