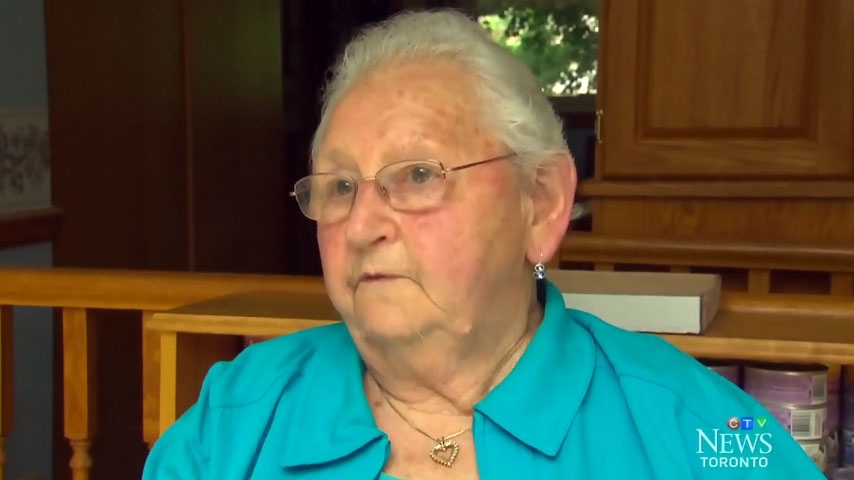 Doris Lane speaks from her Whitby, Ont. home after she was robbed while trying to sell kittens, on Monday, July 7, 2014.

A man and woman have been arrested and charged after an elderly couple was robbed in Whitby last week while trying to sell kittens out of their home.

Two people visited the home of Doris Lane, a wheelchair-bound woman, and her elderly husband on July 7. The pair was responding to an ad posted by the elderly couple regarding the sale of pet kittens.

Lane said she was hesitant to sell a cat to the couple after meeting them.

"I said you know what, I’m not going to give you a kitten….I don’t think you’re going to give it a good home," Lane told CTV Toronto on Wednesday.

Police say Lane and her husband were robbed after the suspects asked to use the washroom. They stole numerous personal belongings, including jewelry, cash and a purse while the owners weren't watching.

Police later arrested a 31-year-old woman and a 36-year-old man after receiving a tip from Lane's neighbour.

CTV Toronto's John Musselman reports that a neighbour noticed the suspects' vehicle on the elderly couple's driveway on the day of the robbery. He decided to take down the vehicle's licence plate number because he didn’t recognize it. The neighbour later passed on that information to police after he found out Lane and her husband were robbed.

As a result of an investigation, a female suspect has been charged with theft over $5,000, possession of property obtained by crime, possession of heroin and failure to comply with probation.

A male suspect has been charged with theft over $5,000.

Some of Lane's rings have been returned to her, but her purse is still missing.

With a report from CTV Toronto's John Musselman