TORONTO -- The producers of a TV show that had planned to film a violent scene at Mel Lastman Square—located near the street where Toronto’s deadly van attack took place last year—have cancelled their shoot on Wednesday.

A spokesperson for the City of Toronto said that the producers chose not to film in the area after members of the North York community complained.

“The producers of this production, in the end, opted to not shoot a scene at Mel Lastman Square today,” Brad Ross said on social media. “The city did not cancel the permit.”

John Filion, the city councillor for Willowdale, told CTV News Toronto that he heard about the filming plans on Tuesday.

“I immediately got on the phone to convey my concerns that it was highly insensitive and inappropriate and should be cancelled,” he said. “Many of those people are still traumatized and haunted that day.”

Filion said he intervened witih city staff to have the violent portion of the shoot cancelled, and then the series' producer decided to cancel the entire shoot.

On April 23, 2018, 10 people were killed and 16 others were injured after being struck by a rental van that jumped a curb and drove down the sidewalk. Alek Minassian, 26, has been charged with 10 counts of first-degree murder and 16 counts of attempted murder in connection with the event. His trial is scheduled to begin in February 2020. 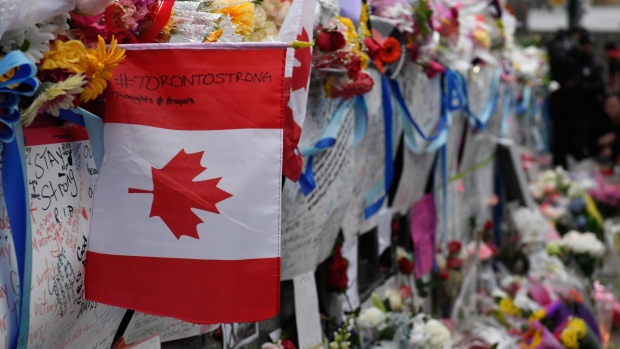 Filion said that the family and friends of the North York van attack victims, as well as the bystanders who were on the street or who rushed out of their buildings to help amid the chaos, are still traumatized by the incident.

“What exactly was going to be filmed sort of had a number of iterations, but suffice to say it would depict scenes of carnage in an area that had just had carnage.”

Speaking to reporters on Wednesday, Toronto Mayor John Tory called the North York van attack a “searing, historic hopefully once-ever tragedy in the life of our city.” He said that he spoke with the TV producer and that he was understanding, but both parties regretted the changes occurred last minute.

“There has been nothing like it ever before and that we need to be sensitive to the fact that it was only a year ago,” Tory said.

Ross said that the city will be reviewing its permit process, “especially in locations that may be sensitive, such as Mel Lastman Square and the Danforth.”

“All that said, we always aim to balance the needs of productions with that of residents, businesses and others to ensure a sustainable filming environment,” Ross said.

The television show “The Boys” is co-produced by Amazon Studios for Amazon Prime Video and is filming its second season in Toronto.