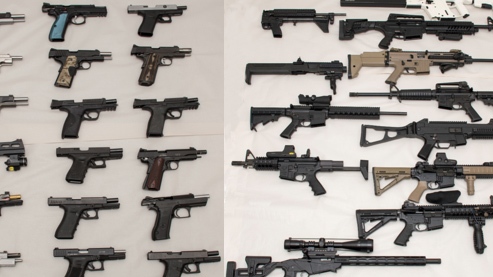 According to police, officers conducted a traffic stop in the area of City Centre Drive and Robert Speck Parkway at around 4:20 a.m. on June 25.

The driver was investigated and later arrested, police say.

The driver, identified by police as 51-year-old Rafael Lopes, of Collingwood, has been charged with possession of weapon for a dangerous purpose, carrying a concealed weapon, careless storage of a firearm, prohibited device, or ammunition, and possession of an opioid.

Two other search warrants were executed in connection with the case, including at a home in Toronto and another in Collingwood.

Officers also located a suspicious package at the Collingwood address, prompting police to evacuate several surrounding homes and call in the OPP Explosives Disposal Unit. It was later determined that the package posed no threat to public safety.

Anyone with additional information about the investigation is asked to contact police or Crime Stoppers anonymously.