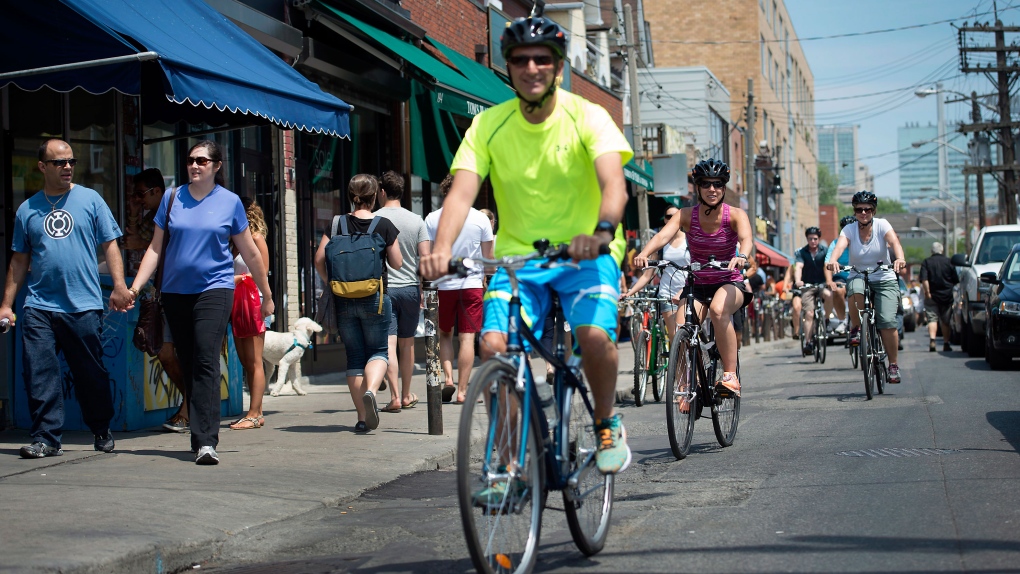 A group of cyclists is lead through the busy streets of Kensington Market while on an organized bicycle tour in Toronto on Saturday, July 12, 2014. (Darren Calabrese / THE CANADIAN PRESS)

The first-time visitor from Germany had resigned herself to the idea that Vancouver, the next leg of her cross-Canada tour, would make up for the disappointment. Seeing the city as a cyclist, she says, gave her a new perspective.

On a bright July morning, Kampmann, her husband Axel and their two teenaged children took a pass on the sightseeing bus and zipped around the city as many locals do -- by pedal power. Led by a guide from Toronto Bicycle Tours, Kampmann and her family covered significant territory in the span of a few hours, crossing well-known tourist destinations such as the CN Tower, the Rogers Centre and the Eaton Centre off their list.

But it was the sights otherwise inaccessible by tour bus -- the side streets and the little green patches tucked away between looming office buildings -- that made her trip special, she says.

"Baldwin Street impressed me," Kampmann says. "These small squares between the big buildings, this is very attractive, I think."

Cycling is a fixture in Toronto's downtown, with cars clogging many main arteries due to construction projects, suburban commuters and intense condo development. Looking to capitalize on Toronto's dedication to cycling, Terrence Eta founded Toronto Bicycle Tours in 2011. He provides all the gear, including bikes, helmets and lunch. For about $100 per person, all you have to do is show up.

"The bike is the greatest way to experience a city," says Eta. "When you're riding you become part of the environment."

The other benefit to biking tours, Eta says, is that they're easy to customize. His company offers rides around Church-Wellesley Village -- the heart of the city's lesbian, gay, bi and transgender community -- the Toronto Islands and even the outskirts of the city.

Guests can also request private tours, tailor-made by Eta, depending on what they want to learn about Toronto. They can even discover what it's like to bike in a Canadian winter, as tours are available year round.

For visitors who would rather explore the city's 67 bike trails independently, there are various resources available.

Bike Share Toronto, a 24-hour rental service, offers short-term membership options that allow users to borrow a bike for up to 72 hours. The largest service of its kind in Toronto, Bike Share has a network of 80 stations located throughout the core and approximately 800 fixed-gear bikes ready for use.

For visitors interested in exploring some of the city's nature paths, there are close to 100 independent bike shops ready to loan mountain and beach bikes, and a Toronto Cycling Map available on the city's website can be used to plan routes.

Bikes are allowed on public transportation in Toronto during weekdays on non-peak hours and any time on the weekend. All Toronto Transit Commission buses are equipped with bike racks, which can hold two bikes at a time.

Capital works projects in the pipeline will bring even more bicycling options in the years to come. In 2011, the city unveiled a plan to install an additional 500 kilometres of bike lanes. New infrastructure projects leading up to the 2015 Pan Am and Parapan Games will leave Toronto with an 80 kilometre multi-use trail, as well as new parkettes and neighbourhoods to explore.

Bike tourism in the province is not new -- a 2010 survey by the Ministry of Tourism found two million visitors to Ontario cycled while travelling the province and spent about $391 million during their stay. But Toronto has a long way to go before reaching the status of Copenhagen and Amsterdam, cities known internationally for cycle tourism, Eta says. The infrastructure just isn't there yet and the city still has serious congestion issues to work out, he says.

For that reason, his tours tend to avoid main arteries for the most part, snaking instead through side streets and alleyways. With help from their guide, though, the Kampmann family glided through mid-day traffic. They dodged potholes, streetcar tracks and cabs and they weren't fazed by honks from frustrated drivers.

"I think it's a little bit of an adventure because I'm not used to riding my bike through such a huge town," says Kampmann. "I'm happy that we joined this bicycle tour, to see all these different neighbourhoods and streets. It's a very different and beautiful town."