Tory announced Friday morning that he will run for re-election in October, saying that he decided to seek a third consecutive term after getting his family’s blessing and support.

“They're very understanding of that and we just had some discussions about how I could make sure that I try to achieve that balance that is always difficult for people in public life to achieve, in terms of the demands that you have on your time,” he told reporters at a press conference on Friday.

First elected in 2014, the 67-year-old had previously mused about being a two-term mayor but backed away from that in recent years, suggesting that a third term was possible.

Tory said that he loves leading Toronto and wants to continue advancing the city’s goals and growth.

“I'm so enthusiastic about what we can do if we can protect our gains and if we can then build on those gains with transit, with housing, with film, with technology…,” he said.

If Tory is re-elected and serves the entire four-year term he would become Toronto’s longest serving mayor, exceeding the 11 years that Art Eggleton spent in office (1980 to 1991).

Tory spent much of his second tenure leading the city through the COVID-19 pandemic. At the beginning of the global health crisis, he declared the city’s first state of emergency in response to the deadly virus.

Tory said a part of his reason for seeking re-election is to continue the work that was halted due to the pandemic.

“...The concentration that we've had to put onto the pandemic and the management of the pandemic…made it more difficult to move ahead with some of the other things that are so important to building a city going forward,” Tory said.

“And so I want to continue to dedicate myself, to put my experience to work, to make sure I can maintain the partnerships that we've established, to make progress on jobs, on housing, on transit, on the film industry.” 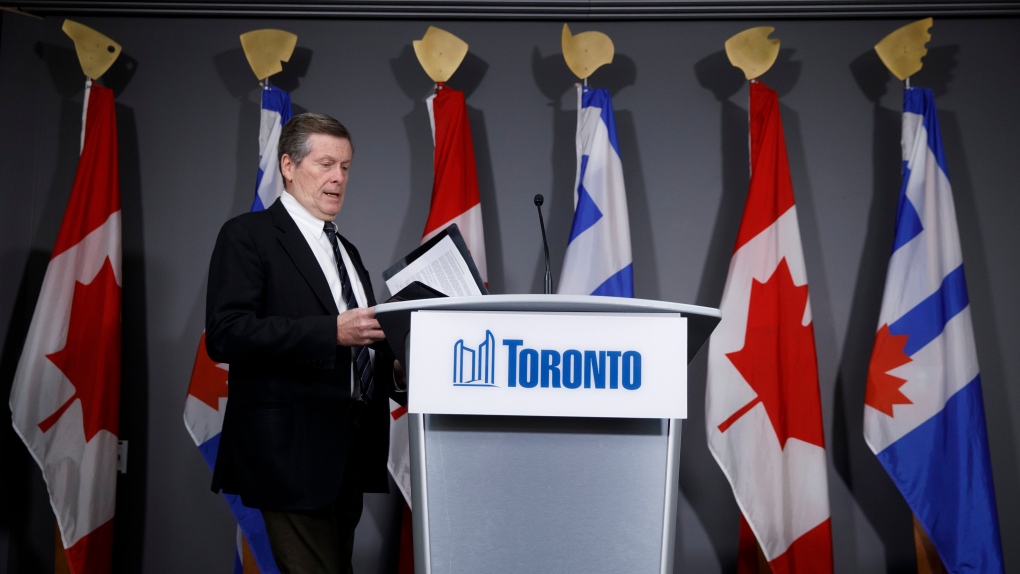 Toronto mayor John Tory arrives to a press conference to update media on a tentative deal reached between the City of Toronto and the city's outside workers, in Toronto, Saturday, Feb. 29, 2020. THE CANADIAN PRESS/Cole Burston

“Mayor Tory has been such a strong leader and actually folks from across this country have looked to him for strength, particularly what we've gone through over the last two years,” he told CP24.

“I do believe Torontonians will give him a covered mandate. I do think that he has worked hard enough on behalf of Torontonians,” he added.

Tory said he will release his election platform in May when campaigning begins, but for now wants to continue focusing on governing the city.

“We have a huge roster of things that are going to happen next week, for example the executive committee that involves the implementation of transit, more measures to help people experiencing homelessness and so on. The work of the City Hall and the work of the mayor and council colleagues goes on.”

Tory was first elected as Toronto’s mayor in 2014. He was re-elected in 2018 and returned to City Hall with a slimmed-down council following Premier Doug Ford’s decision to slash the number of wards in the middle of the campaign.

If Tory wins a third term he says a fourth run is very unlikely.

“I'll be lucky if the voters entrust me with a third term giving me the privilege of having this job for another four years, and beyond that I think there'll be other things that I might do.”

The municipal election is scheduled for Oct. 24.