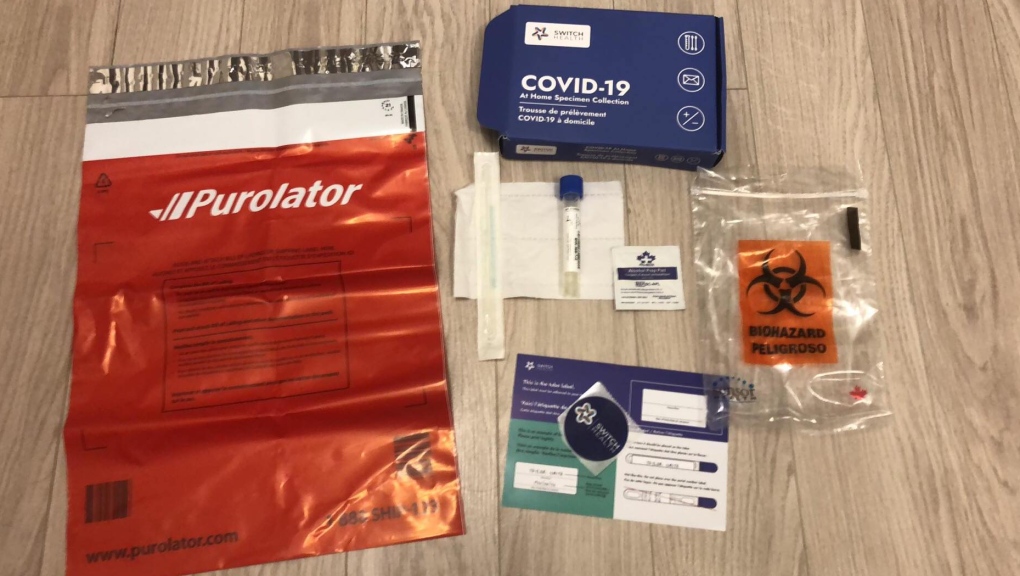 TORONTO -- A Toronto man’s mandatory travel quarantine was extended by six days — amounting to nearly three weeks of isolation and a missed vaccine appointment — after three of his government mandated COVID-19 tests were deemed “damaged.”

On May 24, Warren Kosoy drove across the Canada, U.S. border, after travelling to Charlotte, North Carolina on a work-related trip. At home in Toronto, he began his mandatory 14-day quarantine.

When Kosoy tried booking a Purolator pick-up to deliver his COVID-19 test to Switch Health’s lab, the shipment was unavailable for 28 hours. During the wait period, the company advised Kosoy to place his test in the fridge.

Leave it to Canada to partner with @SwitchHealthCA. On day 11 of 14 day quarantine and they unsurprisingly managed to damage my test after taking way too long to deliver it to the lab. Have to wait 2-5 business days to get a new kit and they would not allow someone to pick it up

“I phoned three or four times and all of them said the exact same thing, we cannot tell you what happened to the test or why it was damaged,” Kosoy said. The health-care company notified him that a new test would arrive in one to five days, risking extending his quarantine, if it landed on the later side of that timeline.

The following day, a new testing kit arrived, but it was a Friday. “I didn't want to deal with doing it on Saturday, and being told we can’t pick it up on Monday, and then have the whole repeat again,” Kosoy said.

On day 16, Kosoy received the news: his second test was “damaged,” although the company could not disclose to him what caused another faulty test. Switch Health sent a nurse to his home to rush results for the following day.

In response to an inquiry from CTV Toronto, a spokesperson from Switch Health said, “There are rare occasions when kits are incorrectly registered or damaged, and replacement kits are sent out to travellers right away.”

Now @SwitchHealthCA is choosing to ignore my messages after lying that the third test would be expedited. But why bother responding to someone when you're federally funded and the only testing option? I have never dealt with a worse company in my life. Looks like I am not alone! pic.twitter.com/zM2o9rwvCv

Day 17 of Kosoy’s quarantine came and went, with no word on his results. One customer service employee asked him for a Purolator number, despite the fact that a nurse had personally come to his home and tested him to avoid shipping delays. Once the error was realized, they promised his results by midnight.

The following day, Kosoy missed his appointment for his first dose of a COVID-19 vaccine.

Then, his third test came back “damaged,” which according to Switch Health is very rare. “The number of travellers waiting past 14 days in quarantine is less than one 1 per cent,” a spokesperson told CTV Toronto.

That night, another nurse was sent to perform Kosoy’s fourth test. On Day 20, after six additional days of quarantine, Kosoy received a negative test.

“My main issue was the lack of empathy and complete lack of a backup plan. I’m sure I’m not the first person who has had a damaged test,” Kosoy said.

Others have voiced frustration on social media over delayed test results that significantly extended their quarantines. Trennon Paynter, head coach of a team Canada ski team, wrote on Twitter that his travel quarantine was three weeks long due to delayed delivery results.

“The amount of additional quarantine time that your abject failures imposed on countless Canadians is staggering,” he said on social media.

Another traveller posted on Twitter to express frustration on day 18 of their quarantine, still waiting on results, and a separate user said they completed four tests, with no word from the company for nine days.

While delayed tests and extended quarantines are a rarity, according to Switch Health, the company told CTV Toronto, “we do not want to see anyone in quarantine longer than necessary.”