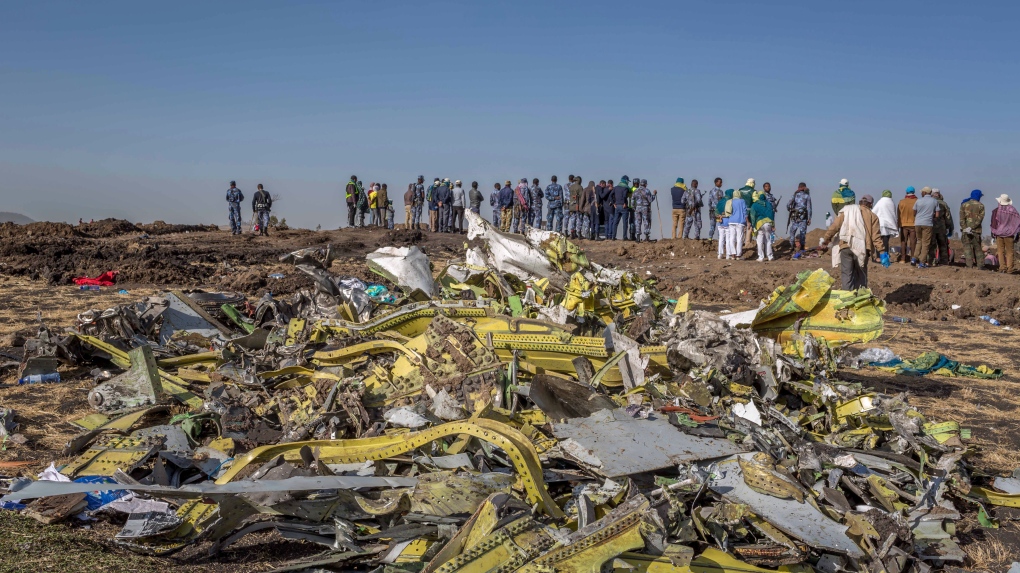 Wreckage is piled at the crash scene of an Ethiopian Airlines flight crash near Bishoftu, or Debre Zeit, south of Addis Ababa, Ethiopia, Monday, March 11, 2019. A spokesman says Ethiopian Airlines has grounded all its Boeing 737 Max 8 aircraft as a safety precaution, following the crash of one of its planes in which 157 people are known to have died. (AP Photo/Mulugeta Ayene)

TORONTO -- A 72-year-old Toronto man was identified Wednesday as one of the Canadian victims of the plane crash in Ethiopia.

The Ismaili Centre said Ameen Noormohamed was on board the Ethiopian Airlines plane that went down on Sunday moments after takeoff from Addis Ababa, killing all 157 passengers and crew.

"We understand that members of the deceased's family have made their way to Kenya and are in the midst of making arrangements," the centre said in a statement.

Noormohamed, who lived in the Toronto area, was one of 18 Canadians who died in the crash.

The youngest was a nine-month-old baby girl -- the only Canadian citizen in her family -- who was travelling with her mother, grandmother and two older siblings to meet her grandfather in Kenya for the first time. Rubi Paul's grandfather said he was struggling to accept the devastating loss of much of his family.

A Brampton, Ont., family was also mourning six of its members who had been on their way to enjoy a safari in Kenya. Two teen sisters -- 13-year-old Anushka Dixit and 14-year-old Ashka -- their mother, Kosha Vaidya, 37, and father, Prerit Dixit, 45, were killed. The girls' grandparents, who were believed to be Indian citizens, were also killed in the crash.

A Hamilton-area family, meanwhile, was mourning a special education teacher who had a passion for volunteering with the vulnerable. Cody French said his mother, Dawn Tanner had been travelling to visit friends in Kenya.

A number of other victims had been travelling to a United Nations Environment Assembly in Nairobi when their Ethiopian Airlines flight went down.

Micah Messent, Danielle Moore and Angela Rehhorn and Darcy Belanger were all slated to attend the conference through various humanitarian or conservation organizations.

Ethiopian authorities have said it will take several days to identify the remains of the victims.