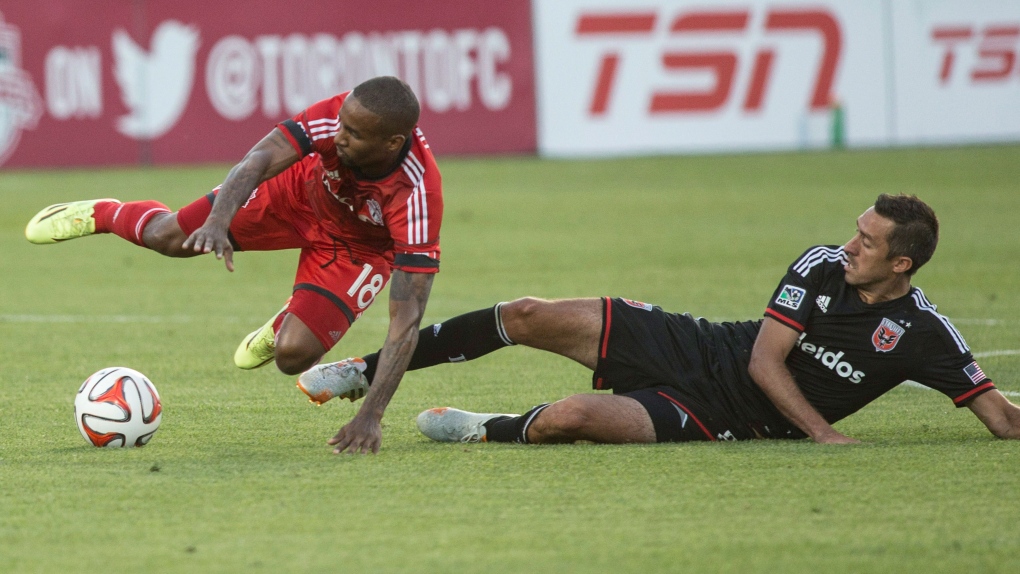 TORONTO -- Members of the Toronto FC are preparing to make a unified and distinctive style statement away from the pitch with the unveiling of their new team suits.

The classic, three-piece suits custom-made for the MLS squad by Garrison Bespoke, a high-end men's tailor's shop in Toronto, are slated to be revealed on July 14, the culmination of an intensive process that has been months in the making.

"They have been working very hard behind the scenes to upgrade the talent of the team this year to make it a world-class football club. And with that, they have a vision to create a world-class image," said David Tran, director of special projects at Garrison Bespoke.

Having members of the Maple Leafs, Raptors and Blue Jays on their client roster has afforded the bespoke tailors unique perspective and insight on key requirements needed to outfit male pro athletes who typically have broader shoulders and larger thighs, Tran noted.

"To tell you the truth, with what some of them wear, even a rubbish bag is probably better," a tongue-in-cheek Nelsen said at the team's north Toronto training centre back in April. "So the more we can help the guys out in terms of that, the better in my opinion."

The formal team suit has become an integral part of soccer and style culture with some of the world's leading luxury labels putting their creative stamp on the garments.

London squad Arsenal has its midnight-blue suits designed by Paris fashion house Lanvin, with the team's crest emblazoned in gold on the front of the jacket and cufflinks engraved with the famed Arsenal cannon. And while Italy crashed out early from the World Cup, the team made fashionable waves with their sleek, three-piece Dolce and Gabbana suits.

While the Toronto FC's new ensembles will feature their signature red and white colours, the swank suits will be a decided departure from the athletic kits worn during games.

Tran said the tailors have been working closely in tandem with Toronto FC to understand the team's vision for their off-field garments and to fine-tune fashionable details on their formal wear.

"What we really wanted to do here is create something really unique for Toronto FC, something that's representative of our city, their team colours and a Canadian tailor."

Toronto FC captain Steven Caldwell has been taking on a leadership role away from the pitch in the suit's creation, thumbing through fabric swatches and providing input on what he thinks will be best for the squad. The 33-year-old Scottish defender is one of the team's best dressers who has been seen strapping on suspenders after a match.

"Obviously, I have my own personal style that I like and that I want to wear, but it's difficult for me here because I'm trying to give a balanced opinion that I think most of the team will like," Caldwell said during a fitting session at Garrison Bespoke.

"That's a very difficult thing to do, because as I've found out about things like this before, somebody will always be unhappy about a choice of fabric or a choice of shirt. That's one of the challenges of being a captain and something that I've tried to do my best with."

Caldwell said he likes the addition of the waistcoast to the suit which affords the team to chance to play with different style options.

"We can change it up, change the shirt up and have a more flamboyant shirt that we might wear in the summer, or maybe drop the jacket and just wear a waistcoast and the shirt, maybe with a tie.

"So we've got options with things that we can chop and change, but being creatures of habit and superstitious, I'm pretty sure if we're wearing something and we're winning we'll stick to that for a while," he added, smiling.

Caldwell said they'll certainly wear the suits at home for games, but was unsure if they would wear them on the road.

He said he's been fortunate to wear team suits in the past during his playing days in England -- but nothing as unique as the TFC ensemble.

"It's exciting to have something so nice and we hope to wear as many times as we can."