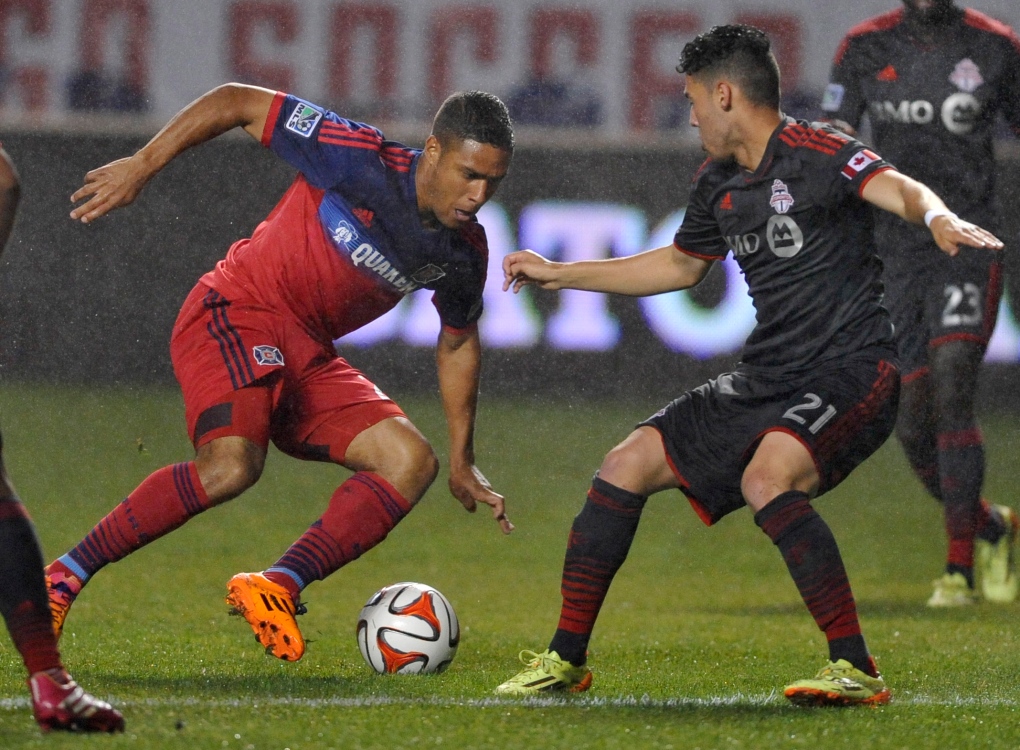 Chicago Fire's Quincy Amarikwa, left, dribbles around Toronto FC's Jonathan Osorio (21) during the second half of an MLS soccer game in Bridgeview, Ill., on Wednesday, July 2, 2014. The game ended in a 1-1 tie. (AP / Paul Beaty)

BRIDGEVIEW, Ill. -- Being down a man while also missing two stars didn't seem to faze Toronto FC on Wednesday.

Toronto (6-4-3, 21 points) ran its unbeaten streak to six as it resisted late Chicago pressure to earn a 1-1 tie at soggy Toyota Park.

"Any point on the road is a good point, especially when you're down to 10 men," said Toronto coach Ryan Nelsen, whose team remains unbeaten (3-0-3) in league play since a May 3 loss to New England. "They (the Fire) did very well in the second half and pushed us hard. We had to defend and we defended very well."

Forward Luke Moore was issued a red card and ejected in the 29th minute after a mid-air collision with Fire midfielder Chris Ritter and Toronto played the final hour with 10 men.

Toronto FC was also outshot 20-7 and trailed in possession by a lopsided 62-38 per cent. Yet Chicago mustered only one score - Harry Shipp's sixth goal of the season in the 56th minute.

"We did enough to win the game, when it's 10 men against 11 we should win the game," said Fire coach Frank Yallop, whose team is winless in five games. "We had our chances, it's frustrating. We had them. That's our problem right now, we can't seem to win a game."

Numerous other Chicago shots went wide, fell short or were stopped by Toronto goalkeeper Joe Bendik, who had five saves.

In the 73rd minute an apparent go-ahead goal by Fire defender Bakary Soumare was waved off on an offside call.

Toronto was playing its second game in five days while Chicago was among the last Major League Soccer teams to restart the season after a lengthy World Cup break.

"This point is very valuable," Nelsen said. "It proves that away from home we've been down to 10 men twice and we've managed to get something out of the game and that was extremely important."

Moore's ejection came after a midfield battle for possession with Ritter. Moore appeared to elbow Ritter in the right temple. Ritter temporarily left the game but was back within three minutes with his his head bandaged.

The ejection includes an automatic suspension for Saturday's home game with D.C. United.