Moore scores for Toronto FC in 2-1 loss to D.C. United 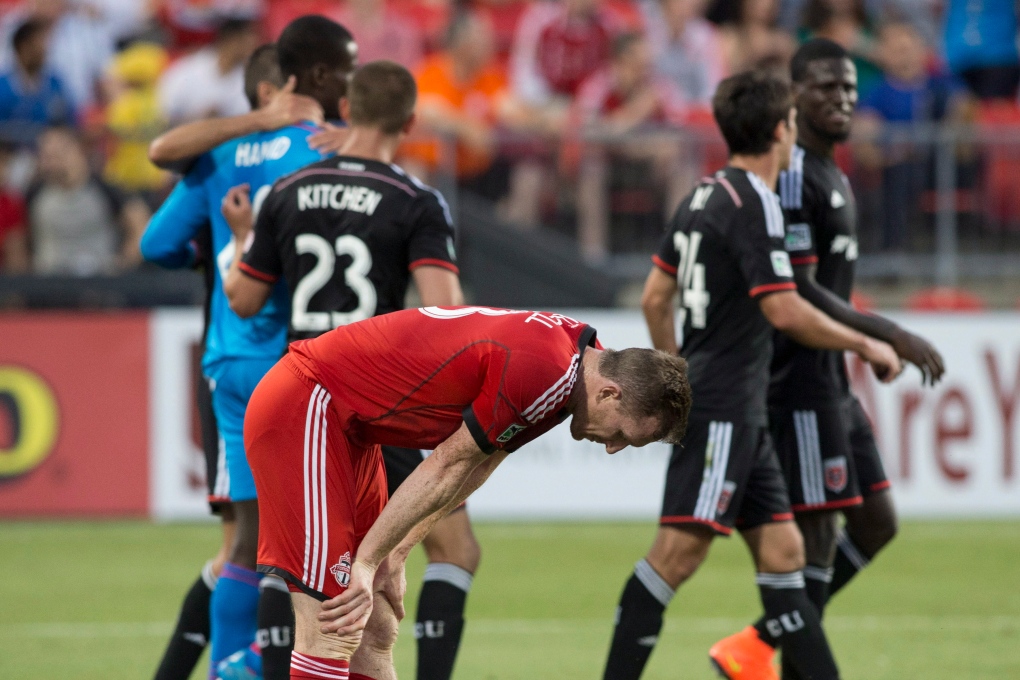 Toronto FC's captain Steven Caldwell, centre, reacts at the final whistle as his team loses 2-1 to D.C. United in MLS action in Toronto on Saturday, July 5, 2014. THE CANADIAN PRESS/Chris Young

TORONTO -- Two "silly mistakes" led to two shots on net, and cost Toronto FC a victory in their first game back at BMO Field in almost a month.

Nick DeLeon and Perry Kitchen scored on D.C. United's only two shots on target Saturday night in a 2-1 victory over Toronto, putting an end to TFC's six-game unbeaten streak.

"We were very disappointed because we felt we were right in the game, obviously," said captain Steven Caldwell. "Second half, we gave away two very sloppy goals, cost us in the end.

"We rolled up our sleeves and did some lovely little stuff, and huffed and puffed. And just couldn't quite get that finish."

Moore, who was originally slated to sit out Saturday night on a one-game suspension, scored in the 60th minute to tie the game 1-1, pouncing on a rebound off a shot by Jackson and poking the ball past D.C. goalkeeper Bill Hamid.

"Disappointing for us," Moore said. "We've made good strides over the last couple of weeks. Today we maybe took half a step backwards."

Moore had received a red card and suspension in Toronto's 1-1 draw at Chicago on Wednesday, but TFC appealed and the league's Independent Review Panel rescinded both his one-day suspension and fine.

DeLeon had opened the scoring in the 54th minute, dribbling in on net with Toronto's Nick Hagglund draped all over him. DeLeon managed to shake Hagglund long enough to get off a left-footed shot that sailed past Toronto goalkeeper Joe Bendik and into the right corner.

Toronto had been dominating possession and appeared poised to score again in the Eastern Conference showdown when Kitchen stunned the red-clad capacity crowd of 22,581 fans in the 70th minute, heading in a goal off a corner kick to put United back on top.

Toronto hadn't lost an MLS matchup since May 3 -- 2-1 to New England at BMO Field -- and Saturday's result was a disappointing one for a team that has been marching up the Eastern standings and is on pace to claim its first playoff berth in franchise history. TFC (6-5-3) went into the game two spots behind second-place D.C. United (8-5-4) in the East.

Toronto was reduced to 10 men for the last few minutes when Hagglund was shown a red card after Eddie Johnson, the last man back for United, went down in the 88th.

"What frustrated me was how many times in the first half, and the game, that we broke away and they pulled us down, knocked us down and we continued and played on. And nothing happened," Nelsen said of the referee's decision.

"Unfortunately when it came to our one, the player I think obviously sold a big dummy, did a big dive. . . He was the last man so the correct decision was the red, but if you look at it, there should have been a big pool of water under him when he did that big dirty dive."

The referee originally pulled a yellow out of his pocket, but switched it to red several moments later, which puzzled Toronto players.

"There's a lot of things I've seen that I've never seen before, to be honest. But obviously I don't want to criticize referees because I've never been a referee," said Defoe.

"It's absolutely irrelevant what the call IS," Caldwell added. "The call WAS a yellow card and I've never known anything like it. Are we going to start changing penalty decisions, reassessing everything from above, from the stands, and telling the referee in his ear? Essentially there's no point having the referee out there."

Despite missing a man, TFC poured it on in the last couple of minutes, and had a couple of excellent chances to tie the game in injury time. Moore fired a blistering shot that glanced just wide of the left corner, the Daniel Lovitz, a second-half substitution, had a shot that was saved only by a spectacular highlight-reel effort by Hamid.

"How he brought that down and showed his technique, it was fantastic. An incredible save," Nelsen said.

The game marked the return of midfielder Michael Bradley, who received loud applause during team introductions. The Toronto midfielder is fresh off the United States' heartbreaking exit from the World Cup in the round of 16.

"I felt good, excited to be back," Bradley said. "I'm disappointed that the game went the way it did, because this was a big game against a team close to us in the table and it would have been nice to capitalize."

Bradley had a spectacular scoring chance in the 34th minute when Defoe found the American with a nice pass. But Bradley launched his shot just wide of the D.C. net.

Defoe had his own scoring chance five minutes earlier when he slid onto a low cross from Justin Morrow, but Hamid got his hands on it.

Morrow had a decent scoring chance early in the second half when he got the ball alone at the corner of the six-yard-box, but sent his shot wide of the far post.

Caldwell said it's important the players put Saturday's loss behind them.

"We don't look back," he said. "We get another run of six plus games, hopefully six, seven, eight, nine, 10 games. Disappointing to lose that run, we were feeling good and playing very well. On a different day today we could have won the game."

Toronto remains at home for its next two games -- TFC hosts Houston on July 12, then the Vancouver Whitecaps on July 16.