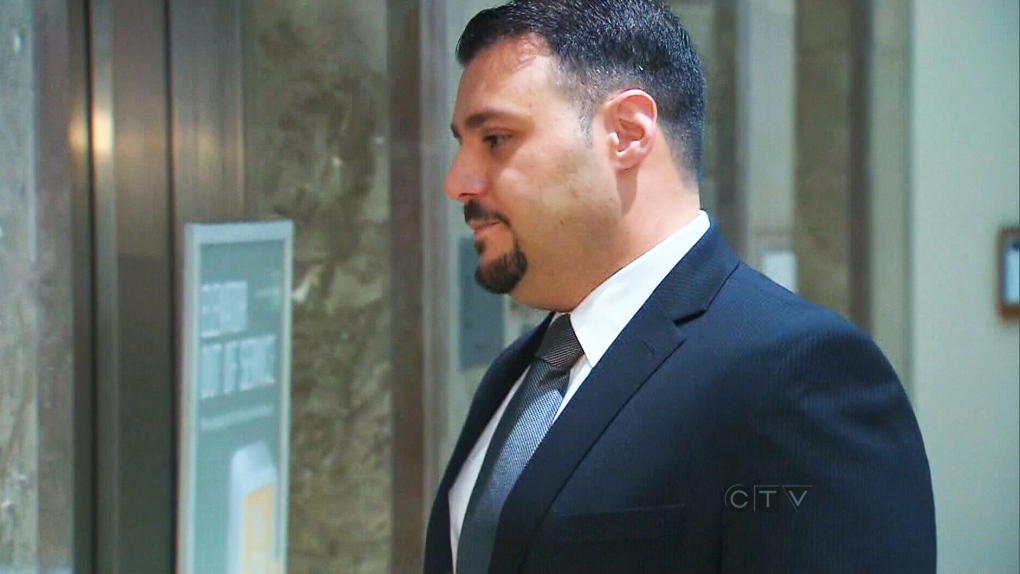 Const. Babak Andalib-Goortani is charged with assault with a weapon over allegations excessive force was used against a protester at the G20 summit in 2010

TORONTO -- A Toronto police officer accused of using excessive force while arresting a man at a G20 protest three years ago broke down in court Monday as he recalled one of the most challenging days of his career.

Const. Babak Andalib-Goortani, who has pleaded not guilty to assault causing bodily harm during the arrest of Toronto man Adam Nobody, repeatedly said his actions were well within the parameters of the instructions he had received over the years.

"The application (of force) I used was in strict compliance with my training," the 33-year-old officer said on the witness stand.

Nobody, a 30-year-old stage hand, has testified he was tackled at a protest at the Ontario legislature on June 26, 2010, and was hit several times as several officers piled on top of him.

A photo of his bruised right side has been put into evidence.

Both sides agree that Nobody's arrest was lawful, but the central question is whether the force Andalib-Goortani used was lawful.

Andalib-Goortani was part of a team patrolling the streets during the G20 protests but he noted they hadn't received much specific training to deal with the rioting that took place. They also did not have the kind of protective shields and body padding members of the specialized Public Order Unit had that day, he said.

In the moments leading up to Nobody's arrest, Andalib-Goortani described the troubling dispatches coming over his police radio about crowd agitators breaking store windows, throwing objects at officers and setting police cars on fire.

"There was nothing I could do," he said of what he heard over his radio.

Andalib-Goortani was then placed among a team of officers asked to help arrest people singled out by authorities. Their job was to run from behind a line of shielded officers, grab someone marked for arrest, and bring them back behind a police line, he said.

He went on to say he aimed what he called a first "distractionary strike" with his baton at Nobody's thigh, and then two more strikes moments later from a different angle when he saw it seemed Nobody was still strongly resisting arrest.

"It was force I felt that I had to use to gain control over Mr. Nobody," Andalib-Goortani told the court. "I believed he was getting up to run away."

Prosecutor Philip Perlmutter suggested Andalib-Goortani didn't need to apply his baton because Nobody was already pinned to the ground.

During his cross-examination of the officer, Perlmutter suggested Andalib-Goortani had been overwhelmed by the events of the day and "just broke."

"You snapped and you lashed out in anger and frustration," Perlmutter argued.

"I believe I was helping to finish this arrest," countered Andalib-Goortani.

Perlmutter also suggested the resistance Andalib-Goortani saw before using his baton could have simply been the movement that came from an officer trying to extract himself from underneath Nobody after the two rolled to the ground together.

Andalib-Goortani said that he had only seen what he thought was a man trying to actively resist arrest.

"That didn't cross my mind," he said in response to Perlmutter's argument. "We ran out to arrest him."

The trial continues this week.

A separate trial is set for next year for Andalib-Goortani on a second charge of assault with a weapon that was laid by Toronto police.