Man accusing police of assault during G20 was no bystander: lawyer 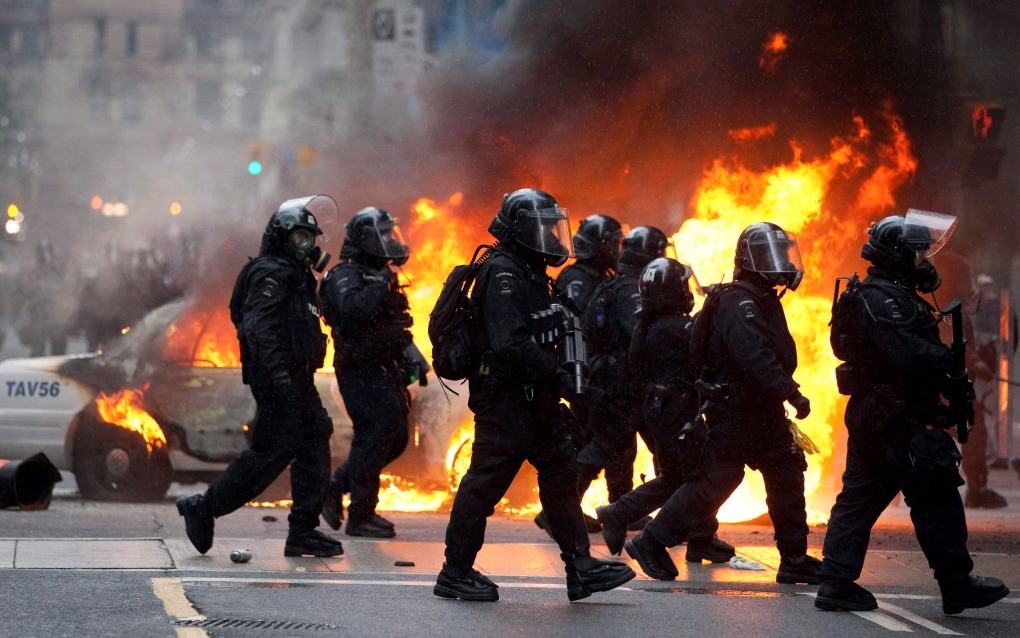 TORONTO -- A man accusing a Toronto police officer of assaulting him during G20 protests was not the bystander he claims to have been, rather he was one of the agitators, the officer's lawyer suggested Thursday.

Adam Nobody, a 30-year-old stage hand, has testified he spent much of June 26, 2010, playing video games, unaware that radical elements had broken out of a peaceful march of G20 demonstrators and were breaking windows and setting fire to police cars.

When he did go to the Ontario legislature -- an area designated as the protest zone -- he didn't like what he saw, as police started arresting people, so he confronted them, but wasn't aggressive and didn't swear, he said.

He sat on a curb and chatted for a while with a friend, he said. Nobody was knocked from behind by a police line and he dropped his water bottle containing whisky and water, he said. Not allowed to retrieve it from behind the police line he left the park to buy more booze, he said.

Nobody returned with a six-pack of beer and a bristol board, on which he wrote "Let Donna graduate," a reference to the TV show "Beverly Hills, 90210," he said.

It was as Nobody was colouring in the letters that he saw a police line advancing so he got up and walked away and that's when he was tackled by police, he said. Nobody alleges he was hit several times by the officers. Const. Babak Andalib-Goortani has pleaded not guilty to assault with a weapon.

Nobody was really there all afternoon, taunting the police lines, yelling at the crowd that they didn't have to obey police orders, Black suggested.

One police inspector gave a statement quoting Nobody as egging on the crowd, "Saying screw the police...we don't have to go," Black read from the statement. "We're going to stand. We're going to fight."

Not true, Nobody said.

Black showed a photo of the friend that Nobody chatted with carrying a sign saying, "The government lies to us. The media hypnotizes and manipulates us. The banks steal from us...The rich elitists laugh at us. But we the happy consumer zombies say enough is enough."

Nobody denied that his friend is an anarchist, saying, "No. He's a bar manager."

The water bottle Nobody dropped didn't just contain alcohol and water, Black said, citing a forensic report. It also contained toluene, which is a volatile, ignitable liquid used as a solvent in fuels. Testing showed that it easily ignited at 23 C.

Nobody said he was going to drink the whisky and water and didn't know why trace amounts of toluene were found in the bottle.

"There was a lot of people bringing flammable liquids to the demonstrations (to make Molotov cocktails)," Black said. "Is that what you were going to do?"

"Absolutely not," Nobody replied.

Black then asked Nobody why then, was he wearing gloves on a hot, sunny day?

Nobody said several times that he was not wearing gloves, but when Black showed a photo of Nobody at the protest, clearly wearing black gloves along with his T-shirt and shorts, Nobody said those were his cycling gloves and he likely just didn't take them off after riding his bike over to the legislature.

By the time police finally caught up to Nobody they had already tried to arrest him several times that afternoon, but he had slipped back into the crowd, Black suggested.

Both the Crown and defence have agreed that Nobody's arrest was lawful -- the central question is whether the force Andalib-Goortani used was lawful.

Black also suggested that while Nobody is testifying his pending $11-million lawsuit against police, including Andalib-Goortani, is top of mind.

"As you sit in the witness box, Mr. Nobody, the thought isn't in your head, you know, 'If I can put in a solid performance today it's going to help me a lot?" Black asked.

"I think it will help justice," Nobody replied. Black told him, "Let's leave the justice system out of it."

Nobody's cross-examination continues Friday. A separate trial is set for next year for Andalib-Goortani on a second charge of assault with a weapon that was laid by Toronto police.