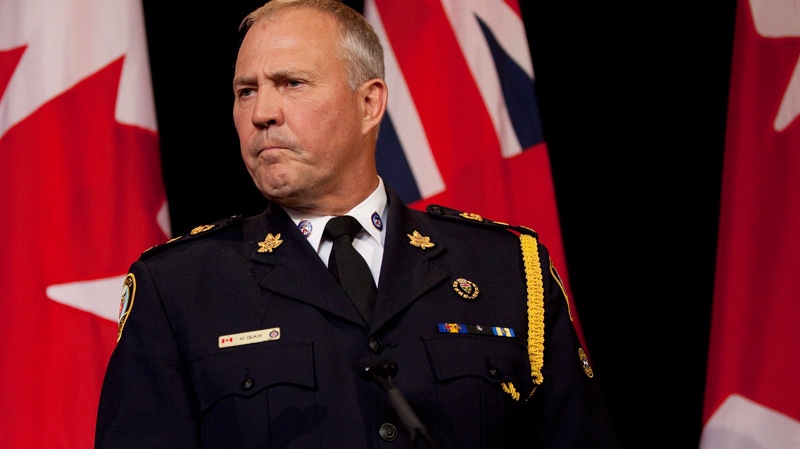 TORONTO -- An Ontario court has ordered the province's police watchdog to re-examine a complaint about instructions Toronto's top cops gave to officers during the G20 protests three years ago, calling the agency's failure to conduct the probe "unreasonable."

The complaint came from Jason Wall, a Toronto man whose arrest in June 2010 was deemed unlawful after he brought his case before the Independent Police Review Director.

Wall had asked the IPRD to further investigate the role Toronto police Chief Bill Blair and other senior officers played in his arrest after it was found those who detained him may have been acting on instructions from "higher up in the chain of command."

The IPRD did not go forward with that line of questioning, suggesting such a probe would not be in the public interest.

Lawyers acting on Wall's behalf took the IPRD to court over the issue, prompting a ruling which was delivered Thursday.

The Ontario Divisional Court said the IPRD's failure to fully investigate Wall's complaint was found to be "unreasonable" and "violates principles of procedural fairness and natural justice."

"The director (of the IPRD) failed to comply with the requirement of his empowering legislation that he provide reasons for his decision. By failing to provide reasons the director also breached fundamental principles of fairness and natural justice," the ruling said.

The ruling also agreed with arguments made by Wall's lawyers that the IPRD had been "close minded" on the issue.

The director of the IPRD said he was studying the court's decision to determine next steps.

"The court has given a clear order to re-screen the matter. I respect that decision," said Gerry McNeilly.

Wall had been walking home on June 27, 2010 when he was arrested by police looking for those responsible for vandalism during the G20 protests.

He was held for 28 hours before he was released without being charged.

He was told he was arrested for "disguise with intent to commit an indictable offence" and the officer who detained him said he had orders from "upper command."

But Wall's lawyers said there was no disguise and that Wall had just worn a bandana around his neck.

The IPRD investigation found those officers may have been acting on orders from "higher up in the chain of command" including possibly the chief of police. One of the officers told the agency he had orders to detain anyone wearing a bandana or a mask.

When Wall pushed for the IPRD to fully investigate his complaint, including what role senior officers or Toronto's top cop may have played, he was told it would not go forward.

One of Wall's lawyers said the court's decision was a significant one.

"The police must be accountable to the people they have sworn to protect and that doesn't just mean the rank and file officers who execute the orders, it also means the senior officers who give the orders," said co-counsel Nader Hasan.

"(Wall) knows that he was wrongfully arrested but he wants to know why that happened and who gave the orders, and he's entitled to that."

Hasan added that the case sets "an important precedent."

"The IPRD has to do its job, has an obligation to do it and when it doesn't do its job, people are going to hold it to account. More than anything that's what today's decision stands for."