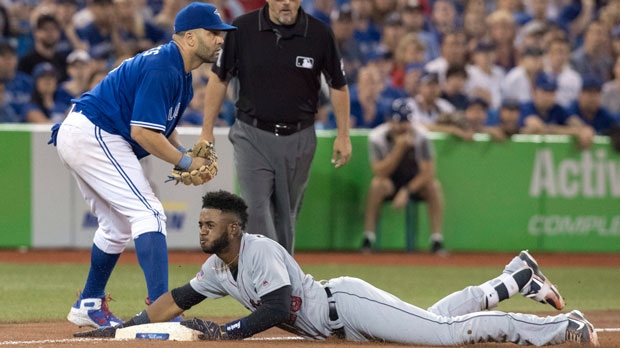 Detroit Tigers' Niko Goodrum slides safely into third with a triple as Toronto Blue Jays' Kendrys Morales looks on in the tenth inning of their American League MLB baseball game in Toronto on Monday July 2, 2018. (THE CANADIAN PRESS/Fred Thornhill)

TORONTO -- Jose Iglesias drove in Niko Goodrum for the winning run in the 10th inning as the Detroit Tigers defeated the Toronto Blue Jays 3-2 on Monday.

Goodrum hit a one-out triple off Blue Jays reliever Seunghwan Oh (4-3), and Iglesias followed with a sacrifice fly to right field to put the Tigers ahead.

Blaine Hardy recorded three outs in the bottom of the 10th for the save. Hardy replaced reliever Buck Farmer after a leadoff single from Lourdes Gurriel Jr.

The Tigers (38-48) salvaged a split of the four-game series after dropping the first two games to the Blue Jays (39-45) on Friday and Saturday.

Rookie left-hander Ryan Borucki produced a quality start in his home debut. He struck out eight batters and allowed two runs and six hits over seven innings of work.

Borucki's eight strikeouts tied Roy Halladay for the second most by a Blue Jays pitcher in their home debut. Jose Nunez holds the record with 11.

The Tigers opened the scoring in the first inning, hitting four consecutive one-out singles. The last one, an RBI for Victor Martinez, gave Detroit a 1-0 lead.

The Blue Jays responded in the fifth inning when Teoscar Hernandez drove in Curtis Granderson with a groundout to tie the game 1-1.

Detroit reclaimed the lead in the sixth inning. John Hicks grounded into a fielder's choice, allowing Nicholas Castellanos to cross home plate for a 2-1 lead.

The Blue Jays tied the game again in the ninth on a walk from Justin Smoak. The RBI blew a save opportunity for Tigers pitcher Joe Jiminez, who was in the closing position after Shane Greene was placed on the 10-day DL before Monday's game.

Notes: The Blue Jays recalled Gurriel Jr. and optioned Darnell Sweeney to triple-A before the game. Gurriel started at second base. ... The roof was closed for the third consecutive game because of a heat warning issued for the city of Toronto. ... Attendance was 29,575.