Ontario’s housing market has been red hot for years now, but that may soon change, and some areas could be hit harder than others.

Since the Bank of Canada began to raise interest rates in order to combat inflation, home prices have steadily declined. Desjardins says that average price of a home in Canada fell 2.6 per cent month-to-month in March and 3.8 per cent in April.

These decreases should continue, the report says, and will be experienced most significantly in Ontario where housing prices could decline as much as 18 per cent.

"We expect the housing market correction in Ontario to be led by a decline in sales activity and prices in smaller centres outside of major urban areas," the report reads.

"We think prices will fall the most in communities that saw the biggest price increases during the pandemic and therefore the most erosion in affordability."

As a result, multiple areas just a few hours outside of Toronto are set to see prices drop, the report claims.

Of these regions, Bancroft could see the biggest price drop, followed by Chatham Kent and Windsor-Essex, the report said. 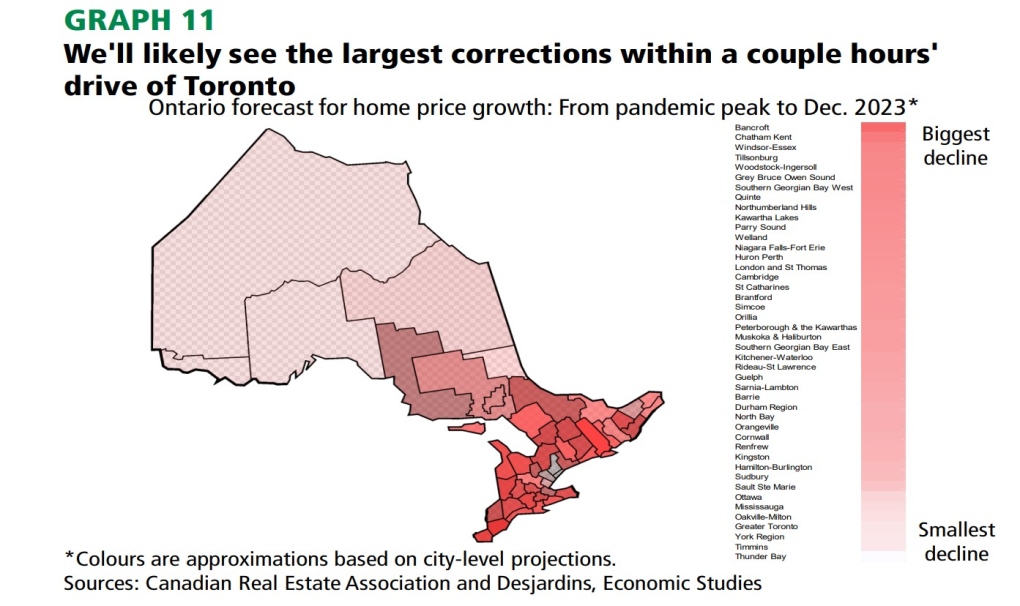 “The sustainability of the prices we were seeing was completely unrealistic,” Brown said.

Because of this, he estimates that prices in these regions could soon drop to pre-pandemic levels.

While rural areas could soon see prices drop, Brown says he thinks Toronto’s market will be slower to cool.

“Toronto has a much better chance of the prices staying higher versus outlying communities,” he said. “That’s because of the city being the economic engine of the country [and] there’s still a huge demand for people to live in Toronto, despite us seeing more of a hybrid work model these days.”

With files from Tom Yun

U.K.'s Boris Johnson defiant even as dozens of officials quit

British Prime Minister Boris Johnson has rejected clamors for his resignation from his Cabinet and across the Conservative Party, digging in his heels Thursday even as dozens of officials quit and previously loyal allies urged him to go after yet another scandal engulfed his leadership.