As 46 fallen firefighters were honoured at the Ontario Fire Fighters Memorial Ceremony in Toronto Saturday, the union representing firefighters says more work needs to be done to protect their own.

Hundreds of firefighters and their families from across the province gathered outside Queen's Park for the annual ceremony, which was also attended by Lieutenant Governor Elizabeth Dowdeswell, Premier Doug Ford and Solicitor General Sylvia Jones.

"Today we honour the everyday heroes amongst us," Premier Ford said as he addressed the crowd. "Their legacies will live beyond today."

The names of 46 deceased firefighters have been added to the memorial, which now lists 828 Ontario firefighters who have died in the line of duty, or from occupational illness or disease. 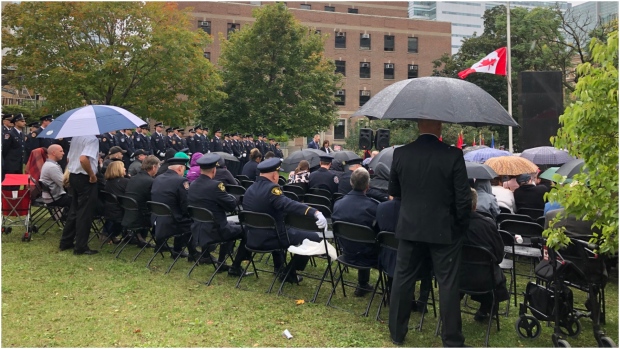 "Today's firefighter is an all-hazards responder. So where they were maybe solely focussed on suppression in the past, they're running a multitude of calls and being exposed to a multitude of environments, and equally, a multitude of hazards."

The head of the memorial ceremony says while firefighters understand the dangers and health risks, firefighting is not just a job, it's a calling.

"We know that in fires, it's a toxic mix with all the plastics and that in our home, they form chemical compounds and go right through our gear and into our skin, lie latent for many years usually and then unfortunately far too many of ours fall well before their time," chairman Steven Buckingham said.

Retired Windsor Fire District Chief Douglas Topliffe was honoured Saturday. He was 74 years old when he died last year of Glioblastoma, a type of brain cancer. 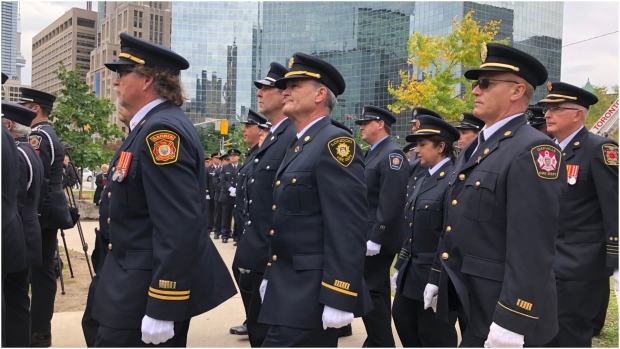 "My dad would tell you, it's not about being brave, it's about making decisions and making the right decisions for the greater good and being involved," his son Jeff Topliffe, who is also a Windsor firefighter, said.

"When my dad was sick, coming home from one of his chemo treatments, I asked him, 'When you started in 1966 and the chief said to you, ‘before I let go of your hand, congratulating you, this is what the end's going to be, are you taking the job or not?' And he said, 'absolutely I'm taking the job.' This was more than a job, it was a lifestyle, it was a vocation, a passion."

The late Douglas Topliffe's two sons and a grandson have all followed in his footsteps and become firefighters in Ontario.

“Are we heroes? No. I'm just doing my job trying to make things better for the people in the communities that we serve," said Jeff Topliffe. "That's what my father did, that's what all of us do here."