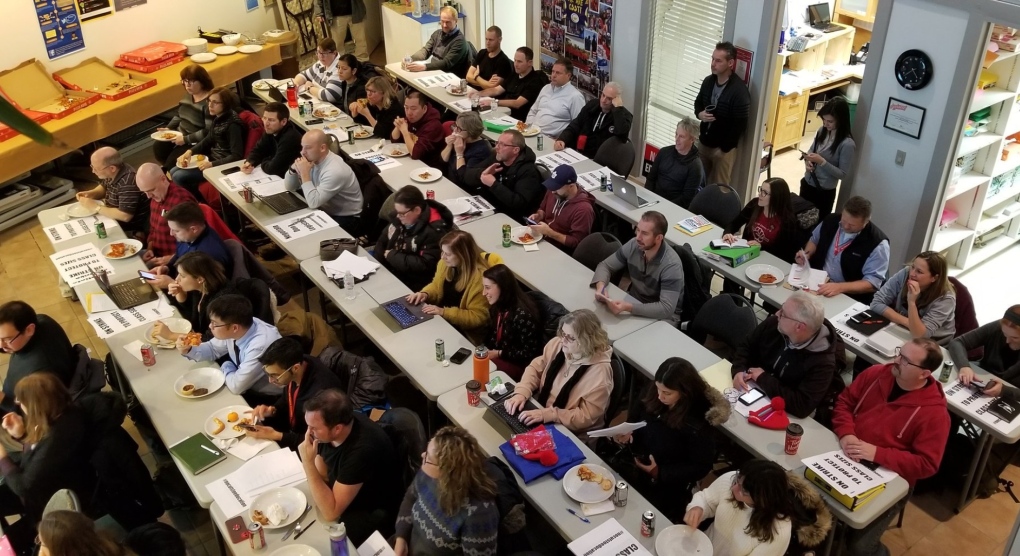 QUEEN'S PARK -- Ontario's public high school teachers have begun preparations for a one-day province-wide strike, even as the negotiators work to carve out a new contract to avert the job action.

Assembled picket signs after work today for Wedesday's one day #OSSTF strike. Of course, we'd rather be teaching, but we must defend public education. We're ready to fight for #NoCutsToEducation because #CutsHurtKids. #onted #ETFO #OPSEU #CUPE #RedForEd pic.twitter.com/lIh9eoZD9P

We are getting ready to stand together as we continue to protect public education #Solidarity #osstf #nocutstoeducation #onpoli pic.twitter.com/pYLrrr6jMg

We’re getting ready for our strike captain meeting @D16OSSTF.

Frontline teachers like @chrisjoncluff are leading this campaign to protect public education.

Watch as Chris explains what has motivated him to be a strike captain @TDSS_YRDSB.#onpoli #osstf #yrdsb pic.twitter.com/QxfB9O48uY

Strike preparations are underway. Our members are ready: “Let us not take thought for our separate interests, but let us help one another.” @OSSTF21 @osstf @ETFOeducators @OECTAProv #NoCutsToEducation #onpoli pic.twitter.com/eRUMR75JbQ

With hours left before the strike deadline the union says the two sides are "still very apart" but both sides seem to be willing to continue bargaining until the 11:59 p.m. deadline.

Bischof says the government is not backing away from increasing class sizes in Ontario high schools to an average of 25 students per teacher and introducing two mandatory e-learning courses next September.

More: What parents need to know about strike action in Ontario school

The Minister of Education countered today that the government has been reasonable and the only party at the bargaining table that has made concessions.

"For 204 consecutive days, the teachers unions have made no moves at the bargaining table," Minister Stephen Lecce said in the Legislature. "Every single entity at the table must be reasonable."

If the two sides are unable to reach a deal, teachers in all provincial public high schools will walk off the job Wednesday morning, forcing schools to shut their doors.

"All TDSB high schools will be closed to students," TDSB spokesperson Ryan Bird said. "All non-striking staff would still have to show up to work."