Sir John A. Macdonald statue toppled during rally in Hamilton 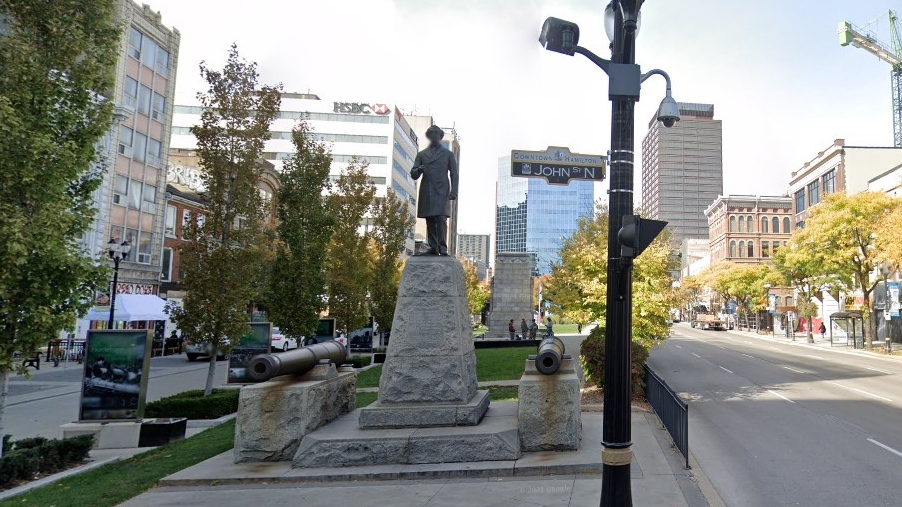 The statue Sir John A. Macdonald in Gore Park in Hamilton is seen in this Google Maps screenshot. (Google Maps)
TORONTO -

The statue of Sir. John A. Macdonald at a Hamilton park was brought down during a rally in the city Saturday afternoon.

Hundreds of demonstrators gathered on the steps of Hamilton City Hall at noon for the Unity Rally organized by members of the Indigenous community. It comes after city council voted against removing the statue of Canada’s first prime minister from Gore Park.

“This decision is deeply disturbing to our Indigenous community,” a letter issued by organizers before the rally read.

From city hall, demonstrators marched to Gore Park, where Hamilton police say, “an individual scaled the statue and the statue fell.” Videos posted on social media show the moment Macdonald’s figure was pulled down.

Macdonald is considered one of the architects of Canada’s residential school system that took Indigenous children from their families to assimilate them.

The recent discovery of thousands of unmarked graves in former residential school sites across the country ignited a national reckoning over Canada’s treatment of Indigenous peoples.

“The purpose of a statue is to assert, promote and celebrate cultural values. By keeping this statue in a public space, it acts as a reminder of the values that lead to the forcible removal of Indigenous children and the destruction of families,” the letter read.

“It invokes great pain and forces community members to relive the trauma for which Sir John A. MacDonald is partially responsible.”

Hamilton police say they have made no arrests and are investigating the incident.