A 'brazen' shooting at a child's birthday party in Rexdale Saturday evening left a man and three children, including a one-year-old boy, injured, Toronto police say.

Emergency crews rushed to the area of Tandridge Crescent and Byng Avenue, east of Albion Road, just before 8 p.m. for reports of shots fired.

Officers arrived and located four victims – a one-year-old child, a five-year-old girl, an 11-year-old boy and a 23-year-old man with gunshot wounds.

Toronto police Supt. Ron Taverner told reporters at the scene that the one-year-old was grazed by a bullet while the man was shot in the leg.

All were transported to trauma centres via an emergency rush.

Toronto paramedics said they took a total of five victims to the hospital. One of the children is in life-threatening condition, one is in serious condition and the third sustained minor injuries.

They also took two men to the hospital, one with serious injuries and the other with minor injuries. It is not known at this time if the fifth victim sustained gunshot injuries.

Police said they could not confirm how many people were at the gathering at the time of the incident. 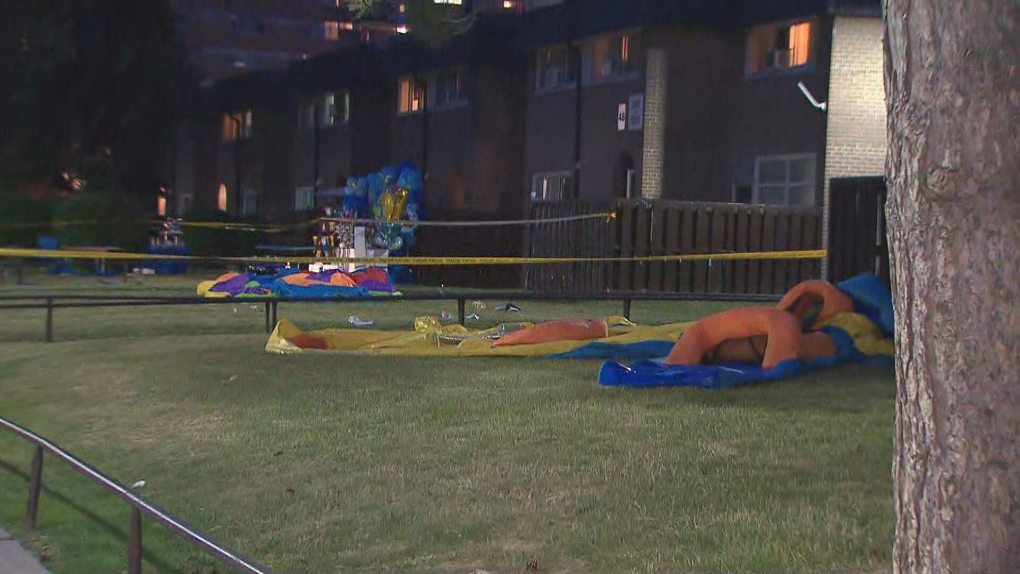 A shooting happened at a child's birthday party in Etobicoke that sent four people to hospital, including three children.

"It's unconscionable. It's hard to believe," Taverner said.

When asked if this was a targeted shooting, he said it is too early in the investigation to determine that.

"But at this particular time, it doesn't look like any of the people that were shot were particularly targeted. It seems like that they were just there and happened to be… ended up being shot by the shooters."

Taverner said they believe the suspects fled the scene using a vehicle that was seen speeding away.

"At this particular time, we're working on descriptions of suspects, and we can't provide anything concrete right at the present time," Taverner said.

In a later update, Duty Inspector Kelly Skinner confirmed that there is more than one suspect involved.

"We don't know what led to the actual shooting," she said, adding that when officers arrived at the scene, it was "chaotic."

"There's nothing more brazen than children outside in a gathering and this kind of violence happening outside right in front of them… It's absolutely tragic."

Skinner said officers are canvassing the area, talking to residents in the neighbourhood for information.

"What we're doing right now is appealing for the community. We're appealing to everybody in this area. This is a tragedy. There were three children who were shot here tonight. We absolutely need your help," she said.