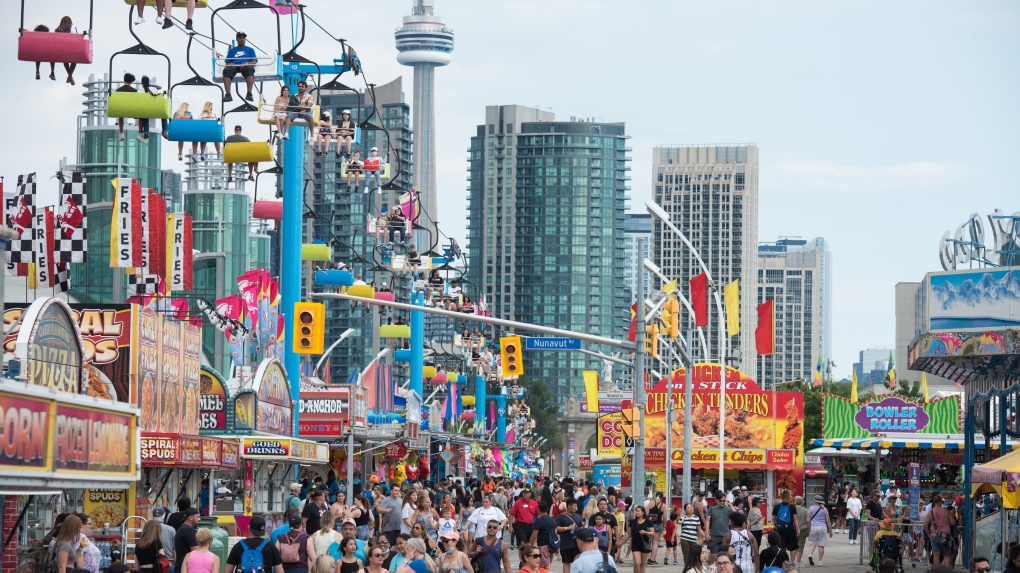 Crowds make their way through the midway during opening day of the Canadian National Exhibition in Toronto on Friday, August 19, 2022. THE CANADIAN PRESS/Tijana Martin

After two years of in-person event and festival cancellations, along with pandemic restrictions that brought tourism as a whole to a standstill, visitors slowly started returning to Toronto in 2022.

But despite the optimism within the industry that tourists will continue to make their way back to the city in 2023, experts say that a full recovery is still a ways away and that the road to get there may have some twists and turns.

“I think the lesson going into 2023 is that recovery isn't linear. There are stops and starts and there are going to be some sectors that maybe take a bit longer than others, while there are going to be others that shoot ahead,” said Pauline Larsen, interim Executive Director of the Downtown Yonge Business Improvement Area (DYBIA).

The DYBIA is home to many downtown hotels, which historically have put up business travelers who have come to Toronto for conferences and other events, including the Chelsea Hotel – the largest in Canada by number of rooms, with over 1,500.

For decades, business travel has been the main driver of economic growth in the tourism sector in Toronto, but business travellers have been slow to return as many companies have continued to allow their employees to work and meet remotely.

“The business market hasn't come back yet. Not to the same extent that it was pre-pandemic,” said Wayne Smith, interim Director of the Hospitality and Tourism Management department at Toronto Metropolitan University (TMU).

“This is the combination of inflation and that a lot of businesses adapted to being work-from-home. They adopted a lot of the Zoom technologies and things like that, and [they’ve said]: ‘It's really expensive to travel now, why should we send you on a trip when you can just have a Zoom call?’ right”

Smith says the good news is that leisure travel to Toronto has rebounded over the past year, spurred by the return of many events and festivals that had been cancelled in 2020 and 2021, such as the Toronto International Film Festival (TIFF), Pride Toronto and the Canadian National Exhibition (CNE).

In fact, the only major Toronto event that didn’t return in 2022 was the Taste of the Danforth. Its absence was due to logistical issues associated with the revamp of Danforth Avenue during the pandemic, organizers say.

“We've seen the power of these kinds of events to drive visitation and resident engagement too,” said Andrew Weir, Executive Vice President of destination development at Destination Toronto.

“Part of it is people coming into the city but it's also very much about Torontonians getting out and doing all those things that we couldn't do for almost two years or at least parts of two years. And we saw that strong rebound which is encouraging.”

Even before the return of large-scale, in-person events this year, many businesses across the city that typically rely on tourist dollars had to turn to Torontonians for help.

And with many would-be tourists from the Greater Toronto Area (GTA) unable to travel abroad, many neighbourhoods in the city got that help.

Toronto’s Waterfront BIA saw record-high pedestrian counts during the first year of the pandemic in 2020 while Torontonians flocked to outdoor spaces after restaurants, bars and other public spaces shut down.

“Funnily enough, pedestrian counts are actually not as high as they were the first year of the pandemic this year but we obviously saw a return to a lot more regional tourism. [Billy Bishop] airport was up to around 85 per cent of normal flights and that's a regional airport,” said Tim Kocur, Executive Director of the Waterfront BIA.

But as restrictions on international travel continue to loosen and Ontarians resume their trips abroad, Toronto’s tourism industry will need to attract international visitors of their own – and that may take some time.

“The year before [the pandemic], our waterfront was about 17 per cent out-of-country visitors. The year after the pandemic, it was less than 1 per cent,” Kocur said.

“That was obviously the biggest change; very few visitors from out of the country.”

Smith says that the number of international travelers to Toronto should pick up in the coming months and years, especially since the city is home to such a diverse and multicultural population that has family, friends and connections from all over the world.

But, Smith says, leisure tourists can’t prop up the industry on their own.

That dynamic is sure to be a story to watch in the city in 2023 as it continues to recover from the economic damage inflicted by the pandemic.

“The reality is that leisure travel can only take you so far in a market like Toronto,” Smith said.

“Basically, if you think of the industry as a whole, you break even with your business travel and you make your profit with your leisure. If you don't have the business travel base, you're not going to make up for it with leisure.”

Weir says Toronto is expected to have a good year in terms of business travel in 2023, but says the repercussions of the pandemic are still likely to be seen years down the line, as large conventions and major events are typically booked four or five years in advance.

“Next year is going to be a strong year. We'll have a lot of meetings because a lot of that is rescheduled meetings from 2020 and 2021 that were cancelled that we've been able to rebook into 2023, but when we look a little further out at 2025 and 2026, that pipeline is not quite as strong.”

A SHORTAGE OF LABOUR

The tourism industry as a whole also has a more pressing and existential issue to contend with; a shortage of labour.

Many workers who left the hospitality and tourism industry at the onset of the pandemic have not returned, leaving businesses with an increasingly small worker pool to pull from.

“The COVID-19 pandemic exacerbated an already tight labour market. Many Ontarians who formerly worked in the tourism and hospitality industry moved to other industries and occupations,” the report read.

“As a result, there has been an 81 per cent increase in Ontario tourism and hospitality job postings in spring 2022 compared to spring 2019.”

Weir says the labour shortage is a “huge issue” and says the industry will need to look to multiple stake-holding partners to solve it.

“There's work to do, absolutely, and it's going to take private sector, government and a lot of partners to come together to really address this for the long term, not just a short term fix.”

Smith says that to some degree, he can only speculate about what tourism in Toronto will look like in the coming years because of the unprecedented nature of the pandemic, which impacted the industry more than any other event that he can remember.

“It's a really fascinating marketplace right now. The industry had it so good for so long, but when it got hit, boy, did it get hit hard,” he said.

Still, Larsen says there’s a reason to be optimistic as we head into 2023.

“Based just on our data for the first three quarters of the year, we've seen a consistent and steady return to [the downtown] for shopping and foot traffic,” she said.

“Our retail vacancies are lower than they were and all the indicators are tracking in, generally, the right direction, so we can start the New Year with hope and optimism.”