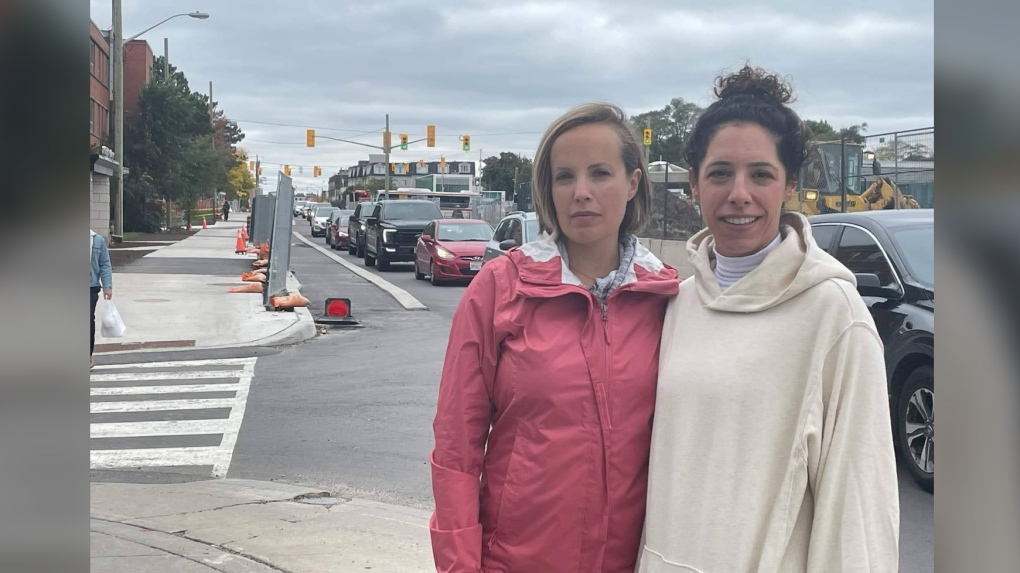 From left, residents Sophie Milman and Lora Sloan are “cautiously supportive” of a public inquiry into the Eglinton Crosstown LRT. They’re calling for compensation and support to be offered now to communities directly impacted by the delayed transit line.

After more than a decade of dusty, noisy construction, people who live and operate businesses along Toronto’s Eglinton Avenue were looking forward to the new Crosstown light rail transit (LRT) line finally opening this fall.

However, just over a week ago, Metrolinx, the provincial agency responsible for regional transit in the GTA, announced in a blog post that the $5.5 billion project’s completion is once again being pushed back. They said the consortium hired to build the line has “fallen behind schedule, (is) unable to finalize construction and testing.” No definite timeline for when the new LRT will open was provided.

“It’s disappointing, but people were not surprised. There’s construction materials on the street and hoarding every where. There was no way they were going to meet their timeline,” said Louroz Mercader, who manages the York-Eglinton Business Improvement Area (BIA), which is home to the hard-hit Little Jamaica neighbourhood.

“There’s no end in sight. It’s hard for us as a business community to plan ahead. We can’t look to the future. It’s such a mess. We can’t plan anything.”

The new transit line was initially slated to be completed by 2020 but construction has been plagued by delays.

In October 2020 the consortium responsible for the line's construction, Crosslinx Transit Sollutions, filed a lawsuit against Metrolinx and Infrastructre Ontario in which they argued that they should not be held accountable for delays or cost overruns because of the COVID-19 pandemic.

A judge sided with the consortium and the two sides renegotiated an agreement in December 2021 that would have seen the line substantially completed by September 2022 and in operation several months later.

The project, however, has been delayed and once again the patience of people who live nearby has evaporated.

Milman said aside from the noise and mess, people are driving unsafely through construction zones in her area and cutting through already tight side streets to avoid slower-moving main roads.

Lora Sloan, who founded the new community group, said last week’s news, although not a surprise, was “unexpected” as community members, local politicians, and even Metrolinx representatives had done walkabout just two days before the LRT delay was announced.

“We were told then that the construction would be out of the neighbourhood by the end of the year,” she said.

“The community’s trust has been eroded by the lack of communication from Metrolinx. Even the city was not aware of what’s happening as updates are not being provided. We feel in the dark and our councillors are equally clueless.”

Metrolinx did not respond to CP24.com’s multiple requests for comment. 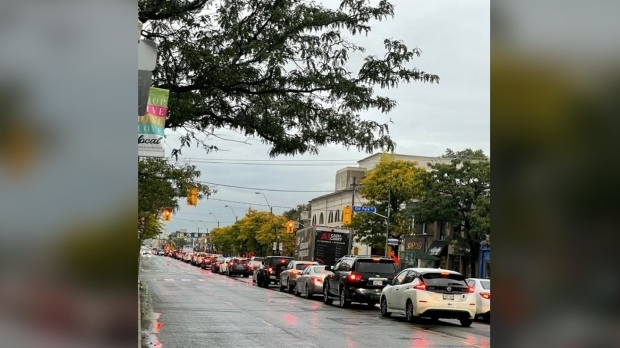 Equally frustrated by the ongoing delays and what they both call a “lack of transparency,” councillors Mike Colle (Eglinton-Lawrence) and Josh Matlow (Toronto-St. Pauls) said they intend to file a motion at the first city council meeting after the Oct. 24 municipal election that would call on the province to undertake a public inquiry into why the Eglinton LRT is taking so long to complete and what can be done to ensure the myriad of delays and issues encountered while building this new transit line do not repeat themselves.

Colle said a public inquiry is the best way for the city to get answers.

“(Metrolinx) obviously has something to hide, that’s for sure. … (People) have suffered enough,” he said..

“This is the largest public transit construction project in North America and we’ve got a bunch of incompetent people who are not telling the truth about it.”

Colle said he and Matlow are working with several local BIAs and residents groups to drum up support for the inquiry so that city council supports it.

“We really want to hold Metrolinx and the province to account,” he said.

Matlow said the impacts of this LRT project, which have been exacerbated by numerous delays, are unbearable for area residents and unsustainable for local businesses.

“This is not just a little bit of traffic, it’s horrible. And for small businesses, every month that this is delayed is another month of hanging on by a thread. Many have already gone under,” he said, noting a public inquiry would serve two purposes: to provide those directly impacted with the information they deserve and to ensure such a “mismanaged and incompetently executed project” doesn’t happen again elsewhere.

“There needs to be a real understanding of why this project has been so screwed up and not do it again,” Matlow said, adding communities along the line are being treated as “collateral damage.”

“There needs to be a plan to support both residents and businesses who are negatively affected by these major transit projects. … Enough is enough.”

Toronto-St. Paul’s MPP Jill Andrew said people in her riding, especially those living in Little Jamaica and Midtown are “dismayed to learn of yet another (LRT) delay.”

“It is especially difficult on Black-owned small business owners and store owners along Eglinton. Many businesses have closed, employers have been unable to keep staff on payroll because customers simply aren’t able to access many of the businesses they once did due to over a decade of construction promises and the dual devastation of the COVID-19 pandemic,” she wrote in a statement provided to CP24.com.

Andrew said the Province must immediately pass her motion to provide “financial supports for Little Jamaica and small businesses in midtown disproportionately hurt by these delays.”

First introduced in late 2020, it calls on the Ontario government to implement a 'Little Jamaica' Small Business Economic Health and Community Wellness Strategy that among other things provides $30,000 in compensation for struggling local businesses.

The motion also proposes a mandated task force to ensure transparent communication between Metrolinx, the Ministry of Transportation, and Little Jamaica businesses, and the historical designation of the neighbourhood to “recognize its unique arts and culture contributions and ensuring affordable housing is included in all new builds.”

The NDP is also demanding that the Ford government defer HST payments for a specified period of time to help struggling local businesses in the interim and commit to a commercial eviction ban.

Like her municipal counterparts as well as area residents and local business owners, Andrew said Metrolinx and the Province must immediately provide answers and accountability for the ongoing LRT construction delays.

She also said she’s in favour of a public inquiry, underlining that it mustn’t “become another stall tactic or report collecting dust on the shelves.”

“(A public inquiry) needs to express what went wrong and what will be done to make this right for people of Toronto-St. Paul’s and beyond and community needs to be on board,” Andrew said.

“Many community members have contacted me frustrated about the unbearable noise pollution and traffic jams caused by these construction delays. The government needs to give our community concrete answers as per the deadline of this construction, create and deploy immediate grants tailored to cover losses, keep staff on payroll, and cover rent.” 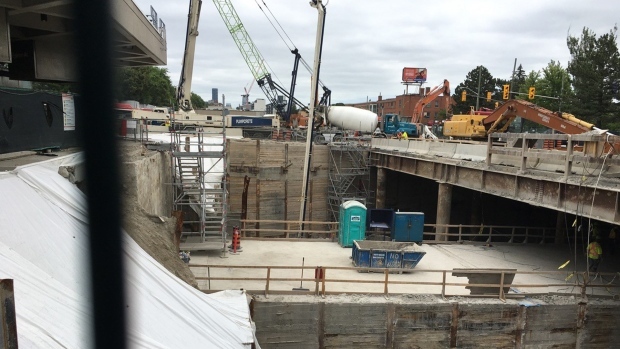 Mercader, of the York-Eglinton BIA, said the local business community has long called for a public inquiry.

“It could set the standard for how these projects are handled. … It’s in everyone’s best interest that these (major transit) projects are done properly,” he said.

“I think it’s important we learn from the mistakes that have happened and are continuing to happen. … We can’t be making the same ones over and over again.”

“By the time the Eglinton LRT opens most of these businesses aren’t going to be there any more,” he said, pointing to an initiaitve in Montreal where the province set aside $25 million to help local businesses survive during major transit construction.

“A public inquiry shouldn’t be a replacement for actual compensation and support. … Something needs to be done to make things more manageable for the community until the job is done,” said Milman, noting the municipality also needs to play a stronger role and have a stronger voice in supporting communities hard hit by this project.

“This (inquiry) shouldn’t be a way for Metrolinx to say they’re doing something. We are asking for immediate help or a reprieve now,” she said, adding a public inquiry is a good way to inform those working on future transit projects, notably the Ontario Line.

-with files from CP24’s Joshua Freeman