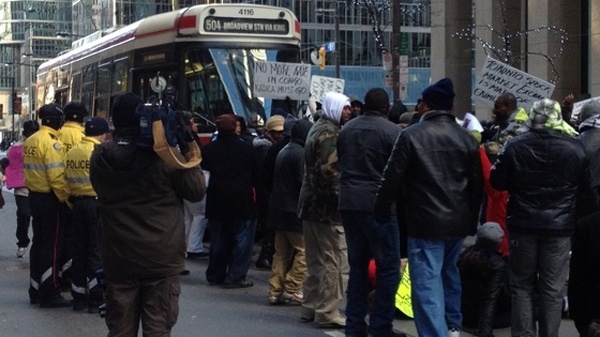 Protesters rallying over election violence in the Democratic Republic of Congo blocked traffic at King Street West and York Street before moving north to the U.S. consulate on Friday, Dec. 23, 2011.

A protest at the U.S. consulate closed the streets outside the building for a brief time Friday afternoon.

Police said the protesters, who rallied on University Avenue south of Dundas Street West, were part of a Congolese demonstration which had been congregating at various locations in the downtown core throughout the day.

A few hours earlier a crowd estimated at about 300 people had blocked Bay Street and Dundas Street West.

The group, which has held similar rallies in the past few weeks, is protesting violence in the African country following an election.

The Democratic Republic of Congo held a presidential election in late November, which remains in dispute. Opposition candidates have accused the incumbent President Joseph Kabila of fraud and threaten to reject the outcome of the vote.

Earlier this month, three people were arrested after a clash with police outside the downtown consulate, where as many as 150 Congolese protesters chanted in the streets.