Premier Doug Ford is navigating the snow-covered streets of Toronto working to assist drivers who may be caught up in the winter storm hammering much of Ontario on Monday.

“I’m just in my 4 x 4 pickup trying to help people out. I just picked some gentleman up and dropped him off at home but I just encourage everyone to stay at home,” Ford told NEWSTALK 1010’s Jerry Agar.

In images sent to CTV News Toronto by the premier’s spokesperson, Ivana Yelich, Ford can be seen digging out vehicles that appear to be stuck in snowbanks at two intersections in Toronto.

The premier's efforts come as a blizzard warning issued by Environment Canada has now ended but a winter storm warning for Ontario remains in effect.

The blast of winter weather Monday morning was so significant that the city’s Don Valley Parkway and Gardiner Expressway were closed due to the poor conditions on the road, both of which have fully reopened. 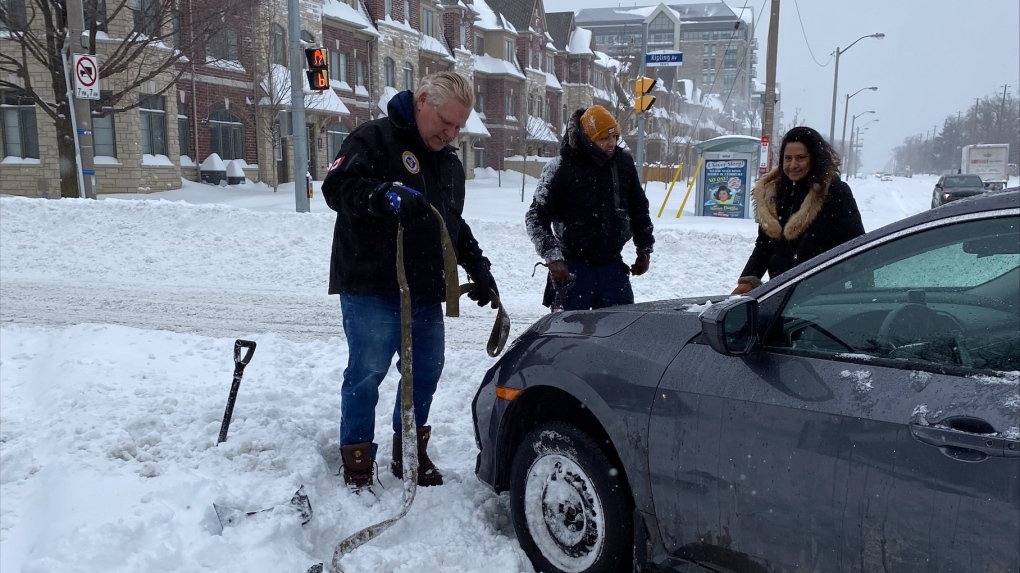 Ontario Premier Doug Ford is seen digging out a vehicle stuck in a snowbank on Jan. 17, 2022. (Ivana Yelich)

Schools in Toronto, York Region and other parts of Ontario were also closed to in-person learning due to the large accumulation of snow, which could reach 60 centimetres in some areas by day’s end.

A full list of affected schools is available here.

“If you can give someone a lift, they’re stuck in their car, pull over, if you have a 4 x 4, give them a lift somewhere and get them home safely. It’s an absolute disaster right now,” Ford said.

Speaking to CP24 Monday morning, Ford said it’s hard to recall when the province last saw this much snow while advising residents to exercise caution if they try to clear it.

“Be careful. Don’t feel like it's essential that you clear the snow right at this point,” Ford said.

CTV News Toronto has compiled a list of when you can expect your street to be plowed which can be found here.

Ford wasn't the only person helping rescue those stranded in the middle of the road. On Saint Germain Avenue, neighbours came together to help free a fire truck that was stuck in the snow. About a dozen people with a variety of shovels and snow blowers could be seen in video of the incident.

Thunderstorms kill 2 in southern Ont., knock out power in parts of Que.

As the May long weekend kicked off, a massive thunderstorm in southern Ontario and Quebec brought strong wind gusts that knocked down trees, took out power and left at least two people dead.