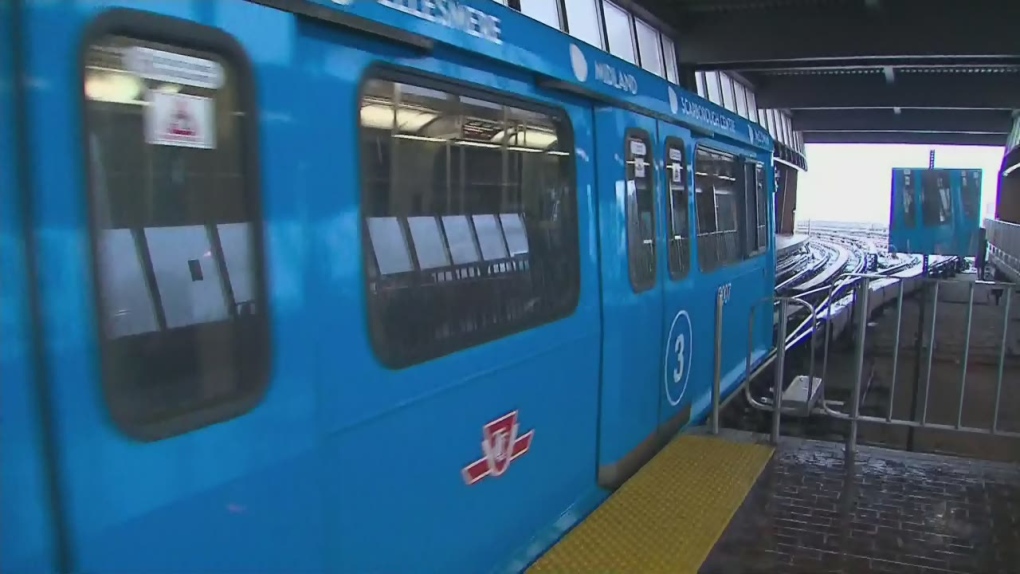 The Scarborough RT will soon be decommissioned but a portion of the aging transit line could be converted into a dedicated busway while construction is completed on the extension of the Line 2 subway.

The TTC has previously indicated that the RT will be scrapped in 2023, slowing the commutes of many Scarborough residents who would have to ride buses along busy city streets until the subway extension is finished in 2030.

But a report that will go before the TTC board next week recommends a stop-gap solution, which would see a roughly four-kilometre portion of the RT between Kennedy and Ellesmere stations converted into a dedicated bus right-of-way until the subway is complete.

Staff say that the change would still make for longer commutes, with the average trip from Scarborough Centre Station to Kennedy Station taking 15 minutes via the busway rather than 10 minutes on the RT.

However, that is a significant reduction from the 25-minute journey that commuters could expect while travelling on replacement buses along Kennedy and Midland roads.

It should be noted that the conversion of the right-of-way couldn’t begin until service is suspended on the RT sometime in late 2023 and staff say that it would likely take two years to complete, meaning that it would be ready to welcome commuters no earlier than late 2025.

Staff estimate that the capital costs associated with the project would be $49.5 million. Only about $2 million of that cost is currently funded. A further $67.8 million in funding will be required to fund operating costs of the replacement buses between 2023 and 2030.

“The TTC through the city has requested funding from the province for the Line 3 bus replacement service given the shift in the delivery schedule for the Line 2 East Extension. This is subject to ongoing discussions between the parties,” staff say in the report.

The Scarborough subway extension was initially scheduled to be completed by 2026 but the timetable was pushed back after the Ford government assumed responsibility for the project.

Staff say that the cost of maintaining the Scarborough RT until the end of 2023 will total $132 million and it is no longer feasible to keep the line in service past that point.

“After more than 37 years of continuous operation, the vehicles on Line 3 Scarborough are now more than 10 years past their design life,” staff note in the report.

In working to determine how to supplement service while the subway is built, staff examined a number of options for bus replacement service but ultimately concluded that the dedicated busway would “provide customers with the quickest and most reliable service.”

They says that there will be a peak requirement of 66 additional buses to supplement service following the decommissioning of the RT, with that requirement then reduced to 57 once the busway is in service two years later.

In a series of messages posted to Twitter on Thursday, the transit advocacy group TTCriders welcomed the proposed busway, calling it a “big win for the thousands of Scarborough residents who took action” following reports that regular bus service would replace the RT for at least seven years.

The group, however, said that the TTC still needs to commit to “bus lanes and other priority measures” while the dedicated right-of-way is built.

“The TTC report says transit priority measures will be required to improve service reliability while the busway in the RT corridor is being constructed, but haven't committed to bus lanes or other measures yet,” they note.

COVID-19 hospitalizations due to Omicron are vastly underreported: grassroots organization

Analysis by a grassroots organization of scientists reveals hospitalizations from the Omicron variant of the virus that causes COVID-19 could be 70 per cent higher than what has been reported since December.

As home prices drop, here's what you can get in Canada's most affordable markets

CTVNews.ca has compiled a list of homes in some of the most affordable regions across Canada, as many real estate markets see drops in average prices.

The federal government is adding new passport service locations across Canada as a backlog in processing applications continues.