Police looking for suspect after man stabbed, another sprayed with unknown substance in Oshawa

Police looking for suspect after man stabbed, another sprayed with unknown substance in Oshawa 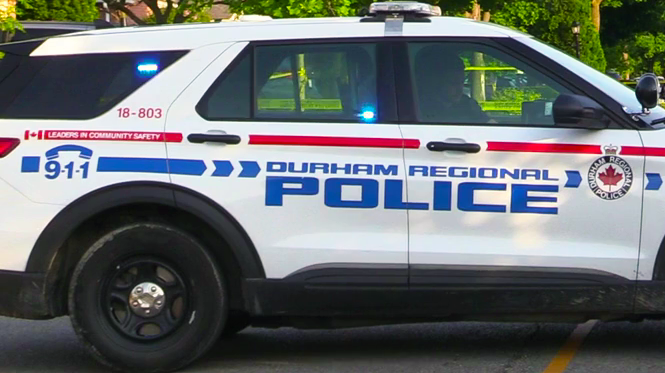 Durham Regional Police cruiser is seen in this undated photo.

Durham police are looking for a suspect after an altercation in Oshawa that resulted in a man being stabbed Thursday evening.

Officers were called to the area of Simcoe and John Streets around 11 p.m. for a stabbing.

When they arrived, officers located a 42-year-old man with stab wounds. He was taken to hospital with non-life-threatening injuries.

According to police, the victim told responding officers that he was in an altercation with another man before the stabbing.

A second victim, police said, later approached officers and reported being sprayed in the face with a noxious substance during the altercation.

The male suspect fled the scene on a bike. On Friday, police released a description of the suspect. He is a Black male in his 30s, stands five-foot-six, with short black hair.

174 dead after fans stampede to exit soccer match in Indonesia

Panic and a chaotic run for exits after police fired tear gas at an Indonesian soccer match to drive away rampaging fans left at least 174 dead, most of whom were trampled upon or suffocated, making it one of the deadliest sports events in the world.

Violence and a deadly stampede that erupted following a domestic league soccer match Saturday night marked another tragedy in Indonesian football. Here's a look at how the chaos occurred and what is being done to prevent future incidents.