Toronto’s latest murder victim was gunned down as he walked in the city's west end early Saturday morning.

Police said they received several reports of gunshots being fired around 1:40 a.m. in the area of Oakwood Avenue and Vaughan Road.

The victim has been identified as 42-year-old father Craig Campbell, who lived in Toronto.

Police have been on scene since the 9-1-1 calls came in, but so far haven’t been able to provide a suspect description, other than to say the shooter got away in a dark coloured SUV.

“Wether or not Craig Campbell was the target, I don’t know at this time.” 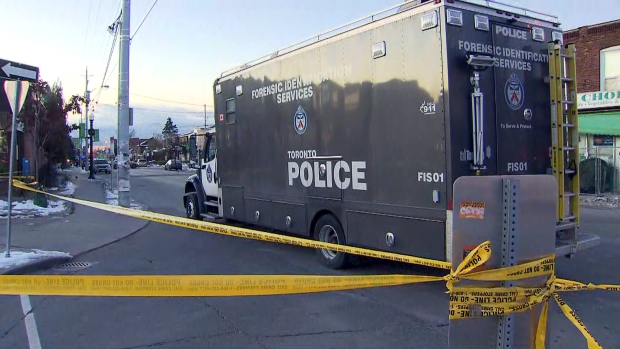 Community reacts to violence in the area

For the people who live in the neighbourhood, this is just the latest example of the deadly gun violence plaguing the city.

Another said she has lived in the area for four years, but the recent level of violence makes her feel uncomfortable in her own neighbourhood.

Local politicians were on scene, speaking to worried residents about the incident.

The councillor representing the neighbourhood said his residents just want to live in peace. Josh Matlow said, “they want what every community wants in the city, to be able to go to bed that night and not wake up the next morning to hear about a shooting a block away from them.”

Matlow said he has already arranged a public safety meeting for next week and said that in light of the shooting, the meeting has taken on even more significance for the community.

I’m at the corner of Oakwood & Vaughan, at the site of another fatal shooting. The gun violence in our city is unacceptable here and in any neighborhood. I’m hosting an OV Community Roundtable Meeting this Wed, Nov 20, 7PM at the Oakwood Village Library. https://t.co/tDbIISu5Ip pic.twitter.com/nAE7hJ7W6N

Councillor Mike Colle, who represents Ward 8 just north of the crime scene, said ge is calling on Ottawa and the province to “fix the laws,” to reduce gun crimes.

“Right now the bail system is a total joke. So it’s got to be more than the Toronto Police, it’s got to be the feds and the province have got to do something, and when will it stop? When a shooting occurs at Queen’s Park or Parliament Hill?

Another disgusting and tragic gun death.When are the Feds and the Province going to help our City end the carnage? pic.twitter.com/BlEEWSQk5A

The public safety meeting for the Toronto-St.Paul’s community is set to take place at the Oakwood Village Library this Wednesday at 7 p.m.