TORONTO -- Dozens of people opted out of receiving their second COVID-19 vaccine shot at a mass immunization centre in Brampton on Tuesday after being told that they would have to mix-and-match doses.

This morning, a lineup formed outside of Save Max Sports Centre in Brampton with eager residents waiting to receive their second dose and become fully immunized against the disease.

However, before the clinic opened its doors they learned that only the Moderna shot would be available to those 18 years and older, while the Pfizer-BioNtech shot would be offered to those between 12 and 17 years old as it’s the only approved shot for that age range.

Crowds of people, who presumably received Pfizer for their first shot, were then seen leaving their spots in line as they refused to mix vaccine doses.

“My wife and I had Pfizer and so we don’t want to mix it, so as soon as the announcement came out we decided we’re leaving too because getting the same vaccine we know is okay, mixing it we’re not sure, so I’m not going to take a chance,” one person in line told CP24.

People’s hesitancy with interchanging doses appears to be heightened after an official with the World Health Organization (WHO) warned on Monday about “dangerous trends” with mixing and matching vaccines.

"It's a little bit of a dangerous trend here. We are in a data-free, evidence-free zone as far as mix and match," WHO’s chief scientist Dr. Soumya Swaminathan said in response to a question about booster shots at a press conference.

Later on Monday, Swaminathan clarified on Twitter that she was warning against individuals deciding to mix doses on their own.

“Individuals should not decide for themselves. Public health agencies can, based on available data,” she wrote.

In June, Canada’s National Advisory Committee on Immunizations (NACI) announced that the Pfizer and Moderna mRNA vaccines can be mixed when a second dose of the same vaccine is not readily available.

The group also said that a first dose of the AstraZeneca COVID-19 vaccine, which uses a different delivery mechanism than an mRNA vaccine could safely be combined with a second shot of an mRNA vaccine.

Ontario fell in line with NACI’s recommendations giving the green light for residents to mix-and-match vaccines in order for people to get fully vaccinated as quickly as possible.

On Tuesday, the province's top doctor reaffirmed that Ontario will continue to follow NACI's advice on mixing doses.

"These vaccines, the mRNA vaccines I'll speak to specifically, are authorized for the same purpose to prevent COVID-19, have the same indications, the same schedule, are for the same population. They contain a similar type of antigen and, hence, the same type of antibody response. They have very, very similar safety efficacy, immunogenicity and reactogenicity," Dr. Kieran Moore, chief medical officer of health, said during a press conference.

"We completely agree with the NACI approach and declaration of the interchangeability of the mRNA vaccines and the ability to follow AstraZeneca with the mRNA vaccine if that's the decision that the individual makes," he added.

Associate Medical Officer of Health Dr. Barbara Yaffe added that it is "unfortunate" that people are turning down vaccines. 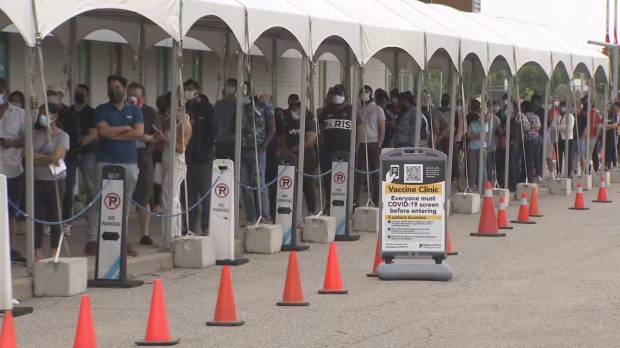 However, some people remain doubtful about mixing doses due to the mixed messaging.

“I’m nervous. I’m borderline diabetic and I feel like I shouldn’t mix it but then people are still saying, even my doctor is saying it’s okay but I just don’t feel comfortable,” one person who was in line at the Brampton immunization centre said.

While speaking to CP24 Tuesday morning, the Chair of Social Medicine at the University Health Network said Swaminathan's statements don’t conflict with NACI’s recommendations but rather address those trying to get booster shots worldwide.

“There is actually no real disagreement on whether we have to pick the WHO over where NACI’s at or where the provincial ministry is at,” Dr. Andrew Boozary said.

“There’s activity in different parts of the world where people are not going in line with where the public health agencies are at and making their own decisions and trying to get third or fourth doses, which again there’s no evidence for,” he added.

"The reality is this was a comment that was made by a scientist at the WHO, it didn't represent an official statement by that organization, and it was a scientist who was speaking on the topic of citizens making their own decision around boosting and getting third or fourth doses. So, I think unfortunately it really was a comment that was misunderstood and unfortunately a bit unhelpful around our own ongoing vaccination campaign," Medical Officer of Health Dr. Lawrence Loh told CP24.

Brampton Mayor Patrick Brown said he understands people’s hesitancy about mixing doses but said he will continue to follow the advice of the country’s top doctors.

“I’m not a physician myself, but I trust Canada's top physicians and the recommendation from NACI continues to be that this is the best interest for Canadians to protect themselves against the great dangers of COVID-19,” he told CP24.

Brown urges all residents to get vaccinated as soon as possible to prevent serious illness from the disease.

“If you want to protect yourself, join those that are vaccinated because this is essentially a health crisis for those that are unvaccinated. Don't be part of that segment that continues to be vulnerable to serious health complications.”