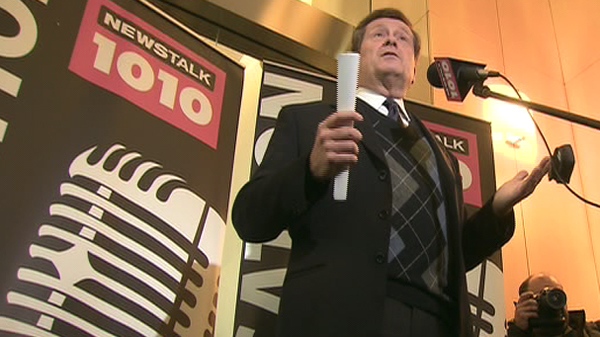 John Tory speaks to reporters from News Talk 2010 offices, where he is currently employed, on Jan 7, 2010.

Mayoral candidates are reacting in various ways to news that a potential political heavyweight could join the race as early as next week.

The Toronto Star published a report Tuesday that suggests John Tory could reverse an original decision to stay out of the fight, which many see as a lacklustre affair.

However, a final decision has not yet been made. Tory himself would not flatly deny the report.

In an email sent out to news media Tuesday evening, Tory said: "I wish I could be more helpful, but I find the interviews tough when I don't have anything new to say."

Candidates have until 2 p.m. on Sept. 10 to file nomination papers or withdraw their candidacies. The election will be held on Oct. 25.

Tory ran for mayor in 2003, finishing second to David Miller.

Tory also served as leader of the provincial Progressive Conservative party, but led that party to defeat in the 2007 election and lost his own seat in the process. He stepped down as leader after failing to win a March 2009 byelection in what had been a safe Tory riding.

However, many see Tory's image as a fiscal conservative who is socially progressive as something that would be attractive to Toronto voters.

Coun. Rob Ford -- one of the leading candidates, and one preaching a strong, fiscally conservative message -- said Wednesday he wasn't worried about a possible Tory candidacy and that he would be remaining in the race until the finish.

Tory did very well in suburban Toronto in 2003, where Ford also has strong support.

On Twitter, a social messaging service, candidates Sarah Thomson, Rocco Rossi and Coun. Joe Pantalone have not said anything about the Tory rumour.

"I took him at his word as I'm sure Torontonians did when he said he wasn't going to run," he said.

Tory said in January that he wouldn't be running. He took on impartial roles as head of the Toronto City Summit Alliance and moderating mayoral debates, Smitherman noted.

Smitherman wouldn't speculate on how a possible Tory candidacy might affect his own chances.