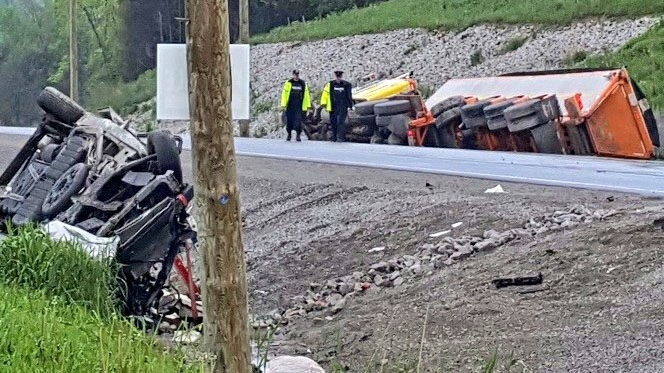 A crash involving a car and gravel truck near Oshawa on Monday morning left two people with injuries, according to police. (Durham Regional Police)

A person is seriously injured following a multi-vehicle crash near Oshawa on Monday morning.

It happened around 9 a.m. at the intersection of Winchester Road and Thornton Road.

A car was struck by a gravel truck, according to Durham police.

Ornge Air Ambulance was called the scene to attend to the driver of the car.

The victim was taken to Lakeridge Health Hospital in Oshawa, where paramedics will transport them to St. Michael's trauma centre in Toronto, Durham police Const. George Tudos told CP24.

They remain in critical, but non-life-threatening condition, Tudos said. There is no word on the victim's age or gender.

The driver of the transport truck also suffered minor injuries, he added.

A hydro pole was knocked down in the collision. It is not clear whether it is causing any power outages in the area at this time.

The roadway is closed for a police investigation.

Investigators say it’s too early to tell what caused the crash. So far no charges have been laid.