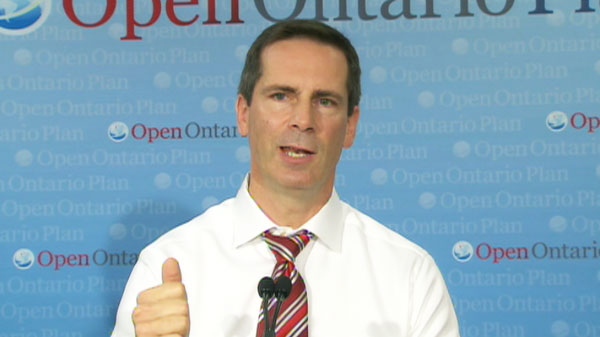 TORONTO - The Opposition is demanding that Premier Dalton McGuinty come clean and release a report on future electricity costs amid fears that soaring hydro bills are heading even higher.

The Ontario Energy Board acknowledged in a Sept. 17 letter that it conducted a "preliminary analysis and forecast" of electricity costs, but doesn't plan on making it public.

The Conservatives, who uncovered the letter, asked McGuinty 10 times in the legislature whether he would make the report public.

But the premier refused to acknowledge the existence of the OEB report and instead kept bringing up the former Tory government's record on hydro rates.

"The fact of the matter is that they quietly presided over the gradual decay of the electricity system in the province of Ontario," McGuinty told the legislature.

"They refused to make essential investments in new generation and in new transmission. They refused to work with Ontarians so that we might together conserve electricity and reduce demand."

"There's got to be a reason why Dalton McGuinty is burying that report," he said outside the chamber.

"Clearly, rates have already gone through the roof and he's going to put them up higher. I just wish the premier would be honest, would tell families exactly how much hydro bills are going to go up, and make that report public."

Energy Minister Brad Duguid said he wasn't even aware of the OEB report.

"There are a series of reports we receive, whether it be from the Ontario Energy Board or others in the sector, that make projections as to where costs are going," he said.

Consumers should have "greater clarity" about future hydro costs once the government releases its 20-year energy plan at the end of December, Duguid said.

Given the heat the Liberals are taking over rising electric bills, NDP energy critic Peter Tabuns said he doubts they'll release anything that predicts higher rates before next year's election.

"They want to make sure that between now and voting day they can say whatever they want to whatever crowd they're in front of," he said.

A spokesman for the OEB, which regulates Ontario's electricity and natural gas sectors, confirmed it isn't planning to release the report.

"It was work undertaken by staff as part of its ongoing industry monitoring, and wasn't prepared for any proceeding, consultation or other public forum," said spokesman Alan Findlay.

"Given its preliminary and incomplete nature, the analysis is not in a thorough or reliable form that would responsibly add to the public's or the sector's insights into costs."

The Liberals have been dogged for weeks over rising home electricity bills, with opposition parties blaming McGuinty's green energy policies, as well as July's addition of the HST, for soaring costs.

They say they're swamped with complaints from homeowners, who've already been hit with an extra eight per cent for electricity because of the HST, plus the costs of installing smart meters and moving to expensive time-of-use pricing.

Environmentalists are also warning that consumers may be hit with another rate hike this spring.

Ontario Power Generation has already asked to raise its rates next March to start paying for the re-build of the Darlington nuclear units, said Jack Gibbons of the Ontario Clean Air Alliance.

OPG is seeking a 6.2 per cent rate increase for "everything they want to do, including the re-build," Gibbons said. For the average residential customer, it would raise their bills by 1.7 per cent, he added.

"It's unacceptable to consumers to raise your rates for the highest cost and the highest risk option to meet our electricity needs," Gibbons said.

"Consumers want the government of Ontario to give them new supply that's clean and green, but at a reasonable cost. And nuclear power doesn't meet that test. The cost is way too high."

The province announced in 2006 that it wanted to build two new nuclear reactors to supply electricity, but has yet to sign a contract to proceed with the multi-billion project.