A Jeep discovered by Ontario police in a shipping container has been traced back to its owner after the vehicle was stolen over the weekend from a driveway. 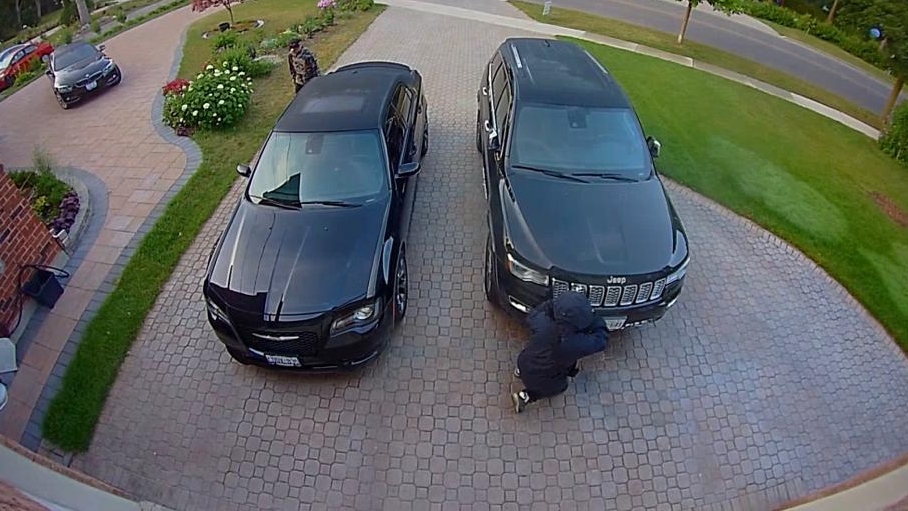 A man is seen clipping a Jeep's car horn in a theft caught on a home surveillance camera on July 10, 2022 (Supplied). In surveillance footage obtained by CTV News Toronto, the two incidents – just over two months apart – can be seen in full.

A ring camera installed in front of the garage, along with a motion sensor, notified his parents that someone was on their driveway on May 8. When they checked the app, they saw two men. One of them was kneeling down and clipping the horn of the truck to stop the car door alarm from sounding.

To scare the two men away, Ricketts said his parents set off the house alarm, which projects through a microphone outside of the house. Right away, they fled the scene.

The second attempt happened on Sunday. “They got a little smarter this time,” Ricketts said.

Again, two men arrived, but this time, they came at 6 a.m. once the sun had risen. That way, the house’s motion sensors were turned off because they are only active at night.

One man began clipping the car horn, which the owner had fixed since the last attempt. Meanwhile, the second man stood on guard by the sidewalk smoking a cigarette.

“They obviously have some sort of computer system to bypass starting the car without a key,” Ricketts said. “And then they drove off.”

Around 8:30 a.m., as Ricketts' father left the house to grab breakfast, he discovered his car was gone. That day, they filed their second police report following the first just weeks earlier.

Immediately, Ricketts identified his parents' Jeep and not long after, the police contacted them to say their car had been discovered. The OPP confirmed to CTV News Toronto that the Jeep was indeed owned by the Ricketts.

“You buy yourself a truck, you park it in your driveway and some thief comes in the nighttime.”