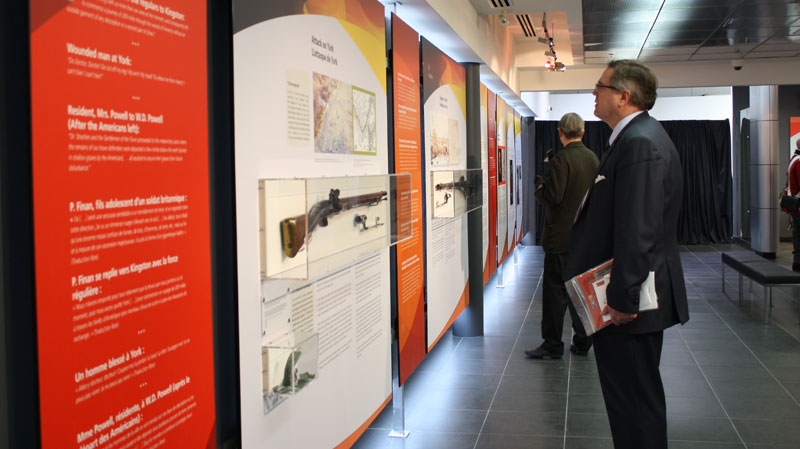 A ceremony was held to commemorate the opening of the new Parliament interpretive centre in Toronto on Friday, Feb. 17, 2012. (Miranda Scotland / CTV)

Beneath an old car dealership at the corner of Front Street and Berkeley Street sits one of Ontario's most significant historic sites, yet many walk past unaware of the memories the location holds.

In 1797 the site was home to the province's first purpose-built parliament buildings, a fact that Ontario Heritage Trust is working to make more Ontarians aware of.

In a Friday ceremony attended by Canadian dignitaries, the organization unveiled the Parliament interpretive centre to teach visitors the history of the site. The exhibit was created by repurposing the old dealership's show room.

It's peculiar that it has taken this long to commemorate such a special historical location, said Ontario's Lt.-Gov. David C. Onley, adding he's not sure why that is. Perhaps it was because of the city's rush to modernize or a lack of interest in preserving heritage sites, he said. Still, it's been a long time coming.

"I think it is quite remarkable that after not just all these years but after all these centuries we now have a reminder that the … first parliament was here in Toronto," Onley said after the ceremony.

The interpretive centre, the opening of which kicked off Ontario heritage week and is meant to commemorate the bicentennial of the War of 1812, will be open for three years.

The building showcases objects that were found during an archaeological dig on the site in 2000. And panels tell the story of four different periods of use on the property.

It's incredible how much history sits beneath this old dealership, said Beth Anne Mendes, curator of the exhibit.

Ontario's first parliament buildings, two single-storey brick structures, played witness too many defining moments in the province's early history, including the birth of its representative government.

The buildings stood for 16 years until they were burned down by invading Americans during the War of 1812. They were later rebuilt but flames claimed them once again. After that the area was occupied by a district jail, followed by an expansive gas works.

Today the site, which is enclosed by Parliament Street, Front Street and Berkeley Street, is split between three owners: the City of Toronto, Ontario Heritage Trust and a private company.

There are discussions going on with the private company to return the land to the city so they can commemorate the entire site. However, the owners have proposed redevelopment plans, which would see two residential towers built on the space.

"I think you can tell by my enthusiasm and hopefulness about the interpretation of the site that I hope we can resolve that in a way that does not interfere with the proper interpretation of this place," Murray said, adding he hopes the new centre will bring awareness to the public.

"As people get to know the history of this place and surrounding neighborhood they'll cherish it more and hopefully we'll have more support for its interpretation and preservation."