Ontario’s 2022-23 deficit will be $1.1 billion smaller than forecast three months ago, as tax revenue grew faster than rising interest costs on the province’s ballooning debt.

The province’s latest disclosure of its finances shows that the deficit for the year is now $18.8 billion, down $1.1 billion from the Ford’s pre-election estimate.

Tax revenue is up $1.2 billion, while the cost of servicing the province’s $427 billion net debt rose by $105 million due to rising interest rates.

Finance Minister Peter Bethlenfalvy said the entirety of the new net revenue would be put against the deficit, with no new funding so far to overcome the ongoing hospital closure crisis.

“I think it’s important we have a prudent and flexible plan going forward and we‘ve done that in this budget,” Bethlenfalvy said. 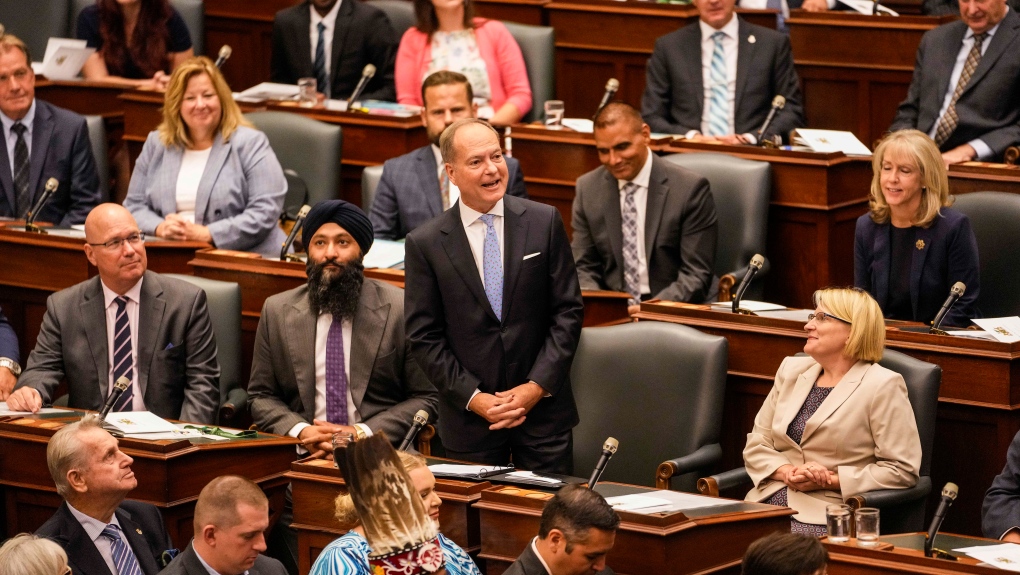 Ontario Minister of Finance Peter Bethlenfalvy tables the budget after Lt.-Gov. Elizabeth Dowdeswell delivered her Speech from the Throne at Queen's Park in Toronto, on Tuesday, August 9, 2022. THE CANADIAN PRESS/Andrew Lahodynskyj

All spending is unchanged from the April 28 budget which was formally re-tabled in the legislature on Tuesday afternoon, save for a five per cent increase in monthly Ontario Disability Support Program (ODSP) payments promised during the election campaign and a new cash offer to parents.

Also contained in the throne speech was a pledge for more cash to parents of school age children.

The province is earmarking $225 million to give to parents as a means to “help their kids catch up” with learning impacted by prolonged school closures during the COVID-19 pandemic.

Using 2021 estimates of expenditure from similar programs, the money amounts to between $90 and $100 per child.

A ministry of finance spokesperson said the government is still unsure if the money will be relayed to parents in the form of a tax credit or direct transfer, but Bethlenfalvy called it a “direct payment.”

Both new commitments will be funded out of a $1 billion reserve and other contingency funds.

He fielded repeated questions from reporters about why ODSP rates could not be increased further given the improving fiscal picture, given the increased rate will still leave recipients in poverty.

The slump in the province’s once red-hot housing market is also weighing on the province’s revenues, with land transfer tax revenue forecast to be $787 million less this year than forecast in late April.

That decline is more than offset by rising sales tax, income tax and corporate tax revenues.

NDP interim leader Peter Tabuns said the hospital situation and rampant inflation were grave enough that the province should have amended its budget.

"Given that inflation has soared since they tabled previously, given the depth of the (hospital) we’re facing they should have substantially amended the budget, they needed a course correction as my colleague has said."

The mysterious woman who allegedly lured dozens of migrants on Florida Gov. Ron DeSantis' flights to Martha's Vineyard from San Antonio has been identified by several media outlets as a former combat medic and U.S. Army counterintelligence agent living in Tampa.